This week I visited EJ Hauser in her studio in Sunset Park. I had only just met EJ a couple weeks ago and was immediately drawn to her personality as much as I had already been drawn to her work. Her studio is something else -- dreamily spacious, stocked with a library that makes you want to pull up a chair and stay for awhile, and occupied by an artist brimming with drive and vivacity. It really got me excited to sit down and draw. 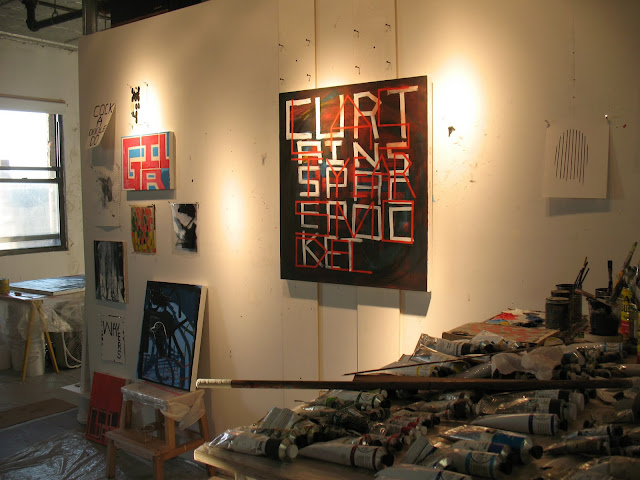 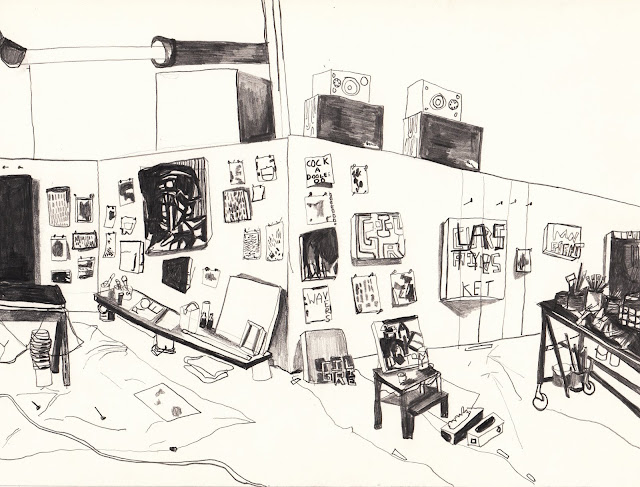 EJ: I think of myself as a sculptor who makes paintings.

Although EJ's work incorporates various ways of approaching painting, it all lives within a world that is very clearly her own. We spoke about how the studio is like a playground for the artist, moving from one corner to the next, climbing up and around all of the artistic possibilities. She expressed to me that she believes you have to keep close your childhood interests when in your studio. How right she is. EJ has enabled this by how she has organized her space. I adored listening to her talk to me about all of her studio's different zones, referring to one section as her "kitchen," where she cooks up ideas and lets experimentation take her to new places within her work. Both large and small paintings were cooking up there. Another area of her studio was left for viewing. A few large paintings were given the space to be seen on their own -- as though they had no relation to the rest and had just shown up on the scene. This was in contrast to another section of her studio, which was thick with works from the past and present, here conversing on the wall, informing one another as well as the artist. 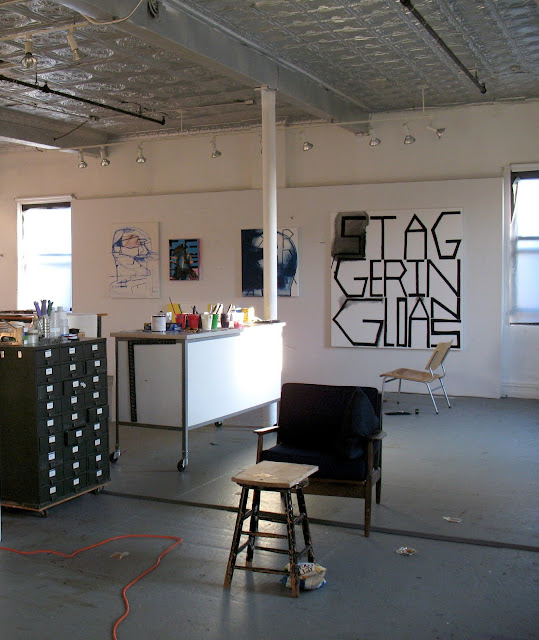 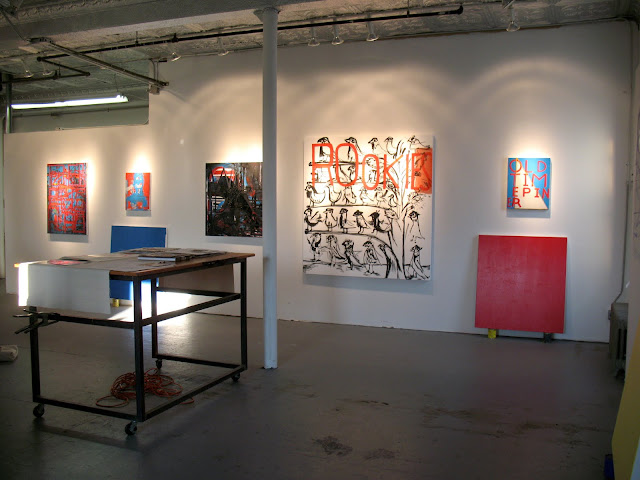 EJ utilizes text in her paintings in a variety of different ways. It can be used as a springboard for creating a lusciously surfaced multi-layered abstraction, a way of presenting the viewer with a single word or phrase that begs to be spoken loudly, or yet again as a way to give homage to a poem or lyric she has been undoubtedly drawn to. One new painting reads "ROOKIES" in bold text across a tree full of confused looking birds. I wondered who these rookie birds were... all of us, I suppose. 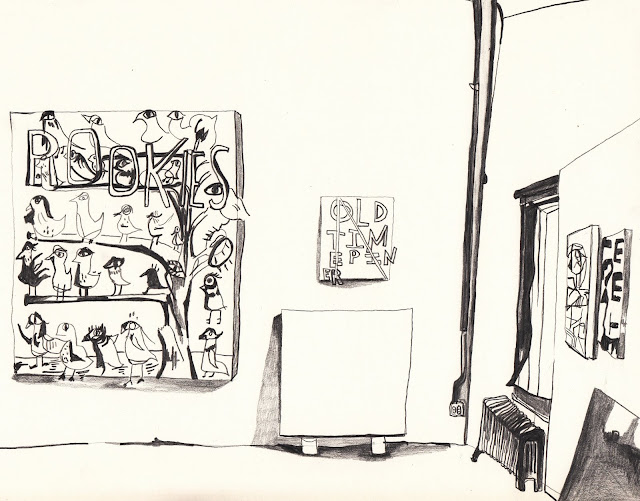 EJ told me about a Charles Burchfield quote that was important to her:
Before starting work go thru all the formal material
many things of vital importance have been lost sight of.

One body of work she spoke to me about happened by collecting paint brush tests on sheets from SUPERPAGES, an all yellow-pages directory. She recently showed this body of work at LUMP in Raleigh, NC. These wave-like formations, also using text, but now as a foundation, breathe cooly next to one another and pop up throughout the studio. It is clear that EJ is constantly looking around her, taking in the world in and outside her space. 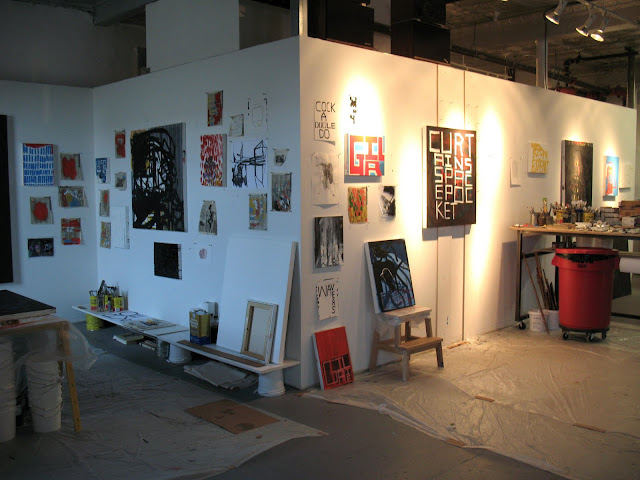 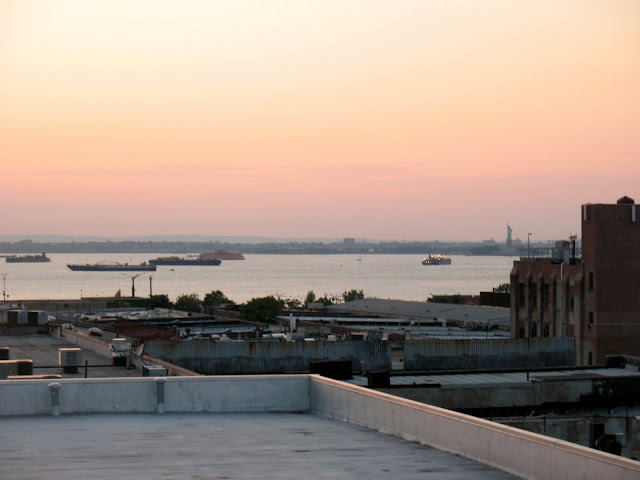 EJ pulled out books to share while doing some delectable DJing as we discussed just what exactly it meant to give your life to this thing called art. As the hours flew by, I listened, learned, looked, and had a wonderfully collaberative day drawing with her. At its end she took me to the roof and showed me why they call this part of Brooklyn Sunset Park. We waved at the Statue of Liberty and watched the Staten Island ferry go by. Another solid Pencil in the Studio with a totally fantastic painter and person. To see more of her work go to http://www.ejhauser.org/.
Posted by Maria Calandra at Tuesday, July 19, 2011 3 comments:

This week I visited with Mike Olin in Bushwick, where he has been painting for the past twelve years. I am lucky enough to visit with Olin quite often, but it was a whole different thing to sit with him and learn (by watching as much as talking) how he makes and approaches his work. His space is something else: loads of suculants reminding him of San Diego where he grew up, huge windows opening to the west, plenty of summer sunlight filling the space, and a serene sense of calm and pleasure in the attitude he holds towards his practice and his life. 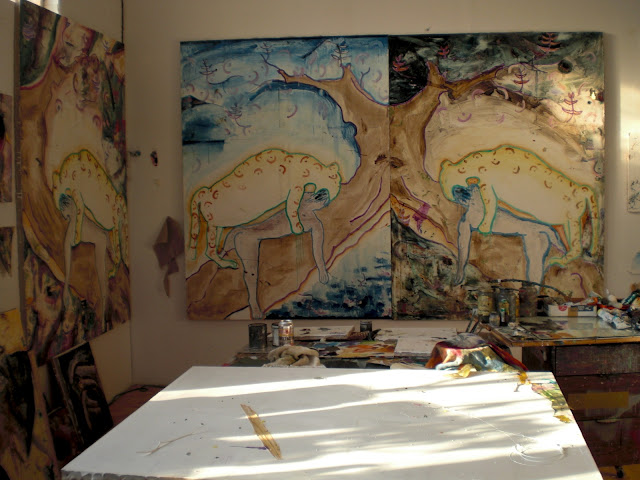 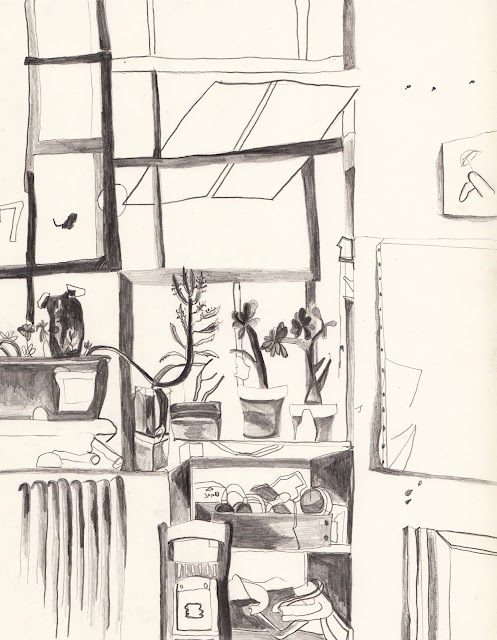 Mike: They were painted at different times of the year and looking back you can kind of tell...I've enjoyed how repeating an image makes influences like that more noticeable.
Olin's most current body of work, which he titles "Human Highway," consists primarily of many duplications of a very small image he found in A Field Guide to Early Man, a science textbook on paleontology from 1987. His fascination with this illustration and the ideas that he has drawn from it have compelled him to make work ranging from small drawings to very large paintings. The image itself is of a leopard preying on a particular early man, Australopithecus Robustus to be exact. The leopard has taken his prey up a tree and has enveloped the human's head in his mouth. It was fascinating to hear Olin describe the picture to me. He kept saying how tender it was, how peaceful. At first viewing, it seems quite different -- pretty brutal, actually. However, after spending time around the numerous renditions of the same image, and studying it for my drawings, I began to see what he meant. This scenario, which existed before the pressures of any kind of society, shows the basic needs of human and animal life. There is a comfort in knowing we weren't always at the top of the food chain; we gave and received as equals at one time, truly being one with earth. It is thoughtful and generous of Olin to put this idea forward, presenting it with innocence and subtlety. This is a topic we should all keep at the forefront of our minds. 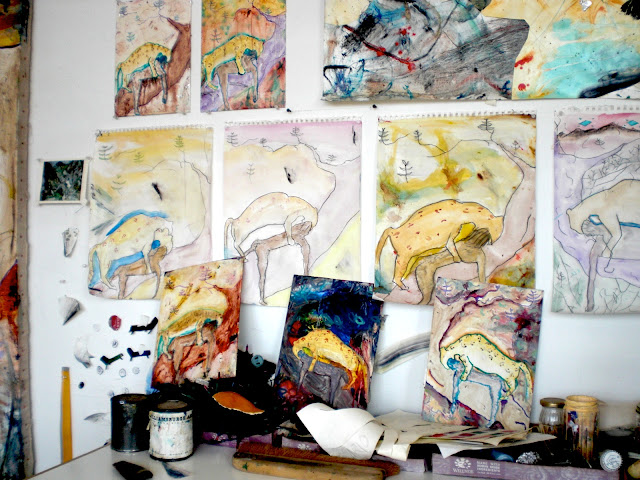 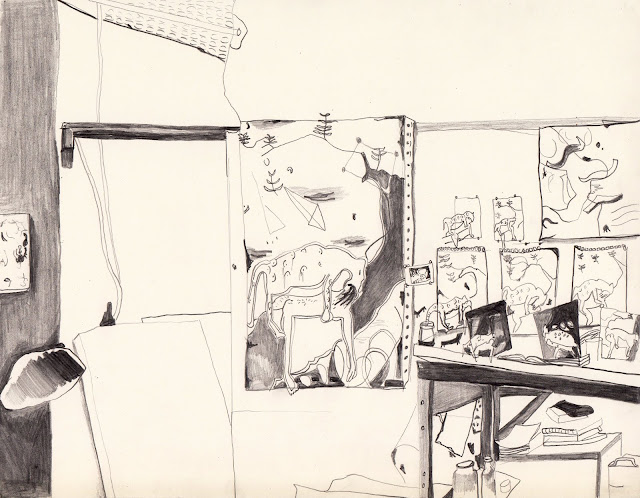 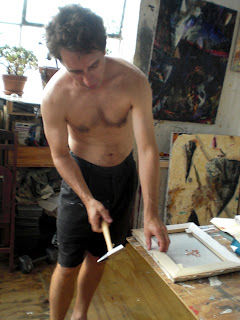 Olin uses copper-plated tacks when attaching his canvasses. He demonstrated this and let me have a try. Satisfying! He then puts multiple layers of gesso on the surface to get it just right. I appreciated his sincerity in emphasizing this. His work has a tactile and visceral quality that is apparent from the use of these processes.

Mike: I try to overlap ways of seeing when making the paintings, offering the viewer many ways to approach it.

Mike also begins each painting by placing what he calls "trash" on the canvas haphazardly. He then goes back and attaches it with gesso. One type of debris he uses time and time again is a handful of mustard seeds. He told me that these seeds suggest spirituality, as they appear significantly in many religions. 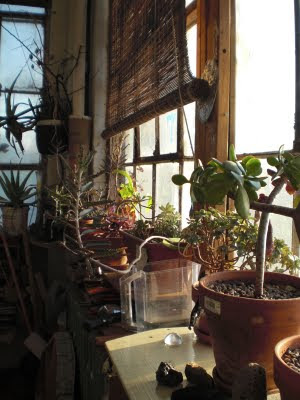 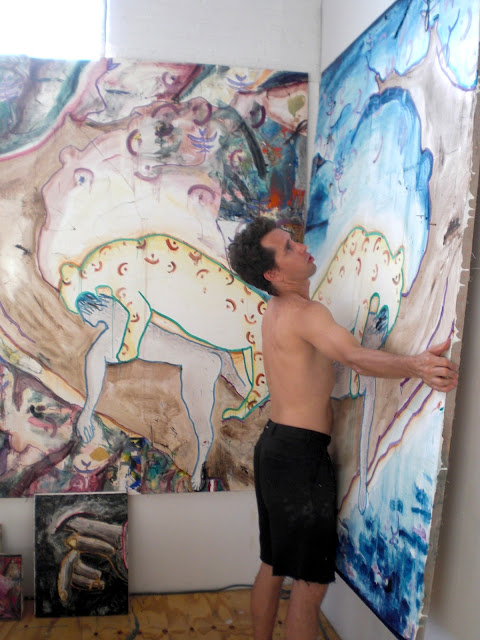 What a fabulous visit. Mike and I spent a relaxing studio day together. It was also in celebration of school ending for the summer (Olin is a middle school art teacher in the Bronx and a damn good one). We shared a tall boy of Sixpoint and talked over our summer plans. Both Mike's spirit and his artwork are a true delight. To check out more go to http://ps1.org/studio-visit/artist/mike-olin. He is also in a group show opening Friday September 16th at Edward Thorp Gallery called "Assembly", be sure to check it out!
Posted by Maria Calandra at Saturday, July 09, 2011 No comments: