Sometimes people make art, sometimes they make music, sometimes they delve into the different realms of performance, be it dance, theater, or performance art. Every now and then an artist comes along who does it all, like a giant art-making machine. In a recent whirlwind studio visit with Michael Mahalchick, I came to the conclusion that he was one of these artists, taking production to entirely new levels and seriously owning it. Mahalchick prompts his viewers to ask themselves questions and barely gives them the answers, allowing their own f-ed up mind to go wherever it might take them. It was like attending my own private performance to visit the lovely Mahalchick in his studio, which is appropriately nestled in his long-inhabited Williamsburg apartment. I was entranced the whole day through with every bit of his fast paced storytelling and truth-slinging art talk. 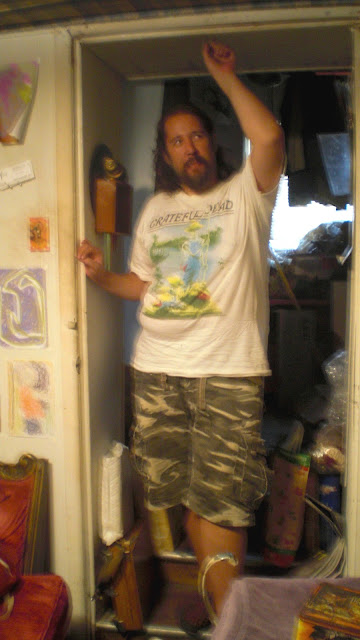 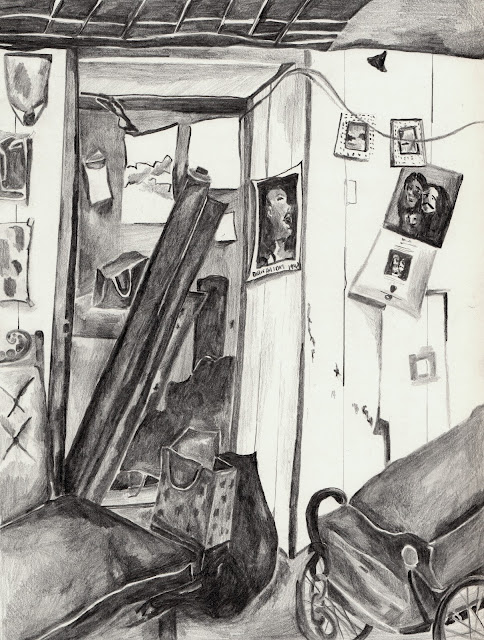 Michael's most recent solo show, entitled "IT," up at Canada this past spring, was an example of how seamlessly he is able to work the multiple layers of his creative spewing into an extraordinary solo exhibition. An opening night performance is where he finalized the installation of the show. The result of this being: a collection of mismatched objects in theatrical groupings on the floor (some as large as a wheelchair or as a small as a Mötley Crüe tape), an array of make-shift wall hangings (decorated with dirty socks and puzzling photographs), and a side show of prepared bacon pinned to the wall of a corner. Michael is giving new life to humanity's leftover dregs, using it in his work as a crude example of our cumulative experiences. As I walked through the show with my boyfriend and his brother, we found separate portions of Mahalchick's sculptural scenes to relate to, each of us lingering in different parts of the gallery a little longer as tidbits of our personal history began to tell us new stories. Later, as we left the gallery, we shared the stories we came up with, in a sense, collaborating with the artist. 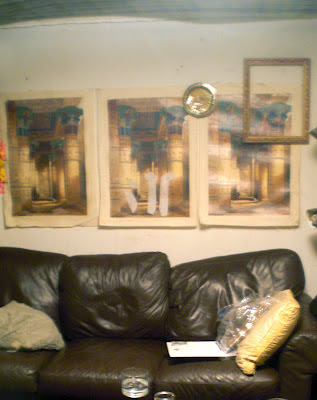 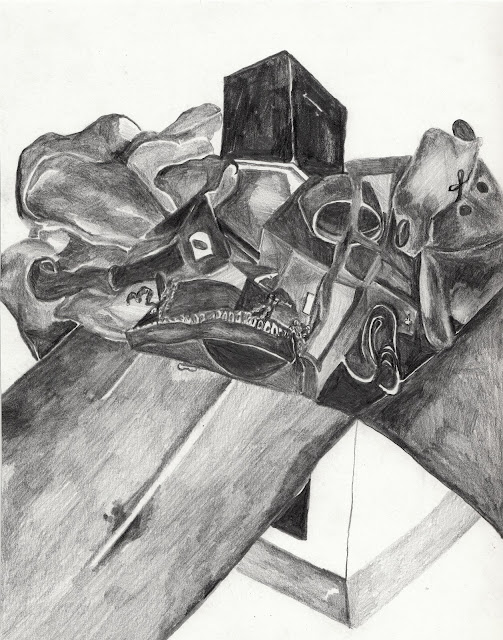 While I sat drawing on his couch, Michael sifted through several boxes of "stuff" he had collected over the years, explaining to me that some of the debris, be it clothing or other, he acquires through friends or fans that drop off bags and boxes with him. It is almost as though he is the artist's Goodwill. He said that from time to time he has even used gifts that he has been given in his sculptures -- be it a painting, or a doodad of some kind or another. Later, when the gift giver comes to the gallery, they feel connected to the piece, seeing their object appear out of context, animated by Mahalchick's mysterious placements. In the midst of our conversation Michael came upon a library book he had found on the sidewalk years ago that had last been checked out in the 70's. Considering returning it, he leafed through its pages to find a poster of the 80's sci-fi movie Lifeforce with free passes on the back. I could see how his mind worked through the different ways he could use this discarded book and poster in an installation or performance. His is a truly captivating studio practice. Michael pulls from a pool of objects as eclectic as our collective unconscious to make his work. And he does it so well. 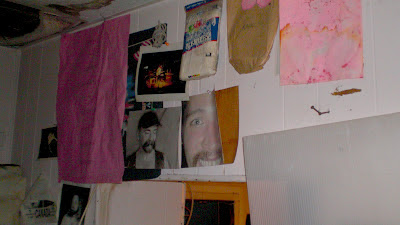 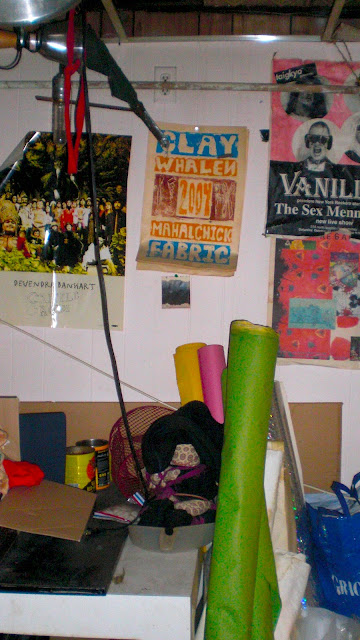 Time swiftly went by as the bags were being emptied, our boisterous laughter filling the air. I made it out this past week to a performance he had co-organized with Lizzie Scott at Klaus von Nichtssagend Gallery, Total Styrene: Breakdown. I watched as the performers moved the styrene around, the white of the plastic matching the brightness of the gallery walls. I saw as Michael took in the performance with excitement in his eye. I wouldn't want to miss another thing that he does. To check out more go to http://www.canadanewyork.com/artists/michael-mahalchick. And if you are a facebook friend of his, you have to check out the haikus he has been dropping, they are really something special. 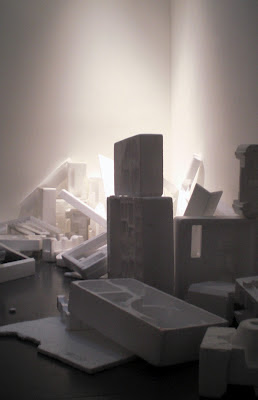