Returning to a studio building in Greenpoint last week, I did a visit with Matthew Fisher. On our way up the stairs he politely asked if it was going to be okay that he had brought along his canine companion. Stoked by the canine and feline friends that many artists have had with them on our visits (Webster, Dill, and Martin to name a few) I let him know that it was more than okay. What a great coincidence that I randomly asked for a date just days after he and his wife had rescued Javier — a handsome little dude from Puerto Rico. I had been jazzed by the prospect of drawing Fisher's paintings for some time and he was just getting ready to ship work off to the West Coast for a show that opens on February 27th at Ampersand Gallery in Portland, Oregon when I finally did. Some real beauts were still hanging around the studio, a couple paintings in their last stages of completion. We talked for a while about Fisher's space and practice; I gave Javier a few scratches behind the ear, and it was time to get to work, with Polish beers in hand, of course. We were in Greenpoint, after all. 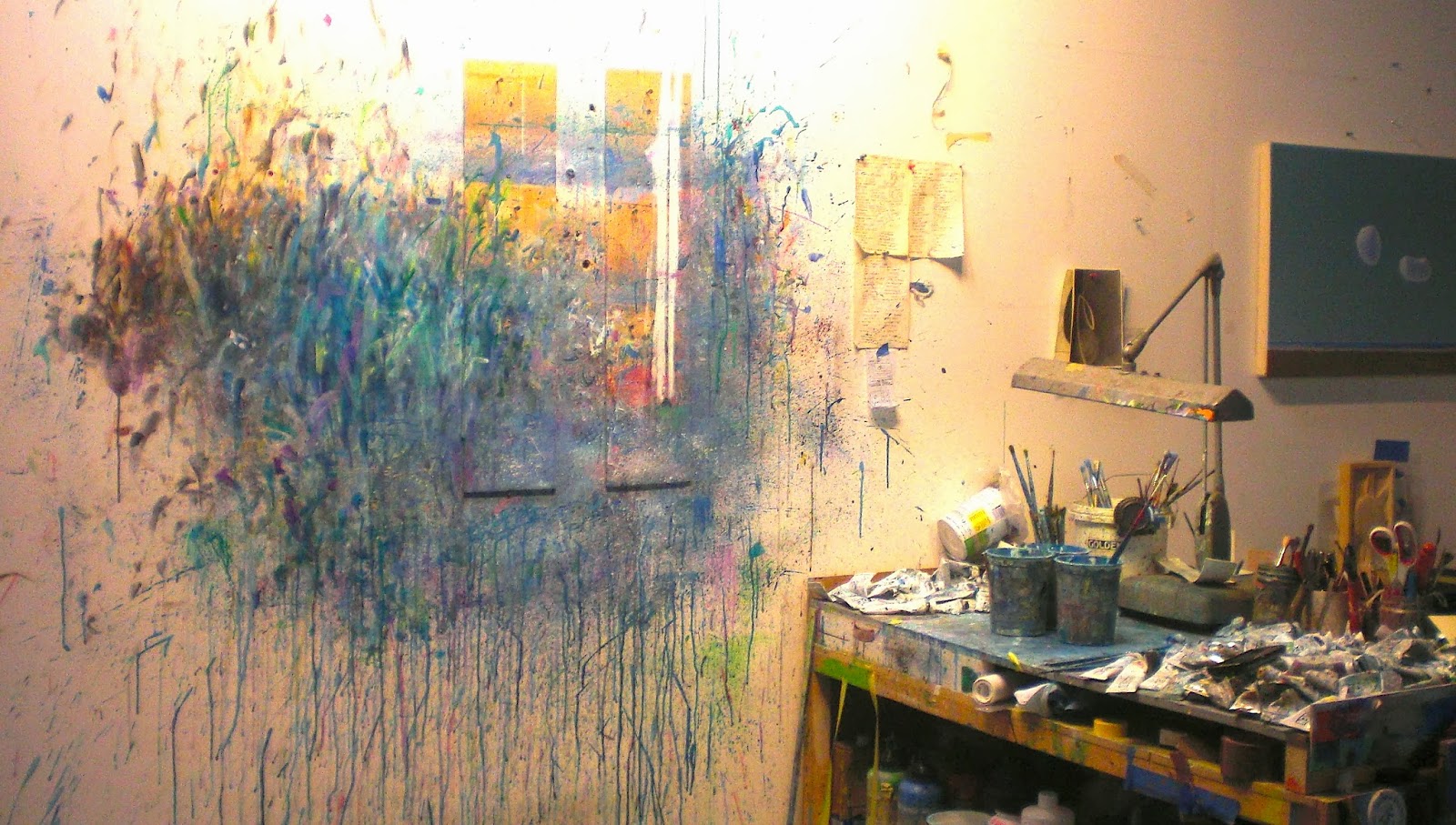 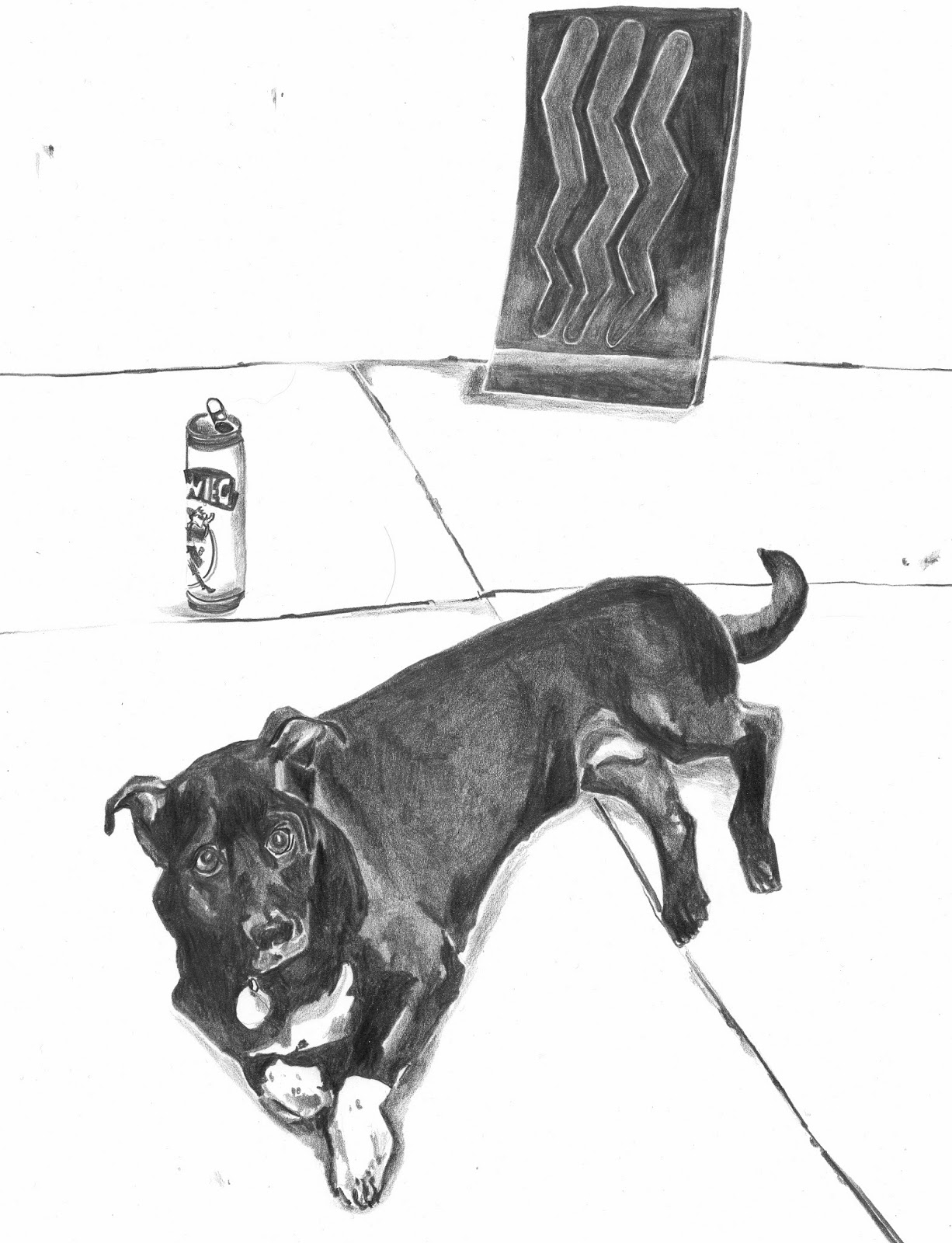 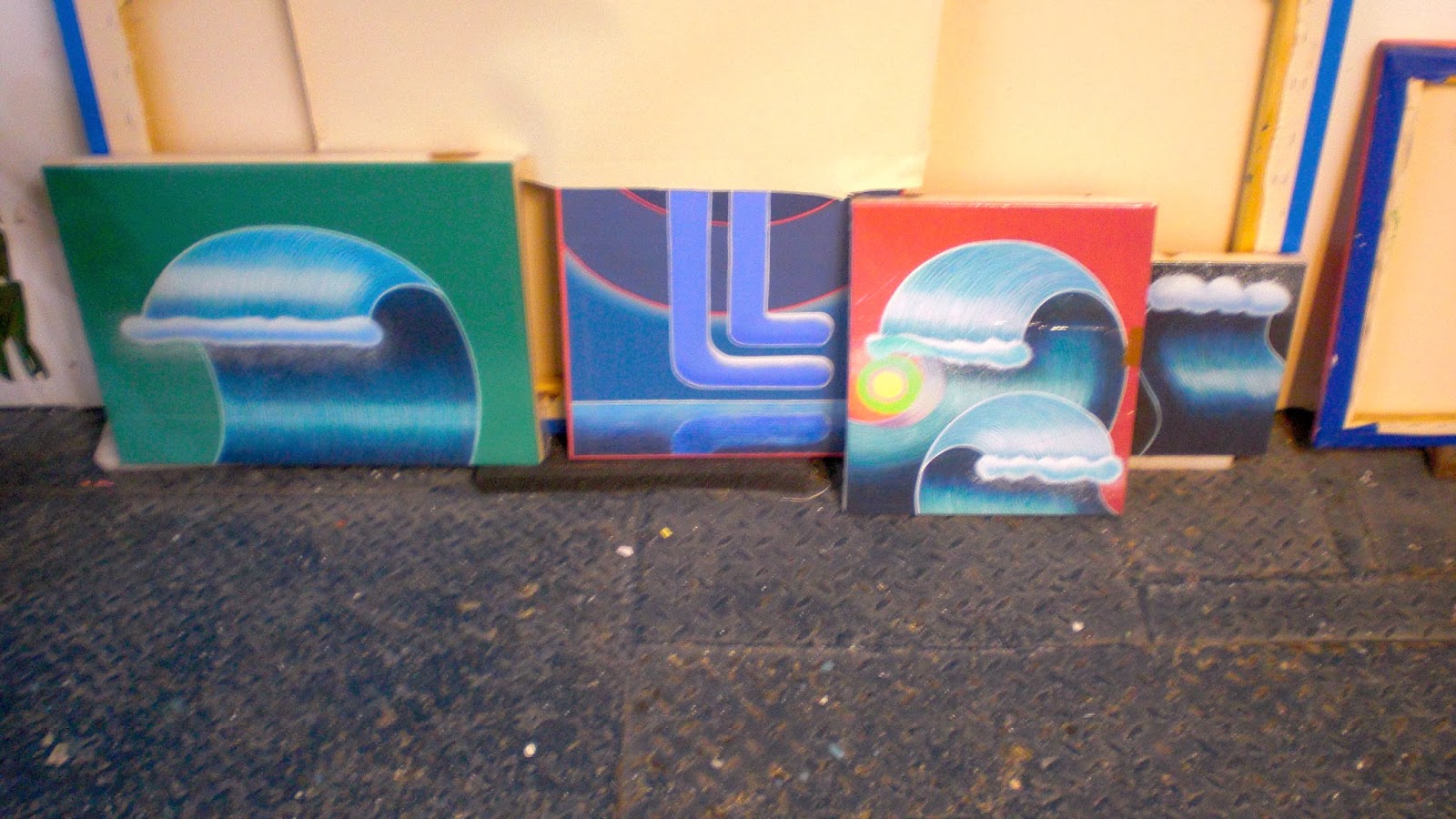 There is a strange familiarity to Fisher's silky, impeccably rendered paintings. It seems as though the material entity that his imagery is describing is locked away somewhere in the future: unreleased album covers, imaginary road signs to sandy coastal drives, labels for a new kind of drink that gives you multiple kinds of buzzes. I talked to Fisher about his recent works' obvious affection for large bodies of water. To quote Thomas Carlyle, "It is through symbols that man consciously or unconsciously lives, works and has his being." It seems that Fisher is living somewhere where waves stand still and minimal sculptures hover in the sky, a collision of his artistry and personal history. He explained that his native Great Lakes can be still and glass-like one minute and roar with waves the next. Matt also spent some of his youth summering on Long Island so I began to see where his visual lexicon was gathered from. And, besides all of this, his glowingly surfaced and deliciously colored canvases signify quite satisfying paintings. 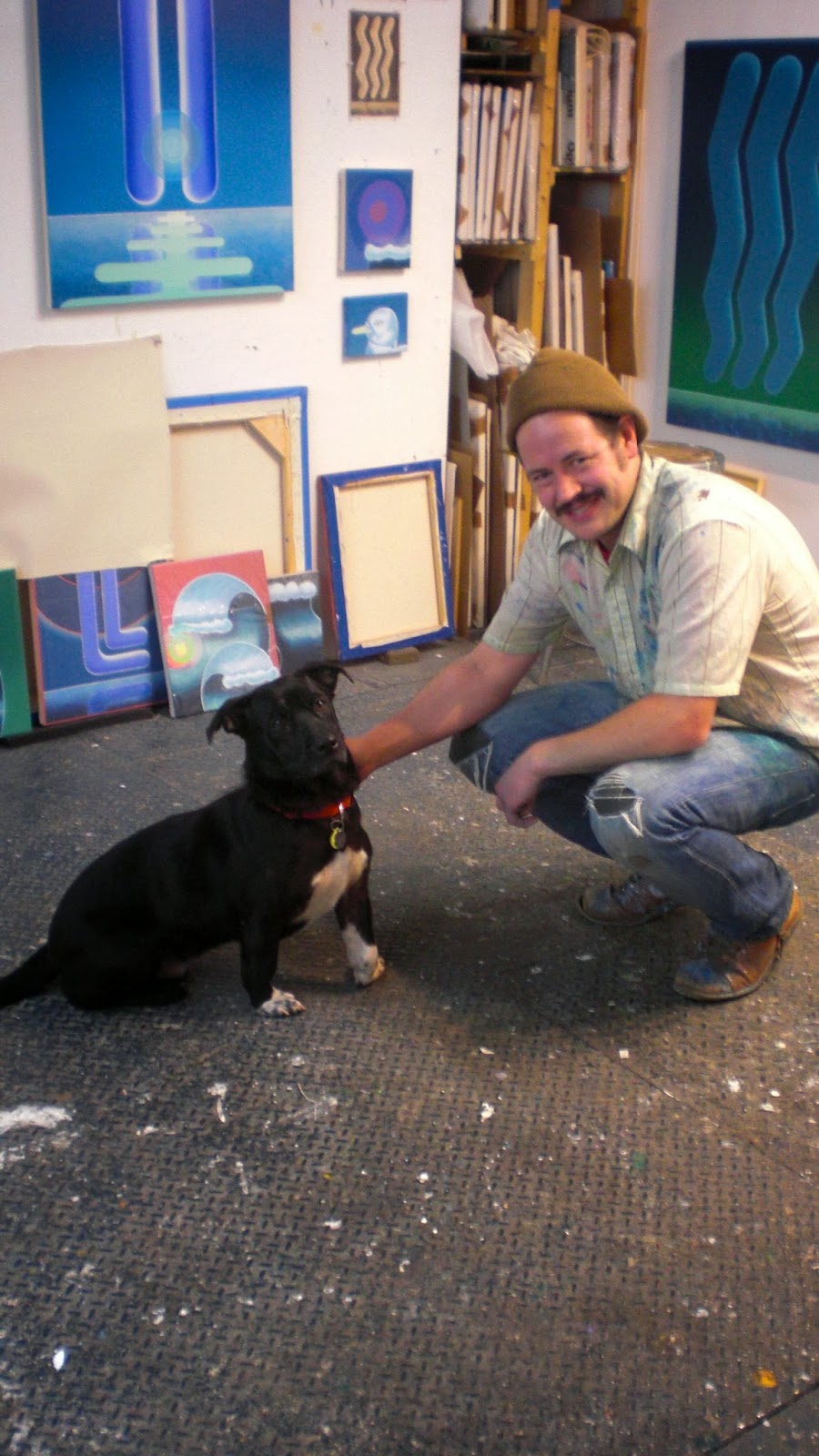 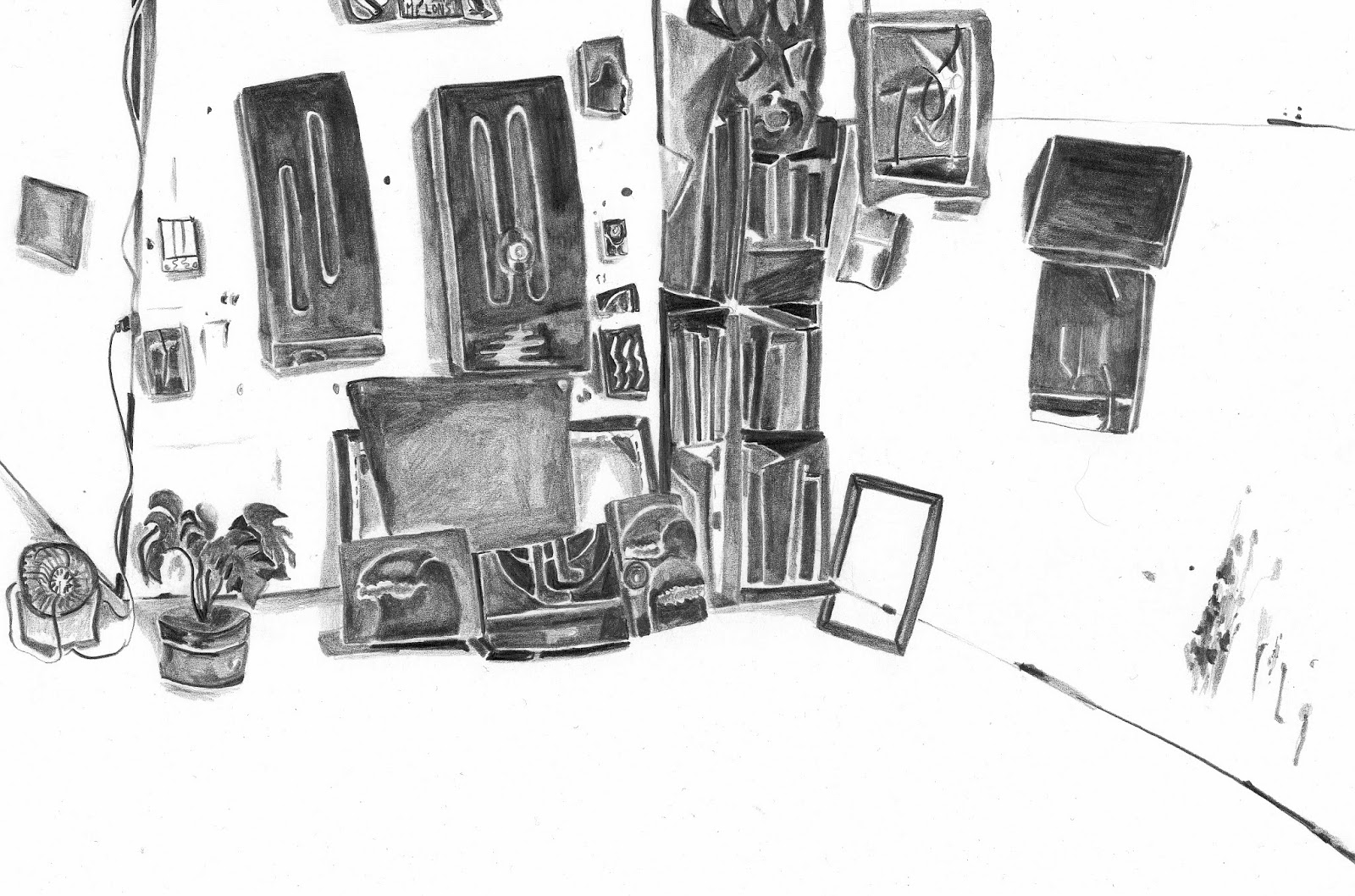 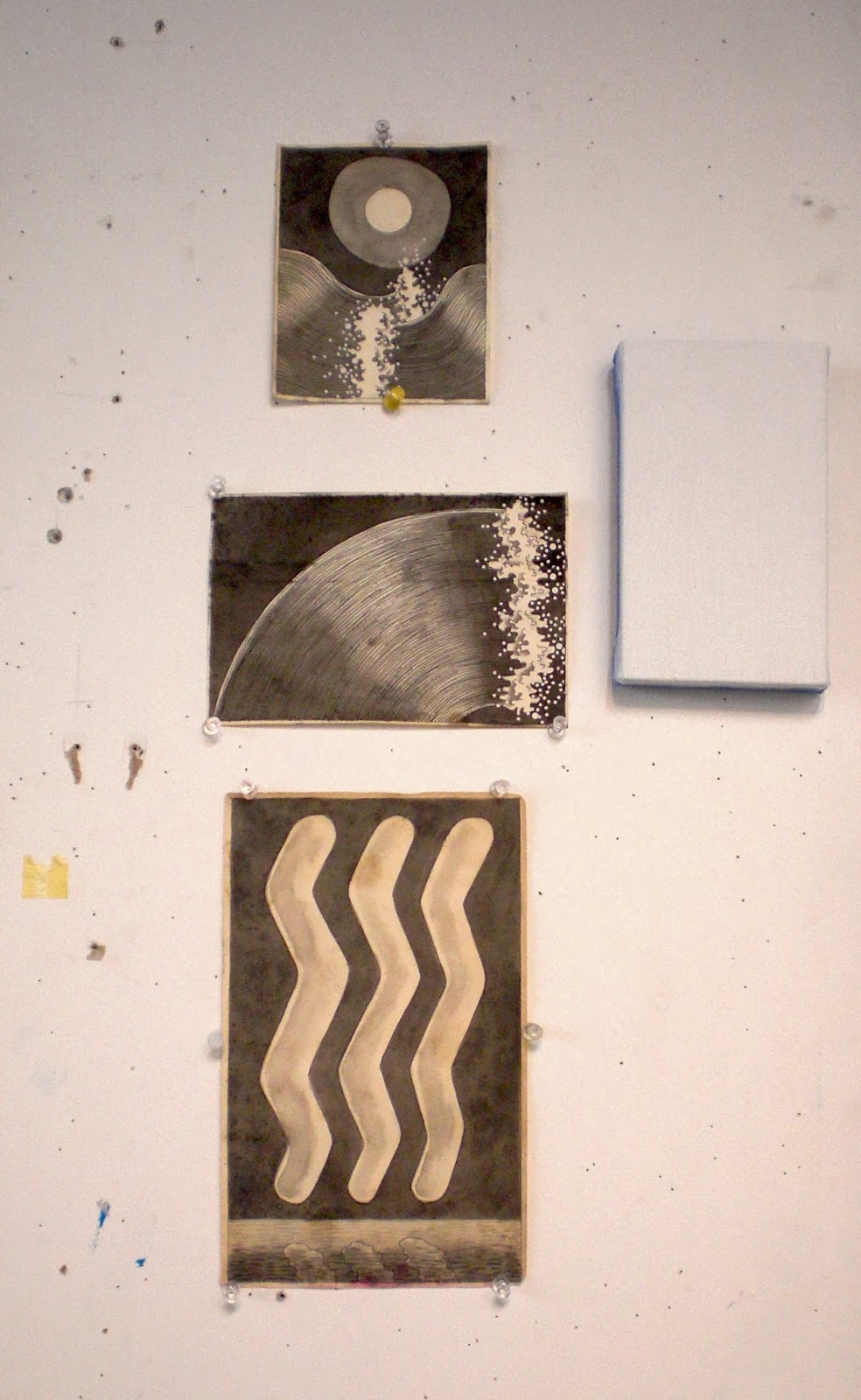 I watched Fisher build up his illusions by putting layer upon layer of acrylic over sections of his painting. The vibrant splatters on the wall around the canvas were a comfort and key to the hidden chaos within each painting. Pretty soon it was time to hit the icy streets again. So while we are all sitting in a piles of grey snow, it seems that Fisher will traveling to a wetter, but at least a little warmer, place. I am envious of that and slightly tempted to ask what Javier will be up to when they are away. Please check out more of Matthew Fisher's delectable work here http://www.matthewffisher.com/
Posted by Maria Calandra at Wednesday, February 19, 2014 No comments:

How many times have you been on your way to an opening and seen Loren Munk of the James Kalm Report buzz by you on his bicycle? Or even still, how many times have you seen him when you weren't on your way to an opening and wondered what you were missing? It's exciting to think that the next time I see Munk cycle by he might be on the way to his own solo exhibition You Are Here, opening this coming Thursday, Feb. 13th, at Freight and Volume Gallery in Chelsea. After seeing where so many artists' studios are located, both past and present, in Munk's densely informative paintings, it was with extreme curiosity that I saw the space where they were made. Cobble Hill was uncharted territory for me so far with Pencil in the Studio. Walking past the corner of Columbia and Degraw, I stopped for a minute to take in that radical view of Manhattan from Brooklyn and think about Munk's maps and how many artists there are that have made NYC their home. 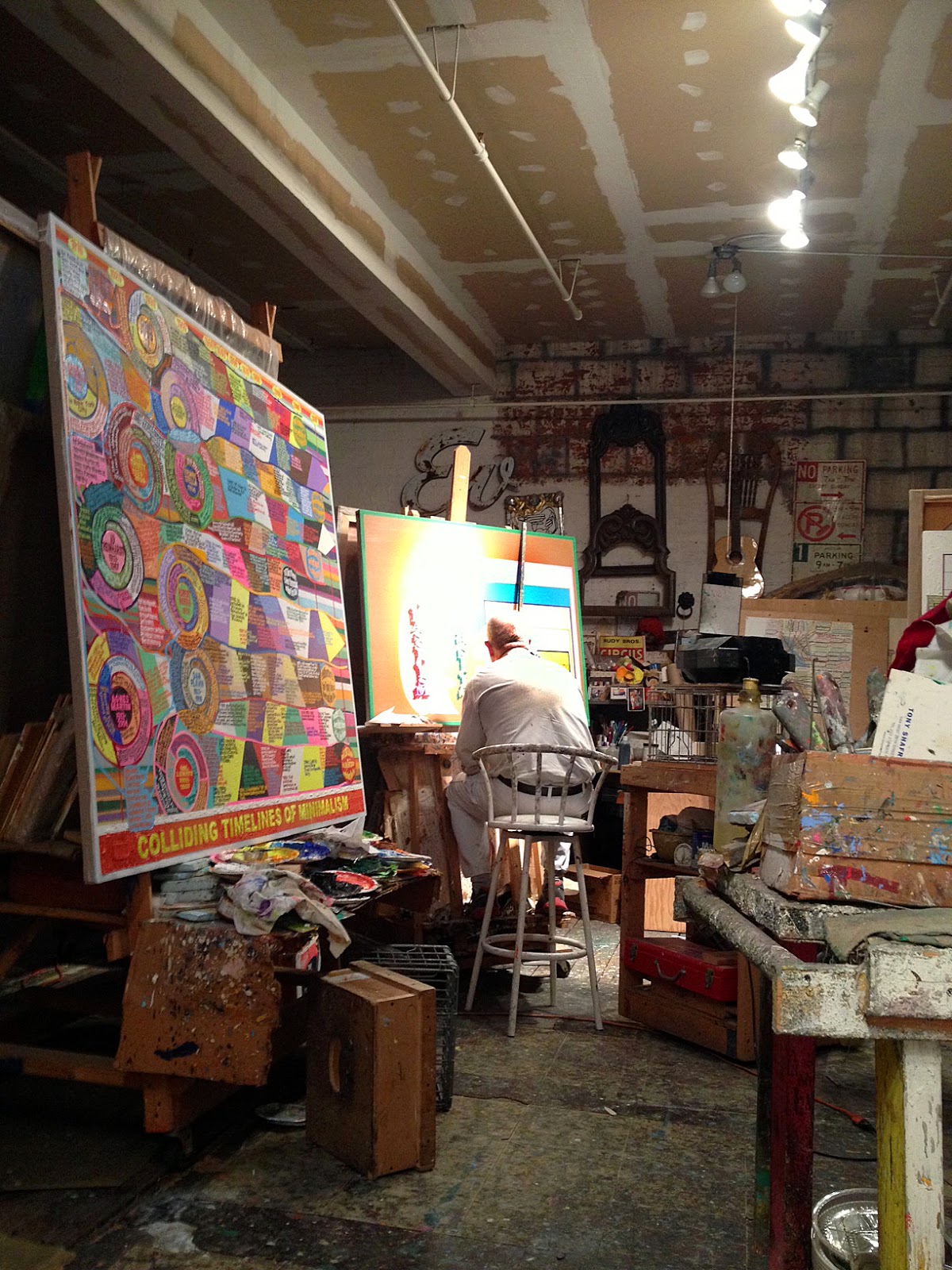 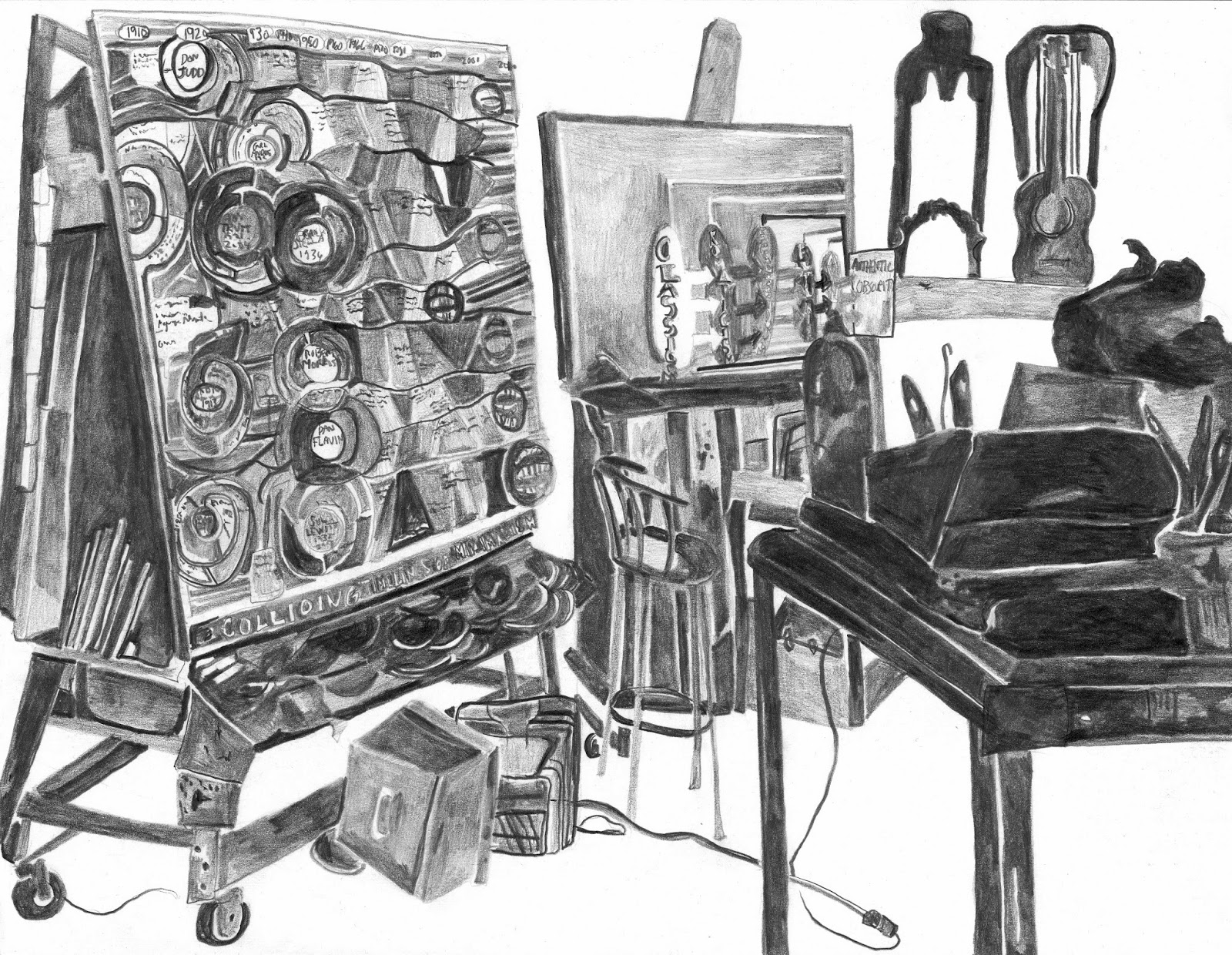 Collected at the door, Munk led me upstairs to the vast live/work space that he, his wife and family  have inhabited since 1981. While he put together one of the better cups of coffee I have had on my visits, we talked over his coming show, his studio and his busy life as not only a painter but also a popular You Tube hero for art. Feeling a bit overwhelmed deciding which point of view to draw one of his complicated beasts from, I was happy to delay the inevitable by taking some time to imagine what an undertaking it must be for him to plan one of these paintings out. It is really something that he uses such a vast array of color and variations of text, while the fact checking alone seems like a feat in and of itself. This isn't your run of the mill art history lesson either; there is also dry wit, satire and political commentary involved. In some paintings, he is able to give new light to old scenes where he breaks down genres in a kind of invented PowerPoint format. Without a speck of historical revisionism, Munk is contextualizing art making by describing it through art making — a pretty groovy kind of Meta. The paintings appeal to a viewer's intellectual and visual sensibilities. I can't get enough of his perfectly concocted color harmonies of richly textured layers of paint. Munk's artwork and videos of openings and art shows feel like an act of generosity to those that make art their life. 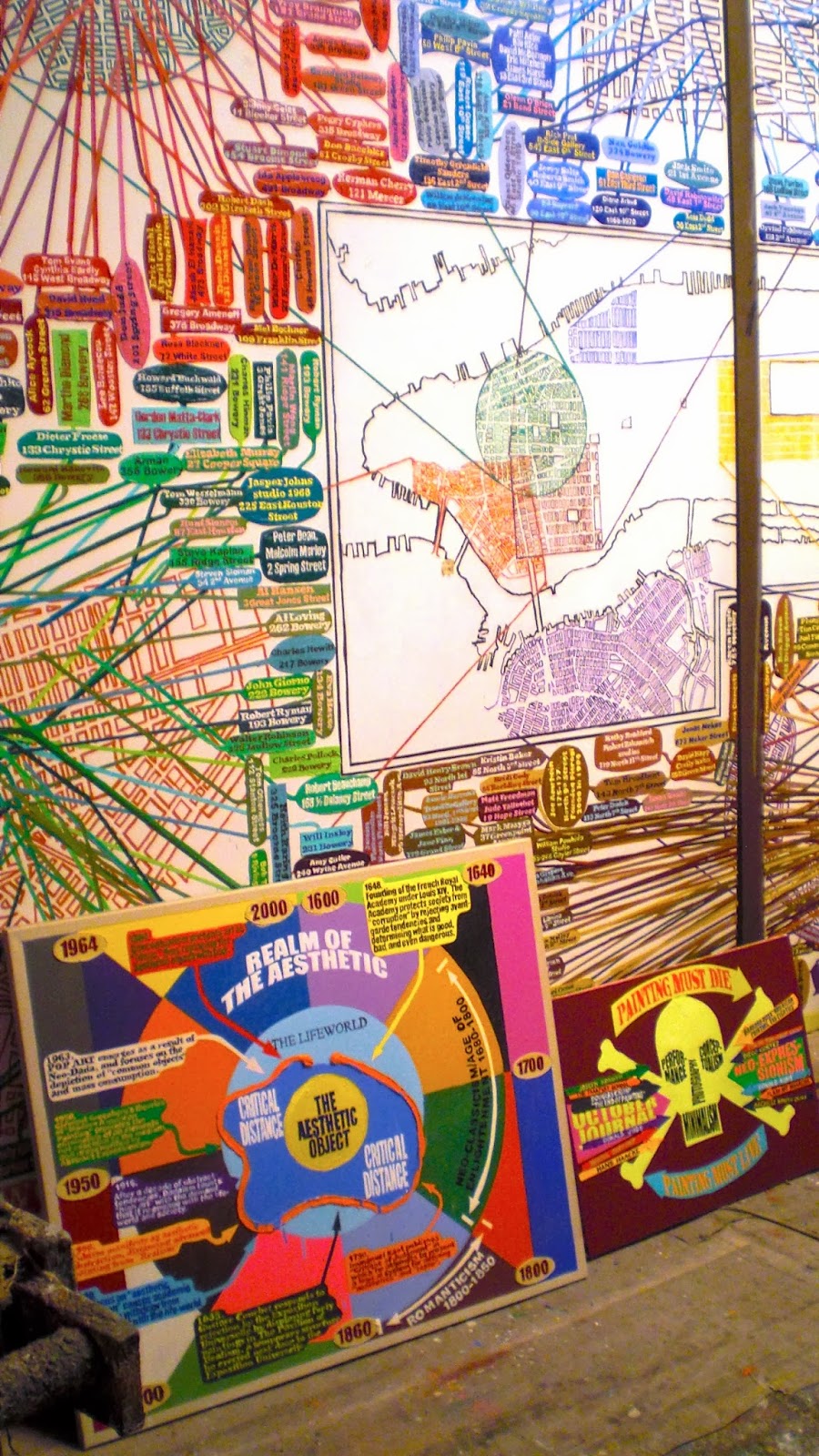 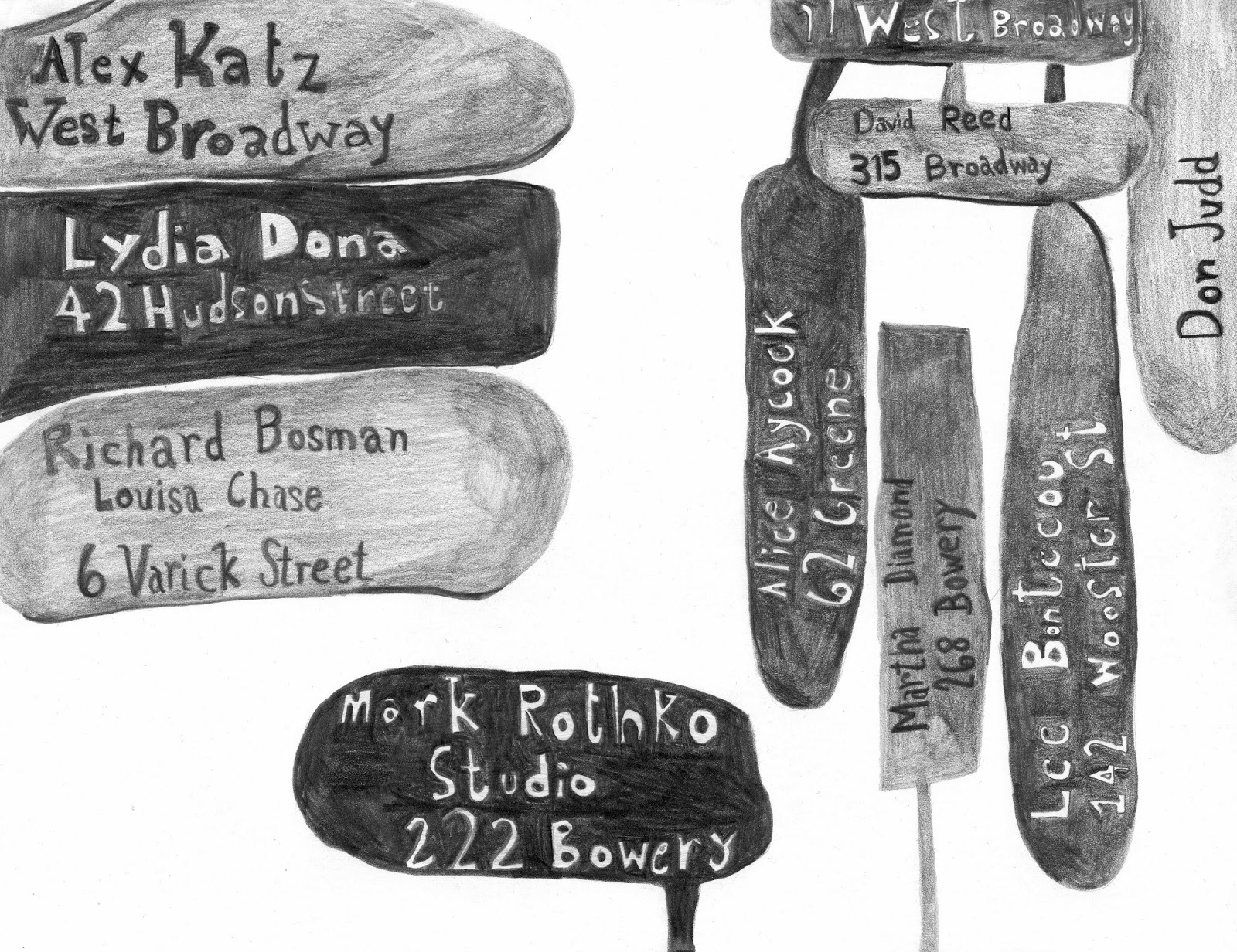 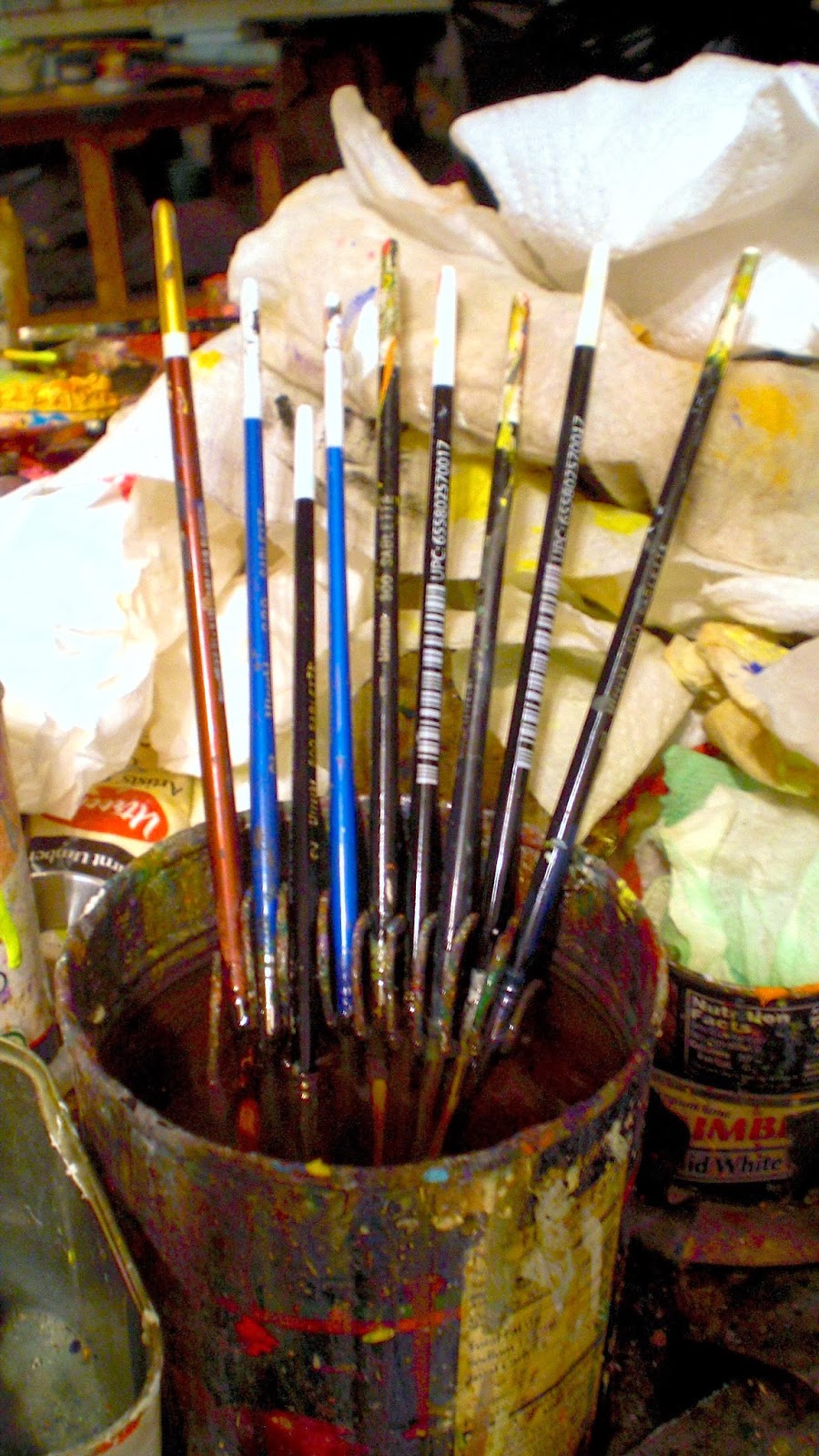 I did the best pencil description I could of a couple of Munk's paintings as he worked on a multi-layered section of canvas. Having fun listening to a popular music station while I was there, I realized after hearing Eminem's new song "The Monster" the fourth or fifth time that we were coming to the end of our studio session. With his two intensely driven projects, social media on one side and good old fashioned painting on the other, Munk has made himself a legend in these parts. It felt pretty cool to spend the afternoon making art with him. To see more go to http://www.lorenmunk.com/  and check out his show at Freight and Volume up from February 13 'til March 15.
Posted by Maria Calandra at Thursday, February 06, 2014 No comments: