Three mornings before Alexander Nolan made his way across the Atlantic for his first solo show with Galerie Bernard Ceysson in Luxembourg, I sat in his studio/living room and made a drawing of the fantastical figurative tales that cover the walls while he and his wife, Lauren Luloff, sweetly hushed their newborn Julian to sleep. With the golden spring light just beginning to cut through the end of winter, I was wholly captured by the serenity of the moment. Their new phase of life as inspiriting as the season's passing. Soon, Nolan will be moving studios, a pretty constant ritual for artists. Hopefully, this drawing on the occasion of his solo show will capture a memory for Julian he may not otherwise have. 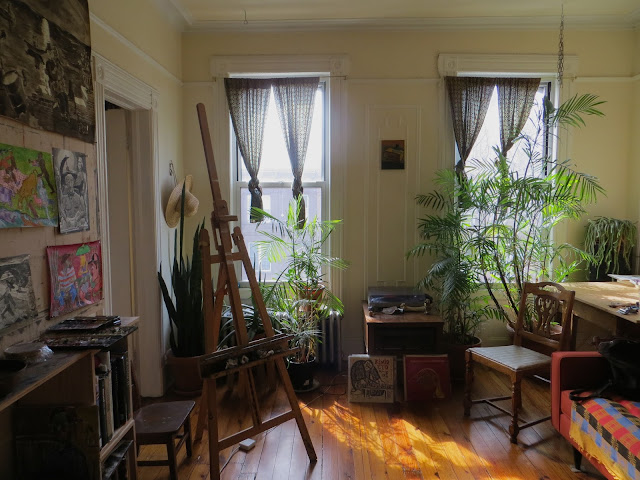 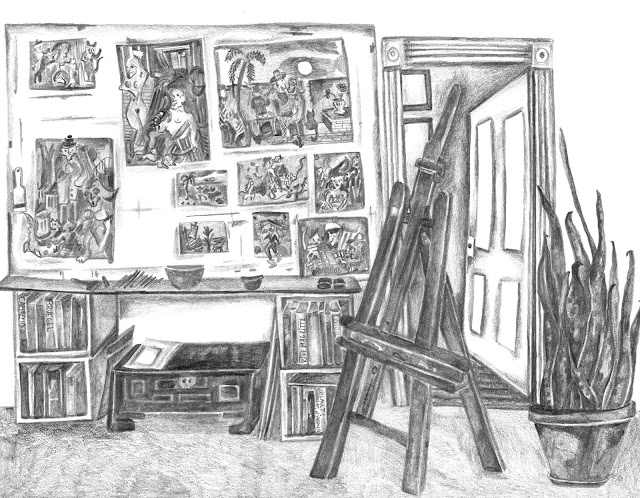 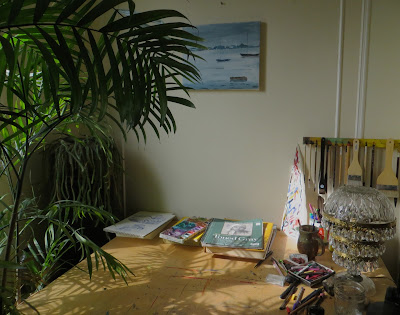 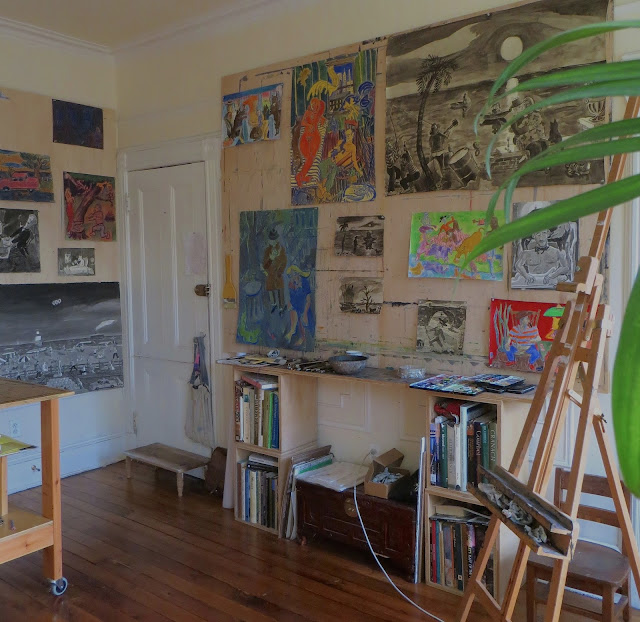 The characters in Nolan's fictions on paper have all the addictive qualities of a cliff-hanger, juicy romance, or historical anecdote, only with animals occasionally playing the lead roles. I was lost in his narrative while I drew a nursing woman surrounded by suave wolves brushing the woman's hair, sipping martinis and casually riding the train like nothing was out of the ordinary. Maybe a heist was in their future; I could imagine the next painting being of the wolves raising the baby in the woods. Another piece showed an alligator stealing the shoe of a damsel in distress as a passer-by walked matter of factly, an almost too familiar NYC fiction of the stranger who pretends to be oblivious to another in harms way. The loose brushwork of Nolan's imagery is direct and fresh. He is recording his imaginations without hesitation, like any good writer would, and his bold use of color supports the works' dreamlike qualities as it sets the mood, be it playful or suspect. Looking around the studio, I found stacks of art history books, from Bruegel to Magritte, and we talked about the hours Nolan has spent lost among paintings at the Met. The definitive flow of his figure-packed works on paper is evidence of this as he pulls from hundreds of years of art to tell his stories. 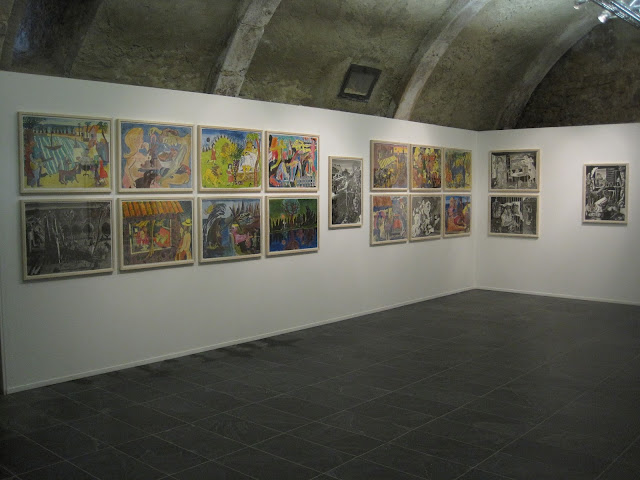 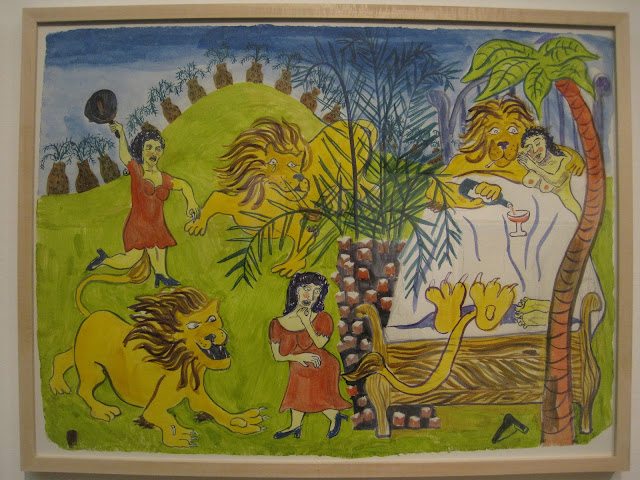 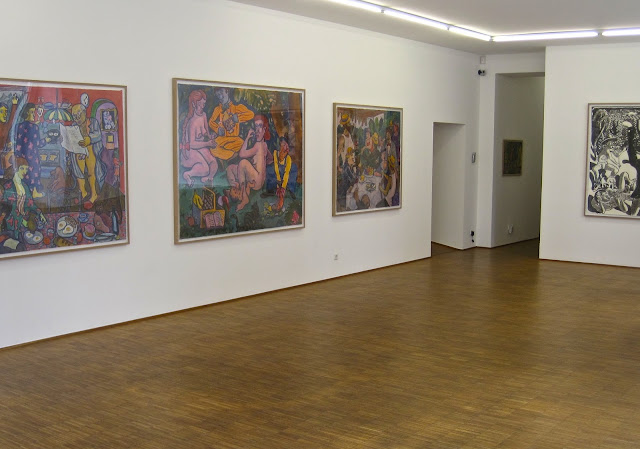 After drawing a cat holding a deck of cards sitting smuggly around a table, I sat around a different table with Nolan and his family eating omelettes and talking about his trip to Luxemburg. There was so much energy and happiness at this lunch hour, and soon after, Lauren was asleep with Julian as Alex and I finished up our art conversations in the living room. Nolan is in the inaugural show at Romeo Gallery opening the weekend of April 8th, and, if you find yourself in Luxemburg, his show at Galerie Bernard Ceysson is up until May 21st. To see more of his work go here http://alexandernolan.com/.

Posted by Maria Calandra at Wednesday, March 30, 2016 No comments:

We all forget to slow down: to take a longer walk, relish in what we eat, or look at art for more than one second at a time. I had the opportunity to spread a visit with Meg Lipke out over a couple of Saturdays last month while she got ready for her solo show at Freight + Volume's new space in the LES. We started our meetings with lunch at Northeast Kingdom, the beloved Bushwick restaurant that Meg and her husband Paris Smeraldo opened in the Fall of 2005, before the onslaught of others quickly followed in their tracks. After eating our juicy huevos rancheros and unstoppable fried chicken sandwiches, Lipke and I would go for a walk, pick up a coffee, and slowly make our way to her studio, letting our extensive conversations about her work and mine marinate. We were taking our time, and in that time I was able to draw the saturated overflow of rich colors and strong soft forms that expand beyond the canvas and imagination in Lipke's studio. 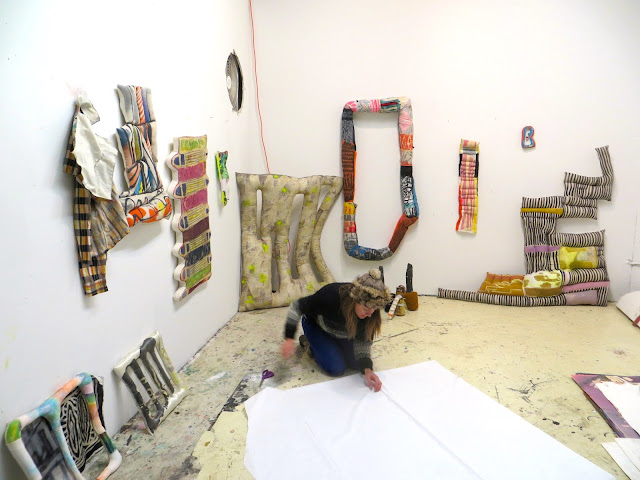 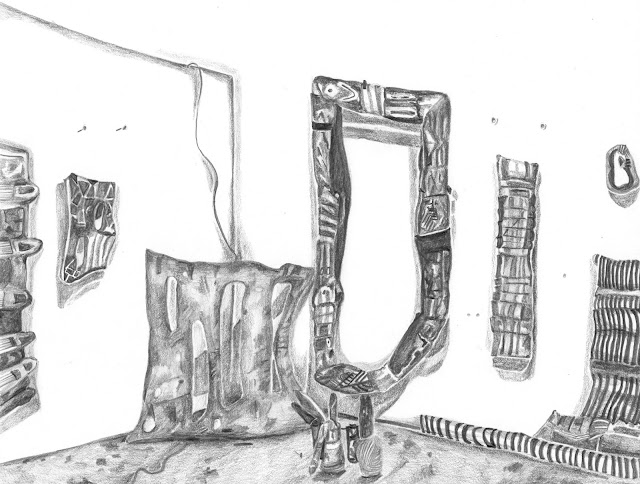 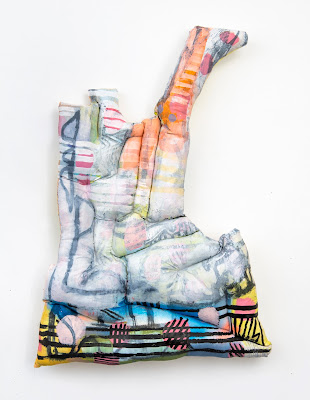 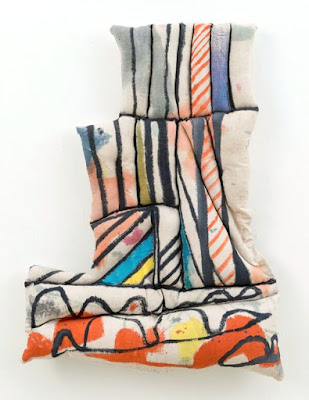 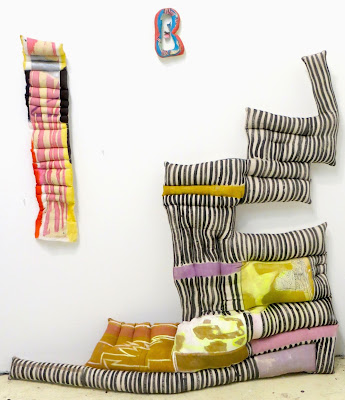 Growing up, I spent many hours in a costume design studio. My father taught in the theater department of a University, and it was my preferred place to be plopped when I was with him on my days off. I watched how the magical recipe of bright fabrics, tight stitches, and stuffing made things come to life. This same recipe is igniting Lipke's work; personalities grow out of the slightest slump of her forms. Skeletal-like structures, painted with the high contrast colors of vintage circus costumes, sway on the wall next to cushioned planks adorned with zigzag patterns and sewn into unlikely compositions. A large architectural configuration comfortably leans back, purposefully faded in color, but not in character. Lipke's paintings, on both stretched and sewn-together canvas, are wonderfully animated, and read like a 21st century re-imaging of the space between abstract expressionism and pop art. 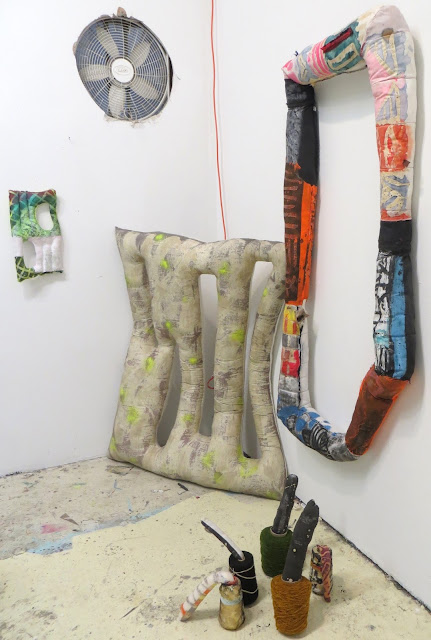 Northeast Kingdom still holds the reigns for the best place to decelerate and eat delicious locally sourced food. Lipke also lives near Hudson, spending a large portion of her time in her studio there and with her three children and Husband. She is not only growing great art, but also a family and food for their restaurant, truly inspirational. I urge you to go see her show opening this Sunday March 5th at Freight and Volume. And to see more of her work go here http://meglipke.com/.
Posted by Maria Calandra at Friday, March 04, 2016 No comments: