Just before the cold swept across NY (in more ways than one), I visited sculptor Fabienne Lasserre's studio in Crown Heights. The air was still gentle for fall. The sun was shining sharply behind me, illuminating the white outline of a partially transparent orb that vibrated in the light. I sat snugly with the blanket Fabienne stretched across my lap and the freshly frothed coffee she had put by my side. Her two year old daughter, Lou, darted around the yard picking the last remnants of summer's tomato plants. Before starting we rearranged some of the sculptures to set the stage for the drawing. The garage door acted like a proscenium while Fabienne's animated, kaleidoscopic, and oversized ensemble came to life in front of me. 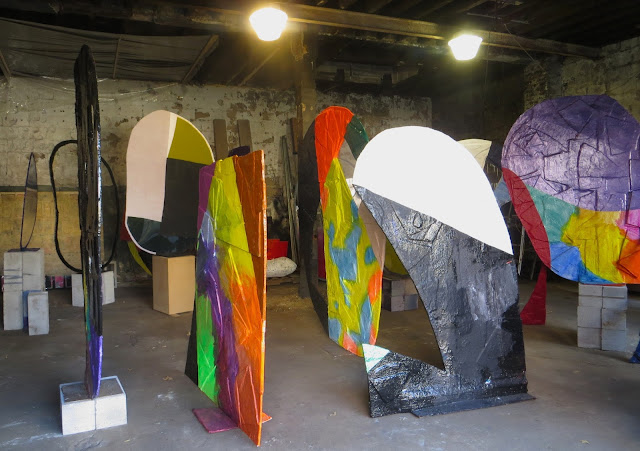 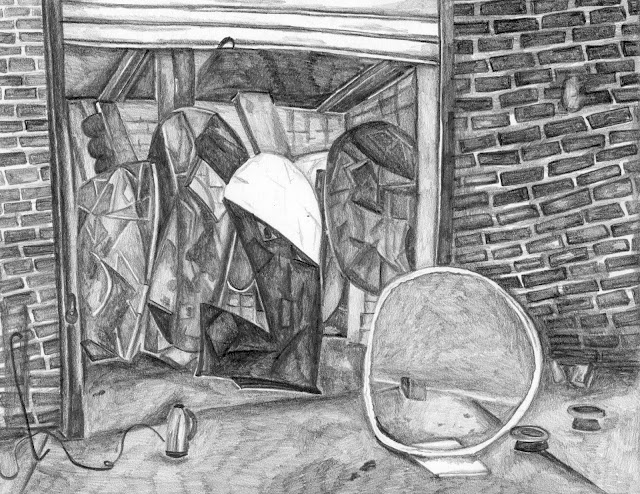 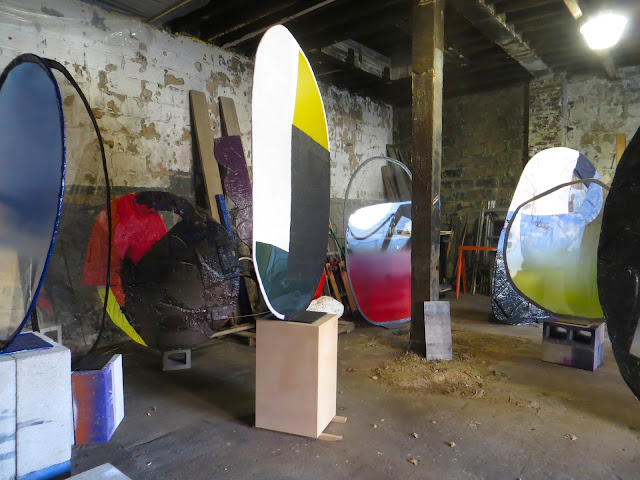 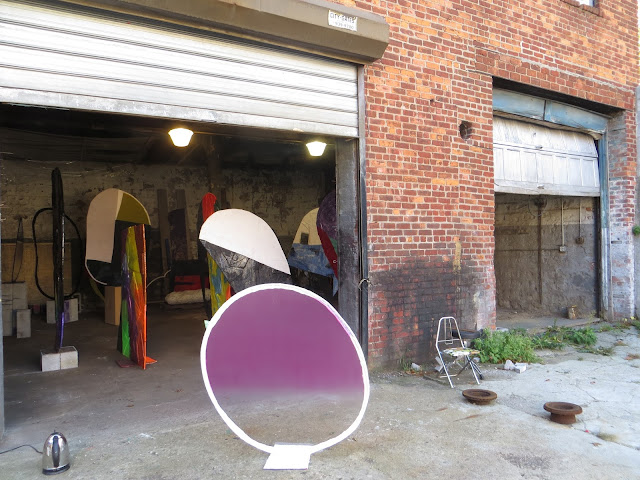 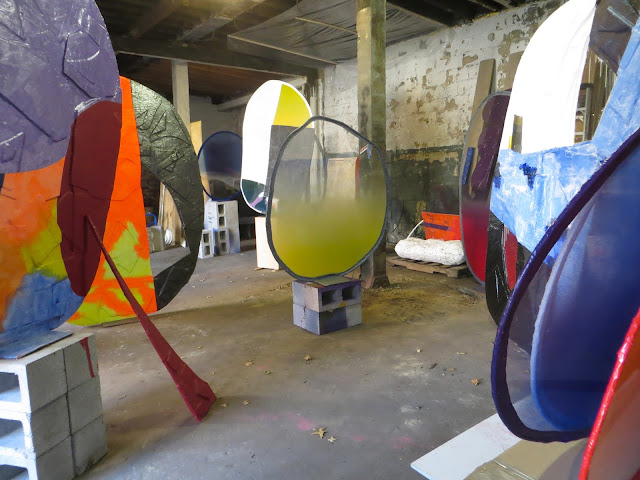 Fabienne takes abstraction to new levels by towering it magnificently over her viewers. As I walked through the sculptures that overflowed Fabienne's studio I could feel them gently guiding me through the space like the exaggerated hallways of a Fun House. I lavished in experiencing their expressive surfaces and wide cut out forms. They are wondrously animated in the spirit of Alexander Calder mobiles or Matisse's gouaches découpés. And then she takes her collages one step further by intuitively painting on either side of them. From neon oranges to glossy blacks to mute pinks, her palettes can go from monochromatic to vibrantly polychromatic. While I was there she was in the final stages of getting ready for her two person show with Annette Wehrhahn at Safe Gallery, which is up now until December 18th. Seeing the work in the context of the gallery a few weeks later only accentuated how much the sculptures play off of one another — cropping and framing each other to make entirely new compositions and conversations. They are truly all encompassing of both body and mind. 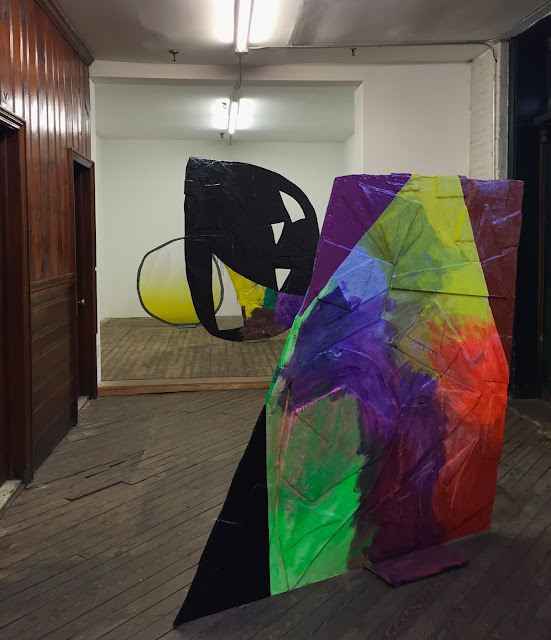 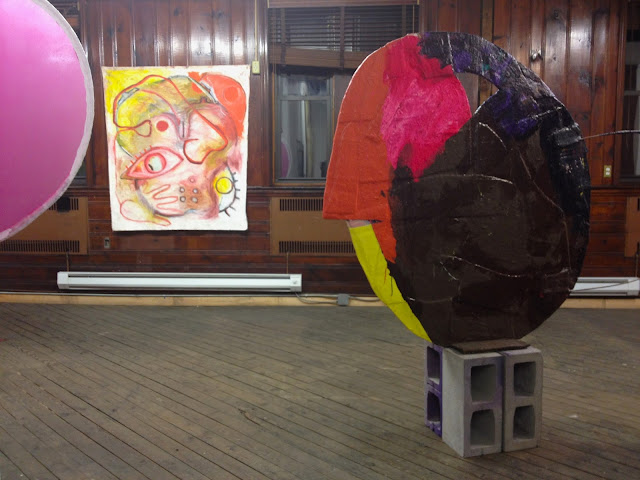 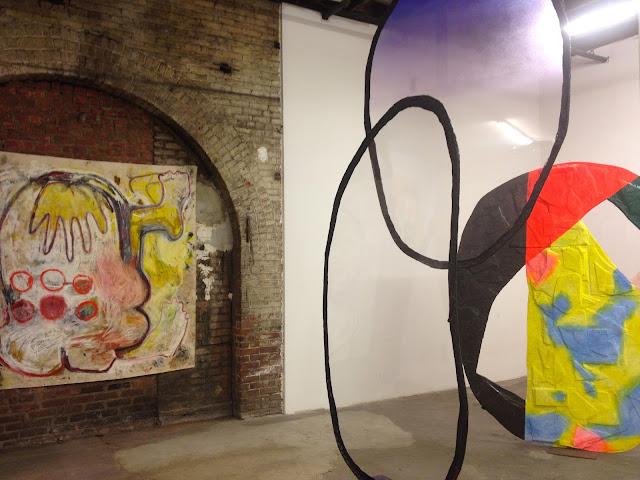 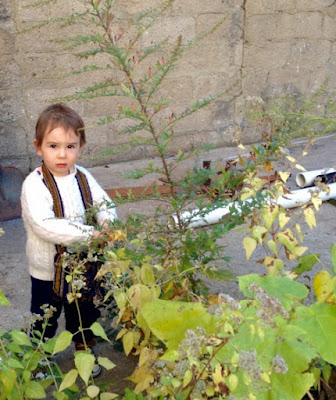 We spoke about how much her work grew in size once Lou was born. My thought was maybe when your heart grows your art grows. Fabienne also just started working in Sharpe-Walentas Studio Program. The space she was given at Sharpe has a view of the bridge. A wonderful way to make sculptures, I can imagine, looking at the Manhattan Bridge while you do it. I urge you to go and see her show at Safe Gallery, and to see more of her work go here: http://fabiennelasserre.com/.
Posted by Maria Calandra at Sunday, November 27, 2016 No comments:

My visits are mostly one on one, but spending the day in Liz Markus' studio was more like attending a soiree. Long legged retro models strutted, colorful hallucinogenic aliens snarled, a hippy was playing Jesus (or vice versa) and ceramic cats bounced their moon shaped paws up and down. A real life feline even crashed the party at the end of our session, prancing through the studio from down the hall. She tagged her favorite paintings with her tail before rubbing up against the leopard cub sitting in the center of the space. And all the while, Liz kept a constant beat going over the stereo as we managed to get some work done. 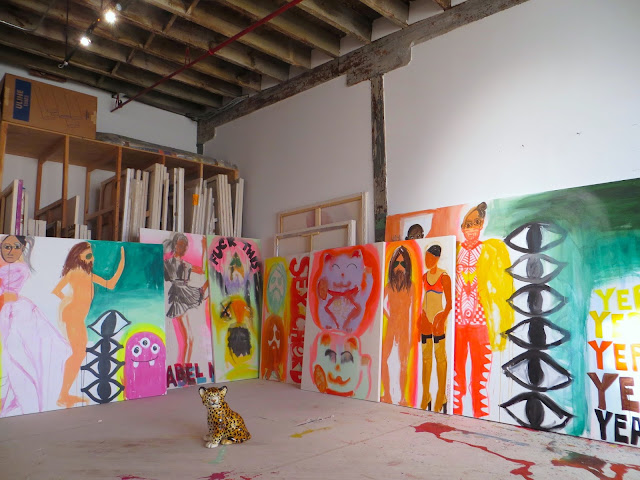 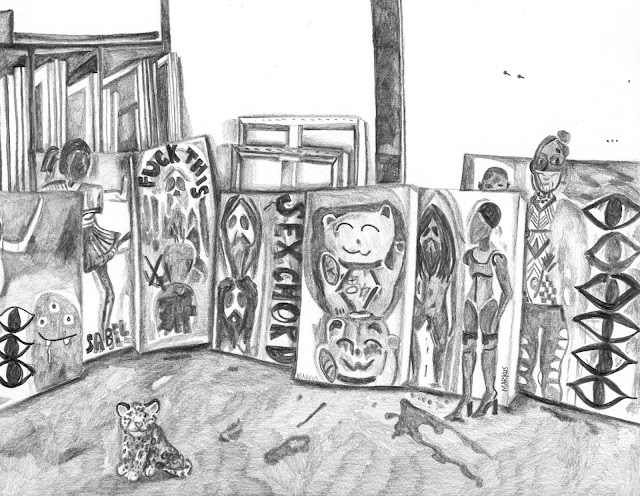 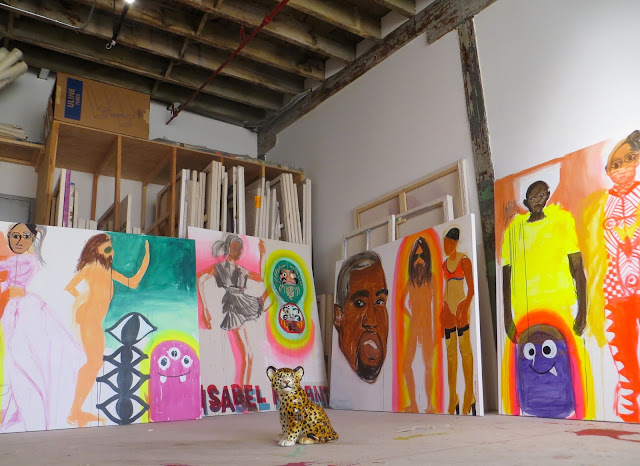 With a lot on her plate, Markus was gearing up for the group show "Domestic Seen" at the Nerman Museum in Kansas City when I visited her. A great energy ignites her space and you can experience it secondhand through her vivacious brush stokes and phosphorescent palettes. The pop culture references that raise the frequency of her high octane paintings are taken from collections of images and collages that fill up her studio walls and the cardboard boxes laying around the floor. Certain themes have come up in Liz's work and fearlessness has come out on her canvases. Recently, Markus successfully recovered from a rare form of ovarian cancer. Liz explained that she wanted to be able to speak about her experience of having cancer without overtly referencing it. She was drawn to images that represented good fortune, like the lucky cats you see hanging out in Chinatown's storefronts. So she painted them to connect the idea of luck and survival to how she felt fortunate to have had her cancer caught early. Sex cord stromal cell tumor is the medical terminology to describe her cancer. Abbreviated to sex cord it sounded to her more like the name of a band so she wrote it out across her painting in ownership of its power. Expressing positivity, frustration and strength as artists we are able to deal with some of life's greatest and least expected struggles. Abundance of creativity and spirit not only emanates from Markus' artwork, but also from Liz herself. 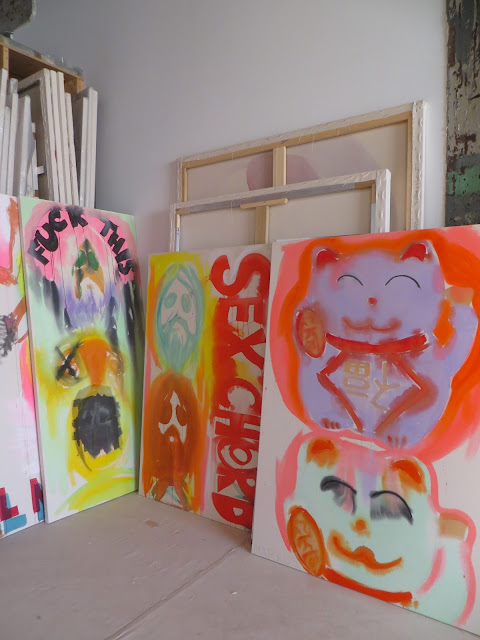 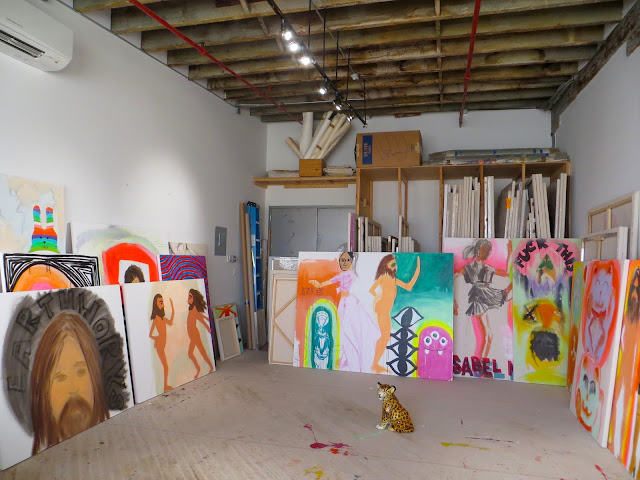 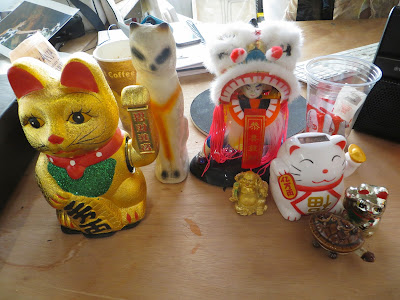 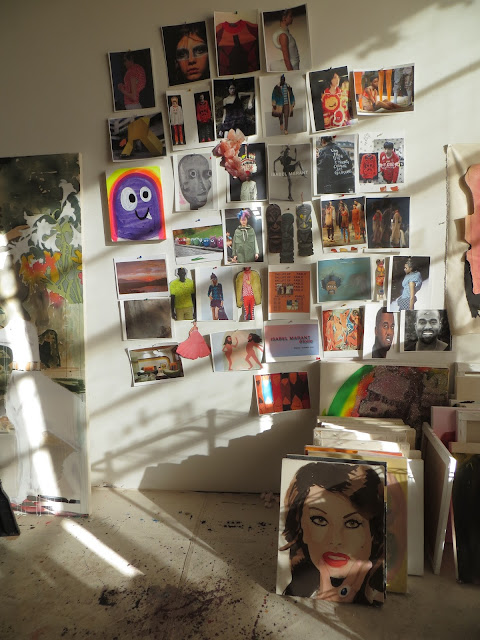 After things winded down we talked about books and the importance of taking care of yourself. We talked about the big skies of a desert and living in the moment. I left full of life. Markus is in the group show "Domestic Seen," curated by Bruce Hartman at the Nerman Museum in Kansas City, which runs from October 20 – March 26. And "A New Subjectivity", curated by Jason Stopa and featuring artists Katherine Berhardt, Kathy Bradford, Rose Wiley, and Jackie Gendel at the Pratt Gallery Manhattan from February 23 – April 12, 2017. She also has a show at the University of Arkansas in August of 2017. To see more of her work go here: http://www.lizmarkus.com/.
Posted by Maria Calandra at Wednesday, November 02, 2016 2 comments: