I first had the opportunity to visit the studio of Erik Parker several years ago. Not only was I struck by how very cool Parker and his paintings were, but most importantly, by his dynamic color schemes, his use of vociferous imagery, and his fearless dedication to the lengthy "start to finish" of an extremely complicated painting. Oh, and he had a sweet studio in Williamsburg with a skylight. Years later, it was a thrill for me to return and draw his space, still seized by his artistry. When I arrived, Parker's paintings were all lined up, ready to be shipped to LA for a solo show that opens this Fall at Honor Fraser. There was so much going on it was hard to figure out where to begin. Parker gave me a jovial smirk and wished me good luck. 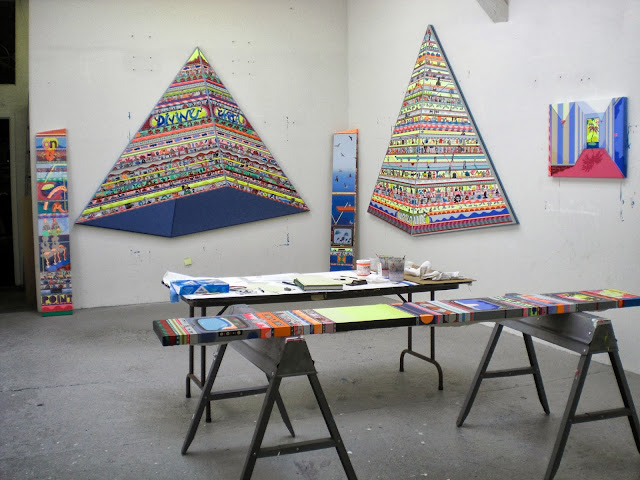 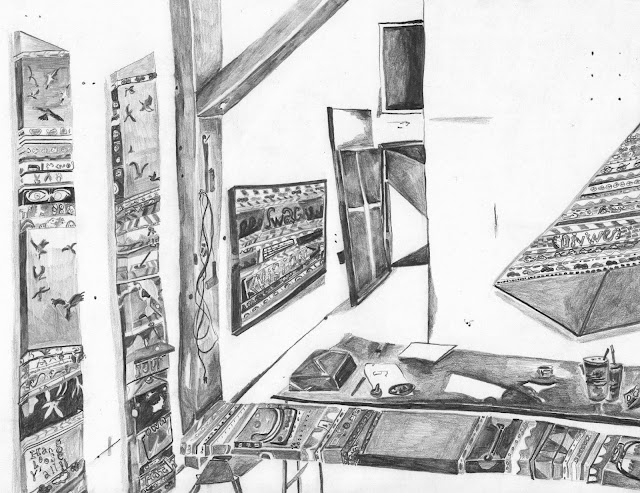 As I set up, and Parker and his assistant Michael Dotson got back to work, it was a trying task to figure out how to draw these paintings while still subscribing to their mantra of "detail and precision." Attacking them across, from top to bottom, seemed to be my best bet. I soon realized that some of Parker's new work actually reads from top to bottom much like a scroll or a tablet, with painted-out messages loaded with subtle jokes and witty revelations on the iconic imagery of our collective past. The long paintings that stood like an army upright against the wall brought to mind totem poles, telling stories of loudmouthed faces, tuned in television sets, and birds in seasonal flight. And the pyramid shaped paintings that are built from the thin lines of Parker's contemporary hieroglyphics gave me a pleasingly blurred sense of perspective as the canvases' subtle color shifts convinced me of a third dimension that was not there. At some point I reached the end of drawing one of the towering canvases and discovered text that spelled out YOUR OWN PATH. I took that thought home with me and used it as my own mantra throughout the week. 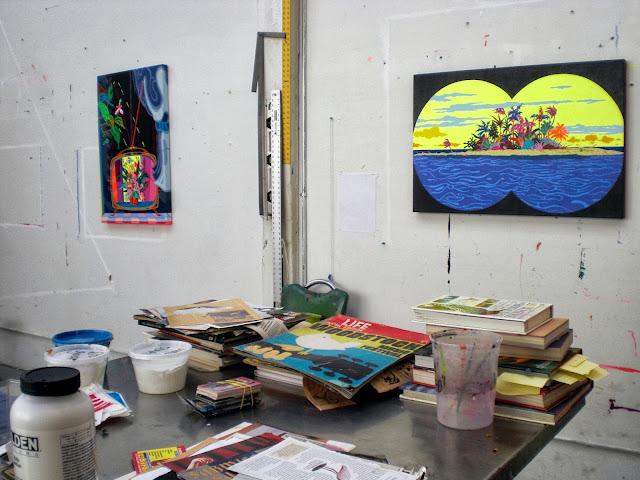 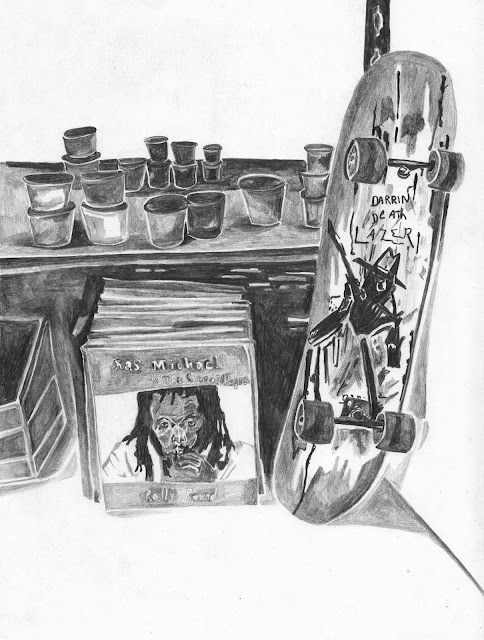 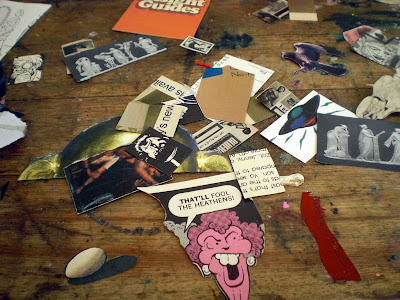 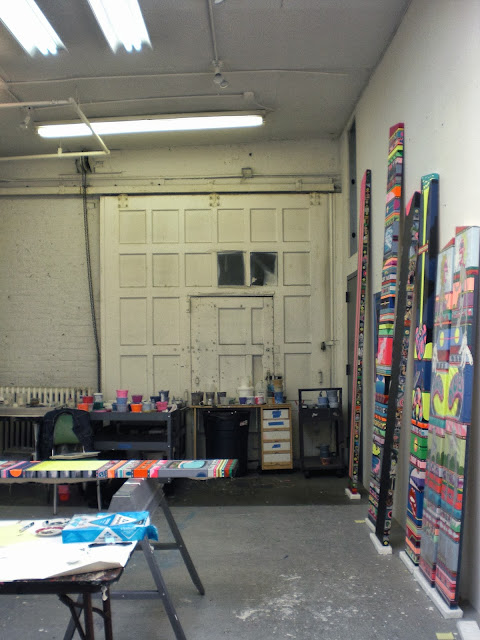 It was a two day session in the end, and the hard working Parker and his assistant seemed as satisfied with their pre-show sense of wrapping things up as I did with my meager drawing. Parker explained it had been a whirlwind of production since May to get these works ready for the Fall. With music playing that was as energetic as the work itself and those last few sips of ice coffee before the weather changed, I finished up and took a nice stroll back to my place. Parker was a great visit. He is currently in a really exciting looking show at Ballroom Marfa called "Comic Future" that is up until January if you happen to be in Marfa, Texas. And to see more of his awesome works go here http://www.paulkasmingallery.com/artists/erik-parker 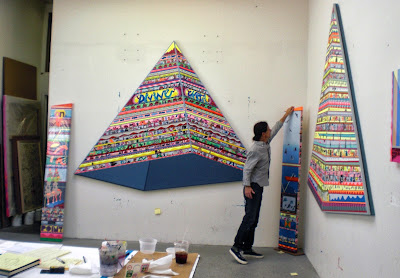 Posted by Maria Calandra at Sunday, September 29, 2013 No comments:

Navigating a foreign city, almost smugly, as though I had done it all before, left me humbled in the realization that an iPhone is nowhere near as handy as the good old fashion map I used to tote around with me in Europe. With that 20 year old kind of rush you only get from bouncing from train to train without exactly knowing where you're going, I was off to find David Malek's studio in Paris. He has spent a year plus in France and has been working in a vast multi-leveled shared space that is subsidized by the government. Aside from the gaggle of dudes that stood outside listening to beats and smoking joints, it was a serene working environment complete with large frontal windows for capturing light and a lush upstairs outdoor garden for reading and taking breaks. The studio door was marked with a bold number 1, ensuring me that I had arrived after much debate on whether to take a final left or a right out of the subway. So nice that after that numbing flight across the Atlantic I could be greeted by a familiar face and easily strike up a conversation with the artist about their work and studio, realizing not much changes from place to place. We eagerly began to talk about Malek's recent body of work and the shows he has had since living abroad, the gallery milieu of Paris, and a painter's perspective on the art scene. 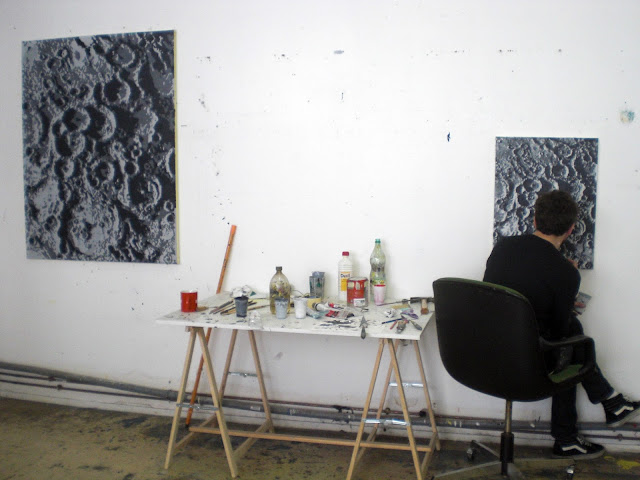 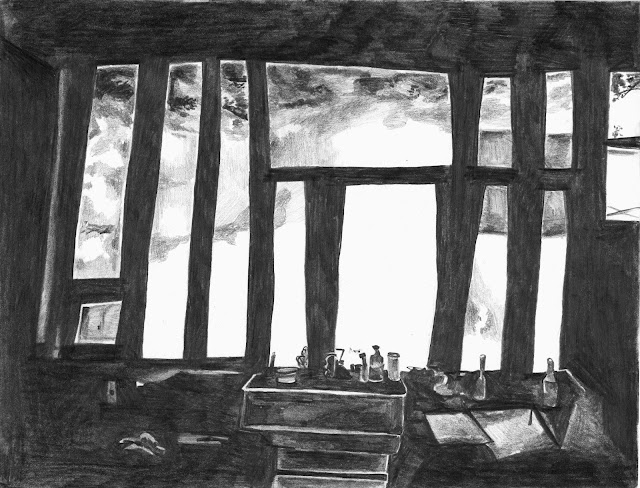 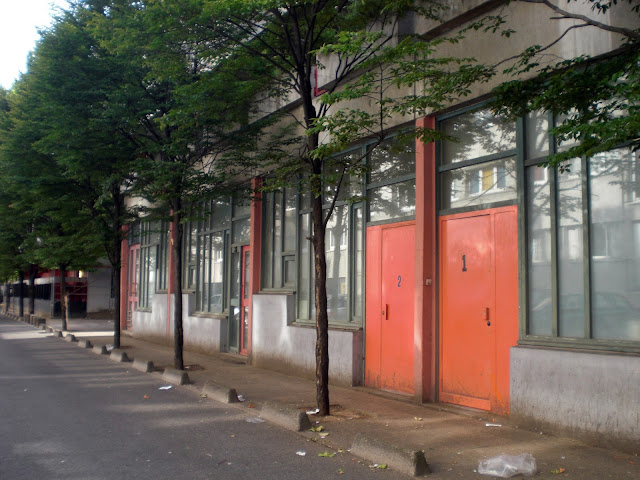 There are few things I find as interesting in a painter's practice then a seemingly sudden break from what you expect them to be working on. Although sudden was far from the truth in this case. I learned that Malek actually often works on different series in his studio. Nevertheless, I find it freeing that what is to be expected can be challenged. Solving the mystery of how the paintings aren't really so different from what you had anticipated gives me a kind of thrill, a simple game of deduction that only adds to the pleasure of viewing the artwork, a need to tuck into my thoughts on the use of paint as a both a medium and an intellectual translator. The work of Malek's that I am most familiar with are his slick but tactile abstractions that occupy thoughts on vibrations and contrasting color gradations. In these paintings, each section or band of color is piled with a maniacal amount of layering, allowing the surface to strangely hover above the canvas. After spending some time looking at Malek's new paintings, while watching him painstakingly work on them, as I tried my best attempt at making my drawing come close to looking the same, I realized he is up to the same old stunning tricks. Enamel paint, his obsessive tendencies, and a time consuming amount of brushwork result in a canvas that really gives the viewer the optical go around, posing questions that lead to more than one conclusion on the process of the work. When I first arrived, and a good hour into being in Malek's studio, I thought the smaller painting was a photographed image that he was using to make the larger painting from, having not gone up close to it yet. I had been had. It was just a smaller painting. To add to my confusion and miscalculations, Malek isn't even using a photograph of the moon at all to work from, but instead painting from photographs of plaster models of the moon's surface that where made by James Nasmyth in the mid 19th century. Nasmyth made these models from observations of the moon before the moon's surface could be photographed. It seems that both gentlemen's work deals with a strange simulacrum, Malek's of painting, and Nasmyth's of outer space. 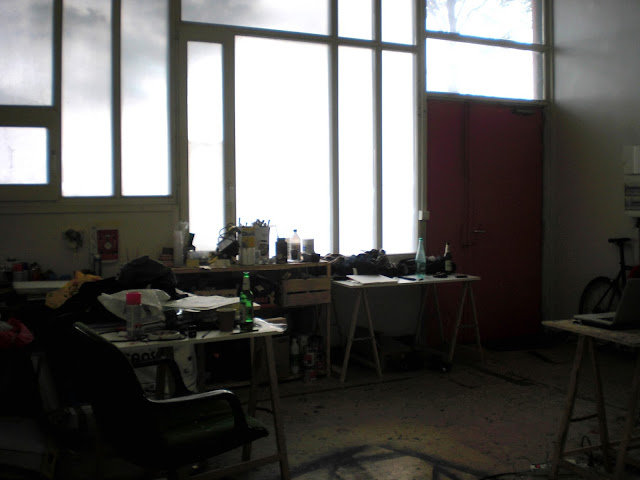 Malek had a exhibition this past spring at Gallery Vedovi in Brussels. Again with a kind of dedication and stubbornness for perfection it seems that Malek is allowing his intellect and impulse wander from body of work to body of work, but not too far. He is also in a group exhibition that opened this week in Paris at his gallery Triple V and is up until November 9th. I stopped by Triple V while visiting. It was very impressive and had two spaces steps away from one another on rue Louise Weiss, a street with several galleries on it. 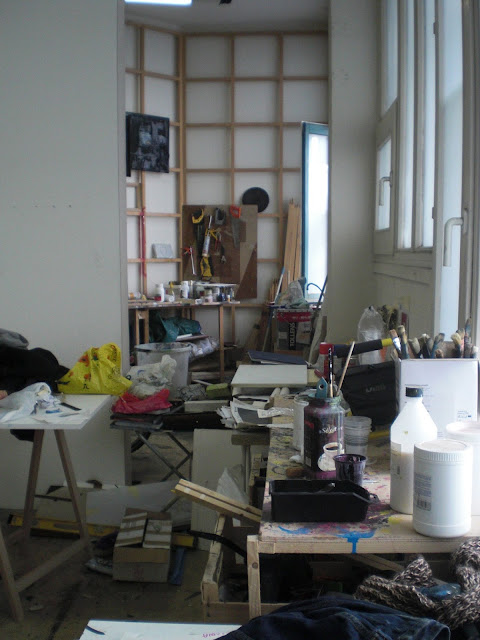 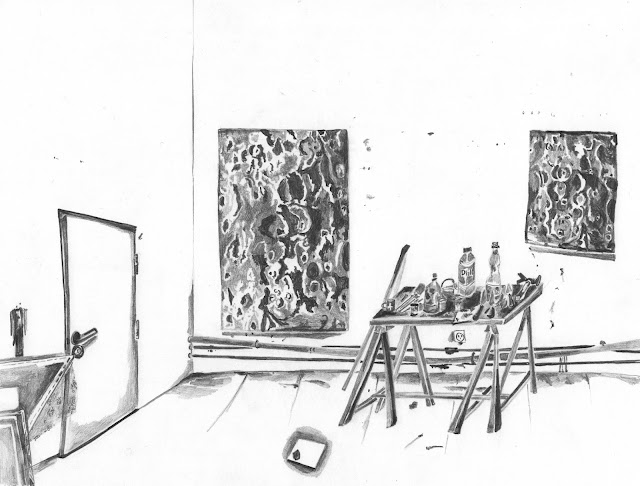 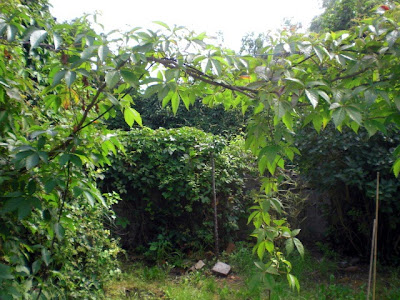 We had this drawing session on the first day of my time spent in Paris. It flavored the whole trip. It is one thing to visit old friends at the Musee D'orsay or the Louvre, but quite another to a see a Parisian, or at least an expat, in action. We took a break mid-day to sit in the garden, hurrying around the corner to pick up a bite at the local grocery store: a baguette, a bit of cheese, some jambon, and of course a cold bière. Later, after our studio day was complete, he showed me around the The Canal Saint-Martin neighborhood with his wife Jill Tonic and their perfectly bouncy baby girl. Then the group of us had lovely and hilarious dinner to finish the evening. I'll save that story for another time. Malek's work and personality are exceptionnel. Take a look at more of his paintings here http://triple-v.fr/?page=fiche_artiste&artist=31 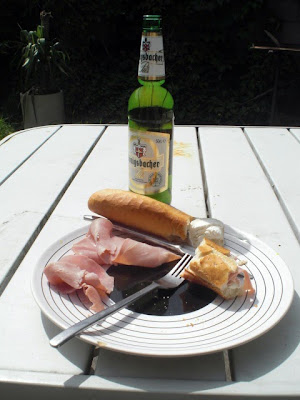