Before heading to Adrianne Rubenstein's current solo show at White Columns I went to see the Philip Guston show at Hauser and Wirth. The idea was to pair paintings that were made over fifty years ago with some of the most intriguing paintings of 2016, fresh out of Rubenstein's studio. Both painters are natives of Montreal who eventually landed in New York, but this isn't the only parallel I drew. There is a fearless oomph behind their mark-making, and out of that oomph (after a lengthy stare) bizarre and amorphous forms begin to appear. The grappling that went on between figuration and abstraction in the 1960's, in Guston's studio, is not only relevant today, but still happening right here in a studio in Brooklyn. 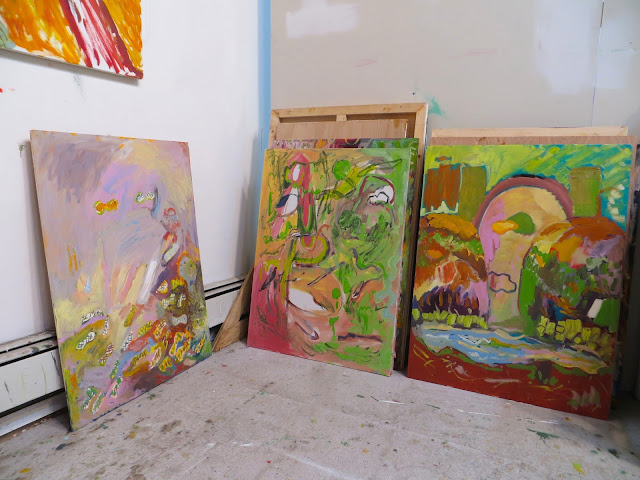 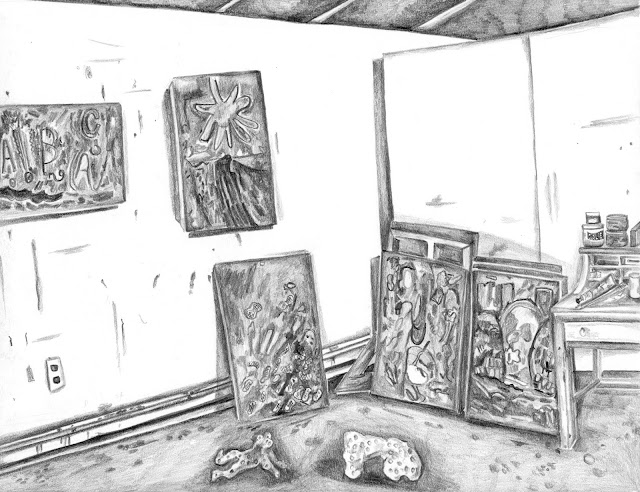 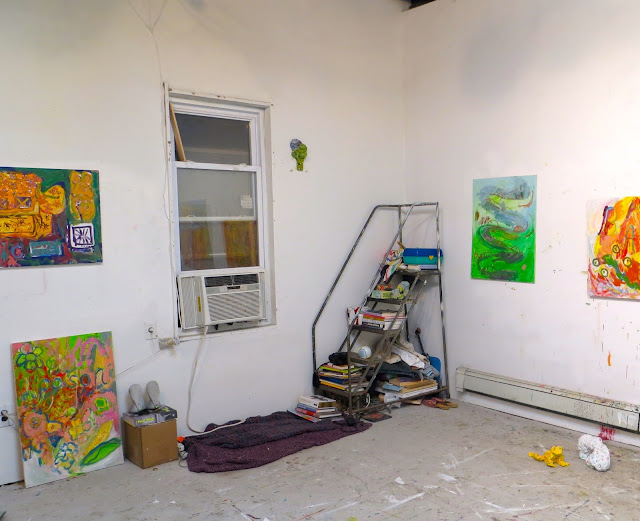 Adrianne had just landed back in the US from Zurich when I continued my exploration of her work while drawing her studio. Exposing her viewers to a world reinvented with each new panel, I landed on all kinds of trippy things as I took them in: house-sized vegetables, flying peanuts, and texts that slither out of your sight like serpents and make up puzzling Haiku. Her gestures go from fine and succinct to large and sweeping and use light pinks and cherry reds to offset grassy greens and minty blues — reminding me of the Fauves at their best and brightest. She mentioned in our conversation that The Group of Seven had an early influence on her while studying in Canada. I can see that her paintings are making friends with the late landscapes and theoretical sensibilities of Emily Carr. Carr said "Art is art, nature is nature, you cannot improve upon it... Pictures should be inspired by nature, but made in the soul of the artist; it is the soul of the individual that counts." Rubenstein's paintings seem to be channeled directly from her soul and she takes up every bit of space on her panels to share with us that glowing light she has within. 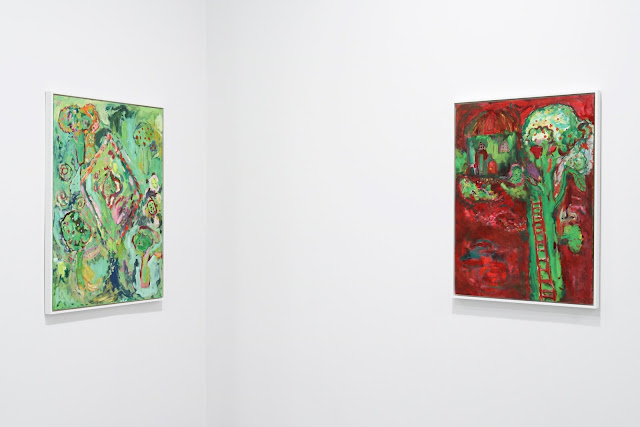 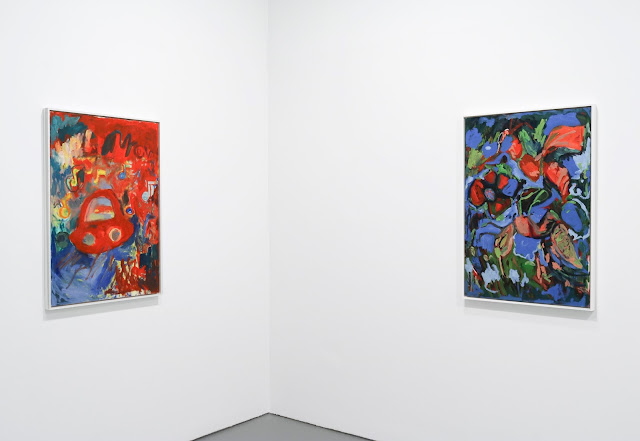 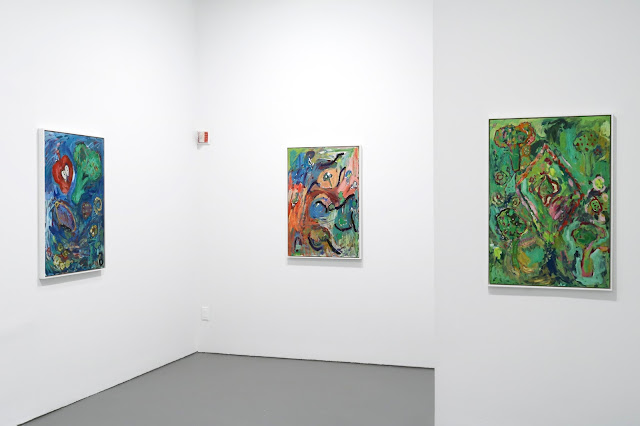 Image Courtesy Of White Columns, NY
I had The Beach Boys song "Vega-Tables" in my head for most of the visit. It was a slow, soothing, and quiet time together. She remarked on how nice it was to be back in town and in the studio. I remarked on how nice it was to be drawing her paintings. Please go see her show at White Columns before it comes down on the July 15th. Adrianne is also in a four person show at Harper's Books (East Hampton) with Kathy Bradford, Al Freeman and Sarah Braman, which she organized, opening August 13. She has a small solo show at The Pit II (Los Angeles) opening Sept 18, and has curated a show titled 'Fort Greene' for Venus Los Angeles which opens Sept 17. To see more of her work go here http://www.adriannerubenstein.ca.
Posted by Maria Calandra at Friday, June 24, 2016 1 comment:

Unable to access the studio of every artist I admire I will often go to museums to draw paintings. Following the rich contours of a heavy line with my hand is choice — Miro and Twombly being some of my more enlightening drawing experiences. Now I add to that list (and without a trip to the museum) my recent visit with Eddie Martinez. Paintings of all sizes were lined up, one after another, on his walls. Some were even strewn across the floor, momentarily lying down in mid-application. Admittedly, my allegiance lies with work that is anchored in line. You can only imagine how thrilling it was to have so much of it in front of me. 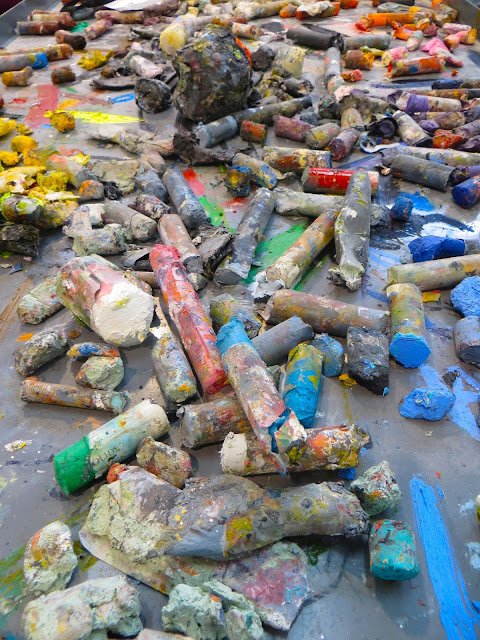 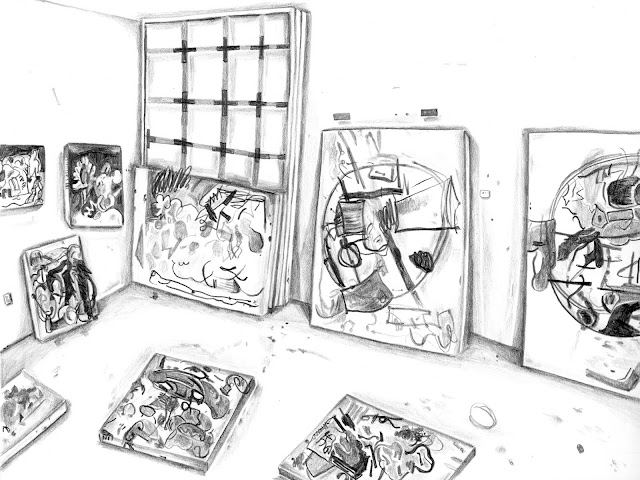 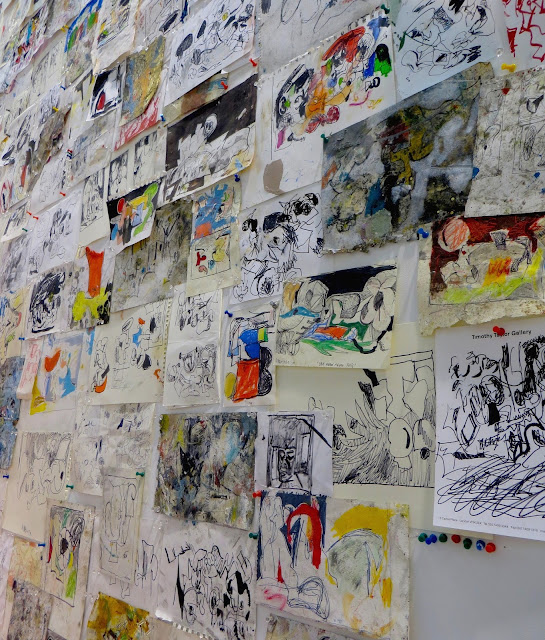 Dynamic black marks made without pause silhouette collections of chunky and vivid cut up shapes. Browns, blues, and yellows contrast varying degrees of whites and the darkest of blacks. But it is the reds that always lead me back, sitting on top of the canvas commanding my eyes. Sometimes they are still-lifes of unrecognizable objects, sometimes otherworldly rock filled landscapes or jumbled up figures with outstretched legs. I think of the primary colors and vigorous lines of Abstract Expressionist Corinne Michelle West or the direct rawness and figuration of the CoBrA movement's Asger Jorn. Jorn's good friend, Guy Debord, once said "Art need no longer be an account of past sensations. It can become the direct organization of more highly evolved sensations." This quote encapsulates the essence of Martinez's work. His art evokes an immediate sensation, the maker and viewer simultaneously experiencing a moment of creation. 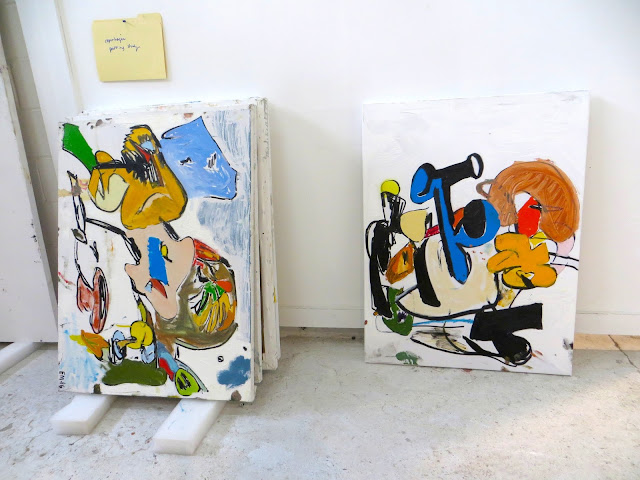 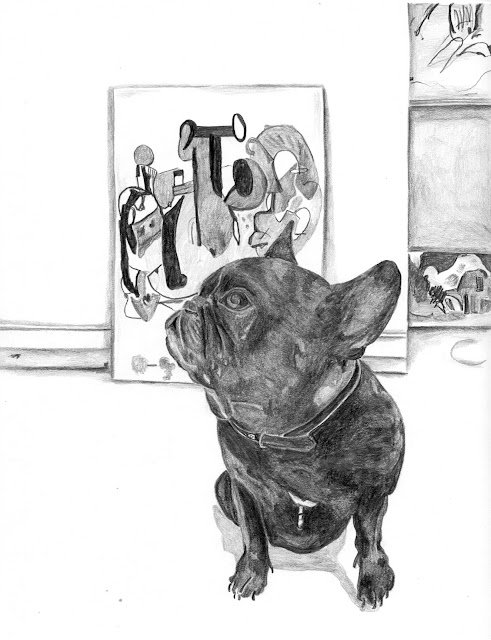 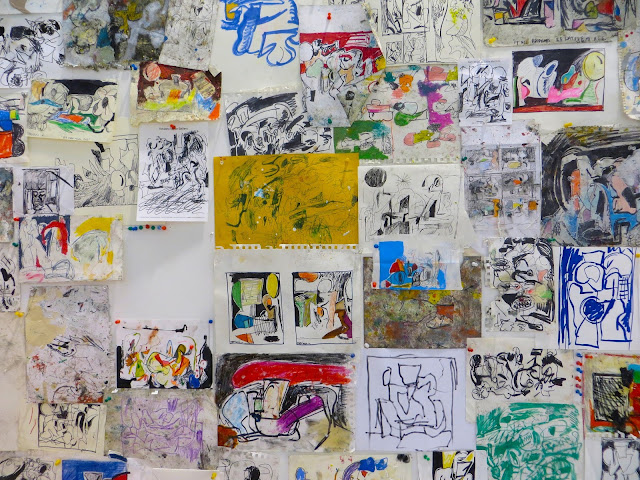 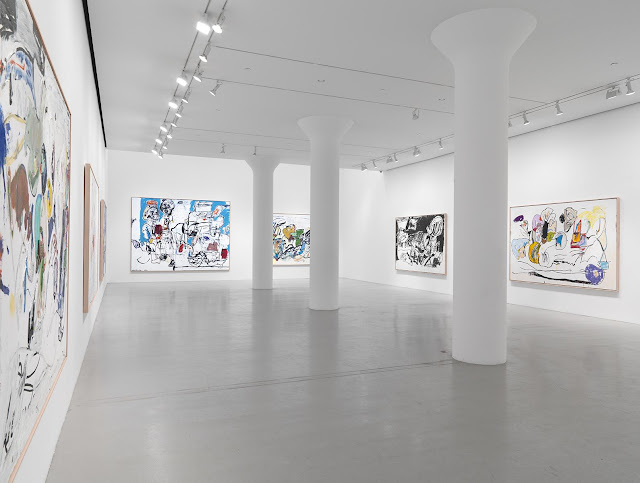 Two round dogs happily trotted around the studio as Eddie, his assistants, and I worked throughout the afternoon. Fran, Martinez's pup, even posed a few times for the camera towards the end of the day. I couldn't resist penciling her in along with his paintings. Above is a view of his recent show "Salmon Eye" at Mitchell-Innes and Nash. To see more of Martinez's fantastic work go here  http://eddiemartinez.net/.
Posted by Maria Calandra at Wednesday, June 01, 2016 No comments: