Several weeks ago I went to Pat Berran and Chuck Webster's opening at No Globe Exhibition Space on the corner of Division and Morgan. Each of the artists had filled their own large wall, ceiling to floor, with drawings or works on paper. On an adjacent wall, each hung a singular painting. I appreciated this presentation — particularly interested in how an artist's drawings can inform their paintings and vice-versa. I soon started up a conversation with Chuck. I was taken by his abundant wall of abstractions, varying in size and chock-full of his particularly gratifying brand of mark making, shape formation, and color. Realizing that these small works on paper were closely related to the large paintings hung at his recent solo show at ZieherSmith this past Spring, it reminded me once again how drawing often starts our artistic fires. Chuck and I decided to pencil in a visit — time being of the essence — as several of the paintings he was finishing up were being shipped off to St Louis for a solo show at Philip Slein Gallery that opens November 16th. 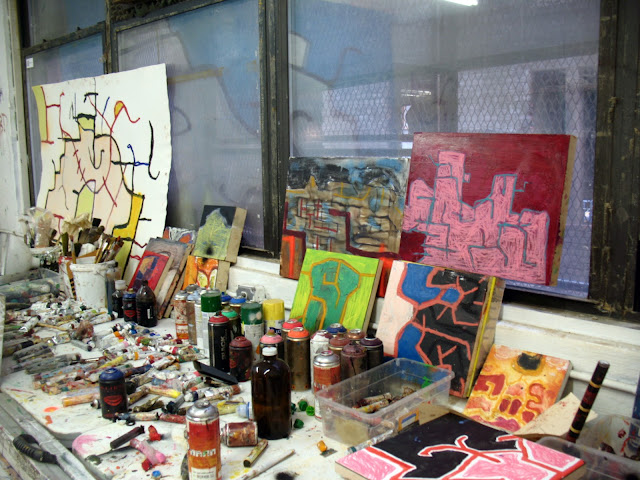 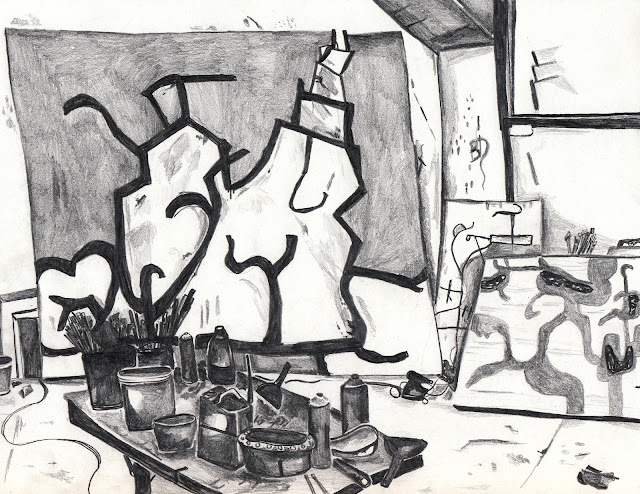 I got a real sense of the activities to come when I entered his studio and saw the effects of the previous day. Chuck explained that the first order of business for him was to straighten up his space: sweeping, moving paint around, sifting through drawings, placing the panels that he would be working on where they needed to be worked on, and putting his dog Sophia on her bed. He told me that this is how he always starts things off — going through the studio helps him figure out what his next painting moves will be. I was set up in the corner, carefully laying out the groundworks for my drawing as he finished up reorganizing. He asked if I would mind listening to some episodes of The Sopranos as we worked. Not at all, I told him. I kind of find that the blurred sound of voices and confusion of a cut up story line can act like a healthy distraction when making art. The nineties Mafioso crew insisted we stop for a laugh from time to time while Chuck attentively fast forwarded through the super-violent parts to keep the conversations we were having over the show light — or at least painting oriented. 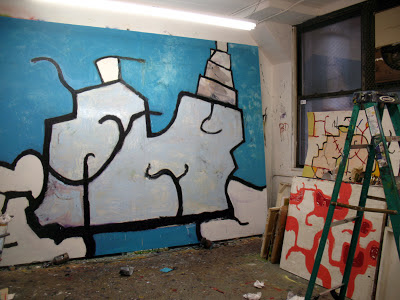 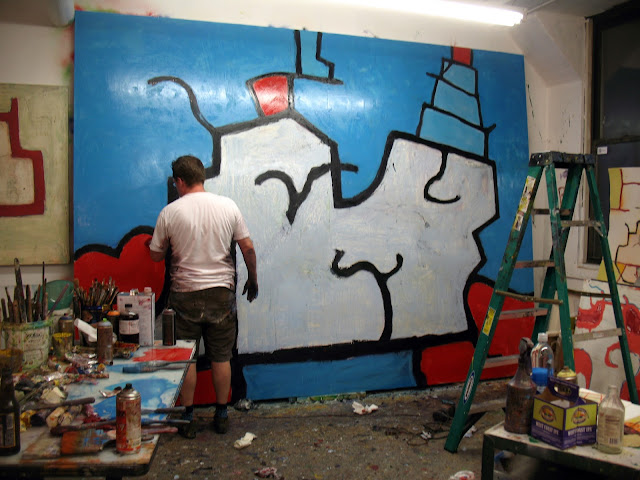 One of the paintings Chuck was working on took several turns while I was there. Witnessing this progression in real time made me hyper-aware of what kind of attention to the surface each panel is given. The results being vast areas of ethereal and diverse color fields, the kind only oil paint can make. At some points entire skins of paint where scratched or rubbed off with sprays of turpentine, while piles of paper towels collected on the floor to once again be swept away the next morning. It was an exciting and somewhat intense thing to watch, or listen to, or occasionally look up at — seeing sections of paint with their thick black borders, turn from white, back to green, back to white, then to a luscious very light blue with portions of startling red. 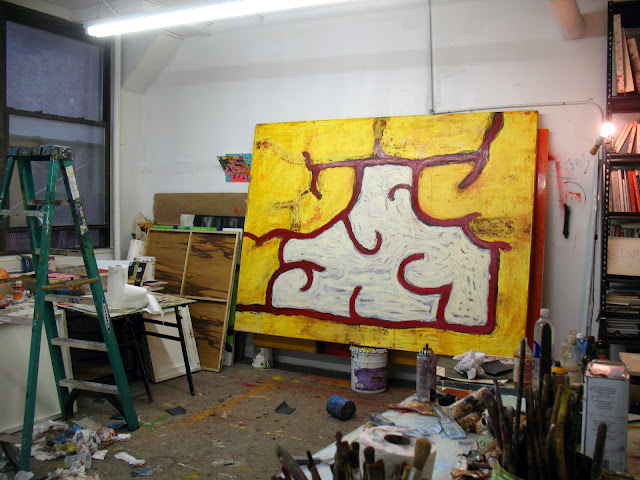 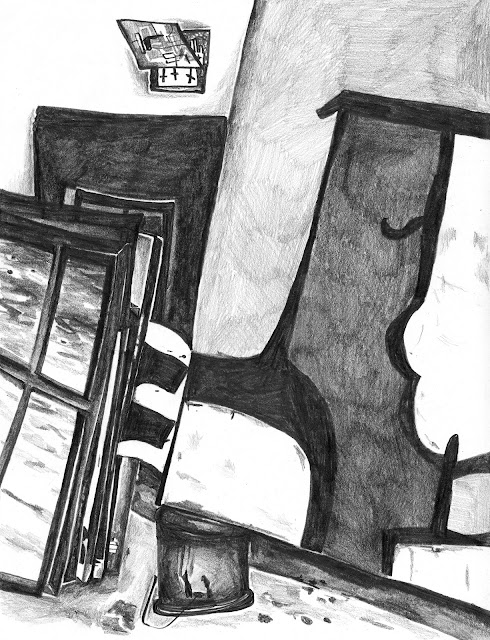 After having done several of these visits, without fail, I find a few secrets to the studio on the book shelves around me. I wasn't surprised to see an easily accessible shelf that held books on Joseph E. Yoakum, Dubuffet, Carrol Dunham, and Matisse. And that's only the tip of the iceberg; Chuck had a large collection of oversized art books. However, this doesn't necessarily help me to explain what I see when looking at Chuck's towering panels — heavy black contours giving a contradictory sense of heft to his otherwise delicately considered formations. His invented lexicon of characters allows the viewer to decide for themselves if it is figure, furniture or hieroglyph. They do seem like exaggerated or blown up small drawings, or, to quote Roberta Smith (and the title of his show in St Louis) "Little Big Paintings." I also see them as singular thoughts — a perfect one word description — made on a grand scale. 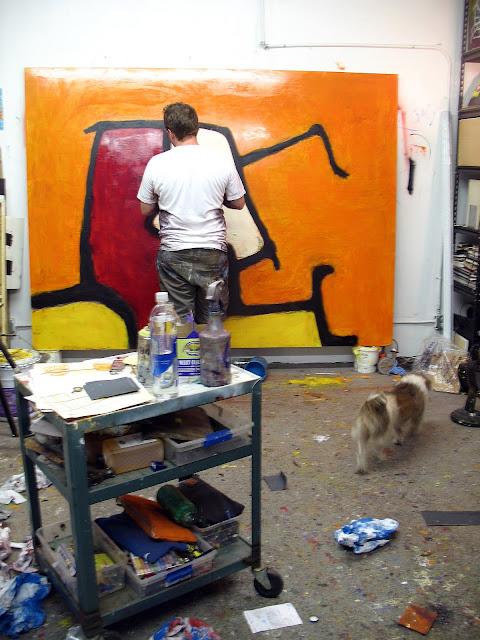 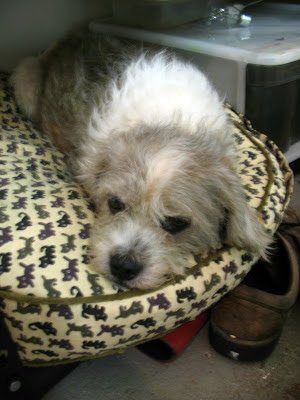 We listened to a few more Sopranos episodes before switching to one very poignant episode of Louie, closing out our studio day while sipping on a couple Bay Area beers to cheer on the SF Giants as they got ready to win their 3rd game in the World Series later that night. I ended up leaving in a hurry to catch the beginning of the game and left a drawing behind. I went back a week later to pick it up just before the paintings got packed away. Chuck was sitting in his chair, quietly staring at his large panels when I came in. He told me the last step of his process was four hours of looking. I was happy to see that Hurricane Sandy hadn't placed her heavy hand on his studio space; sadly this doesn't go for all the artists with studios in Greenpoint and my heart goes out to those less fortunate. To check out more of Chuck Webster's rad work go to http://chuckwebster.biz/home.html.
Posted by Maria Calandra at Wednesday, November 07, 2012 No comments: