I found myself in Red Hook again in the same building that Michael Berryhill's studio is in. This time I was visiting with artist Sarah Mattes, entertained by the fact that for the second time around I was convinced it wasn't the right building because of a sign at the top that reads "STORAGE." Lost on the huge floor where the artists are "stored," Sarah tracked me down and escorted me to her space. Sarah had quite a few new pieces laid out on the floor and hung on the walls. It felt like it was somewhere between an art installation, a working studio and construction zone - it was brimming with energy. As we began the day talking about her new work and catching up on what shows we had seen and which openings we had gone to so far this fall, I got out my little bag of pencils and she got out her big bag of clay. We were ready to do our studies, hers in the third dimension and mine in the second. 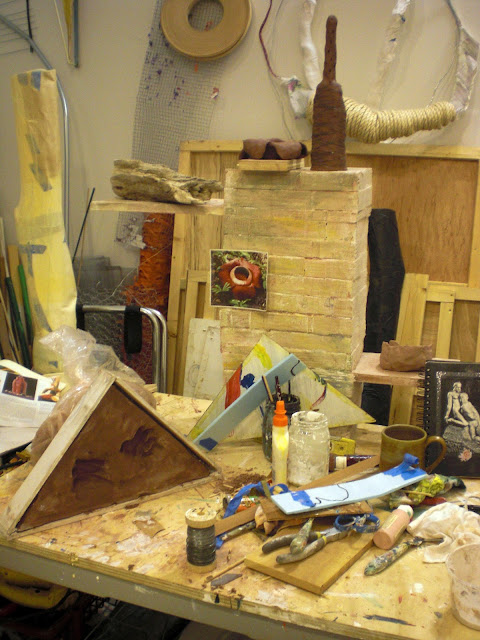 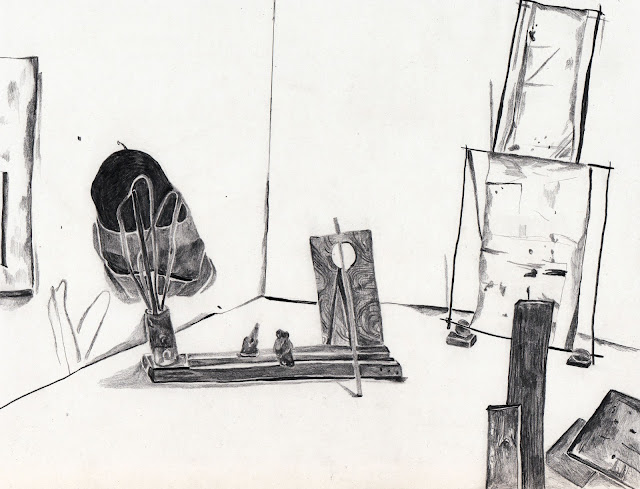 Two hours into looking at her work, I began to really let my imagination make a run for it. Sarah's sculptures/paintings are good at giving that run a head start. I began to think that her sparse yet intricate pieces sometimes look like scaled down stage sets. Not a set you might find for the newest Broadway Musical hit, but more like one that would be used for a play associated with the Theatre of the Absurd. I could almost envision thumb-sized actors walking back and forth among her collages of found objects. Maybe it is Nagg and Nell from Beckett's Endgame, sitting nestled in their dustbins at the edge of one of the repainted faux tiles Sarah uses as a base for one of her pieces. Discarded planks of wood stand like pillars or suggest the corner of a room - the details of dried up vines that once grew on the wood giving it a definitive history. Her work allows the otherwise discarded objects to live in a kind of fantasy world, where all things hold importance, from a spoon used to mix plaster and paint to a drop cloth saturated with yesterday's stains. 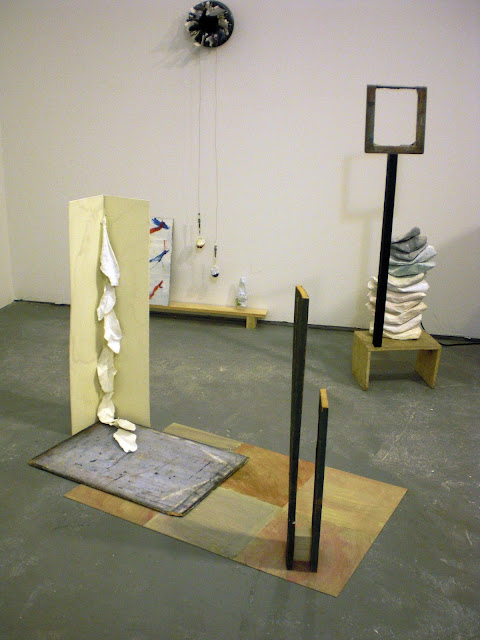 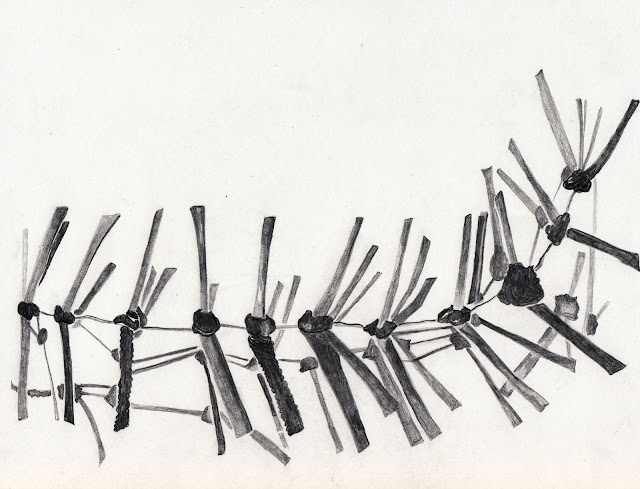 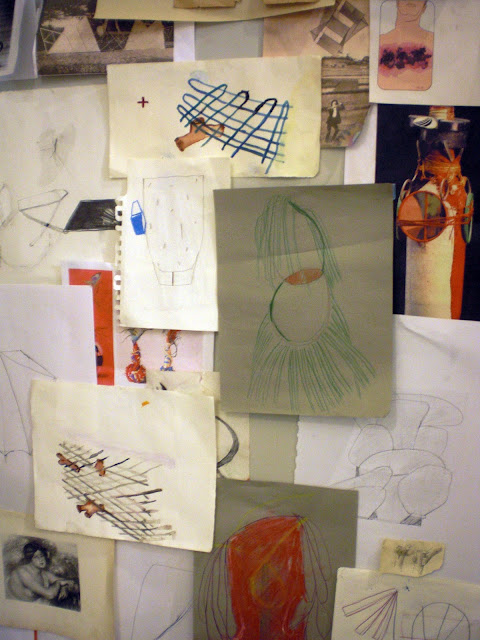 Sarah explained to me that much of the materials she uses in her work she happens upon on the street or down the hall in her building. It is very rarely a Home Depot sort of situation. I loved hearing about the free pile that has developed on her floor. She told me that at the beginning there were these crazy finds and slowly the finds began to have price tags on them as folks realized they might be able to make a profit from their studio debris, which is not so good for scavengers like Sarah. She did buy several bags of clay from the pile at a very low price, and she later discovered that she could fire clay works down the hall on her floor. I could see how this kind of serendipity finds its way into her life as an artist. Her work is alive with the chance happenings of her experience. 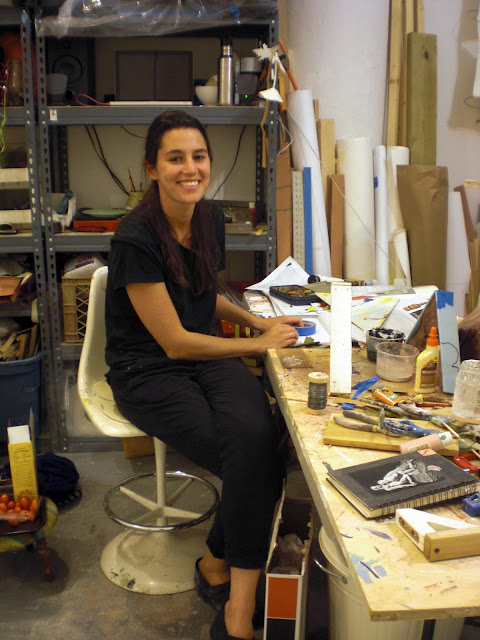 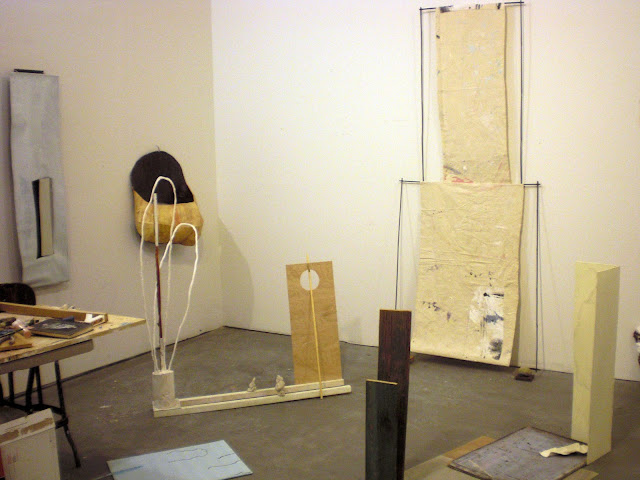 We ended our time together with scrumptious bites of fig on toast and some talk over whether or not we would make it out to openings that night. Sometimes after such a productive day it just feels so good to go home and prepare for the next day in the studio - nothing to disrupt the flow. She is curating a show at her alma mater Collgate University in the Clifford Art Gallery called External Original, which is up from October 29 - November 20, 2012. She is also in a show upstate titled Excursions on a Wobbly Rail that is curated by Brad Hajzak at Roos Art in Rosendale NY and is open until November 17th. That would be a nice trip up the river, equal parts foliage viewing and gallery going. All and all Sarah and I had a choice time together. Please check out more of her work at http://www.sarahmattesstudio.com/.

Posted by Maria Calandra at Friday, October 19, 2012 No comments:

Except for the tiny sign that hangs outside the door simply reading "studio," you would never know what magic lay behind this covered up storefront building on a busy street in Williamsburg. Greeted with an exuberant handshake by artist assistant Max Heiges, I was led further and further back, past walls of art books, shelves packed with sketch books, and numerous paintings, into the storefront turned studio space of Chris Martin. He acquired the building in 1984 after having moved his studio to Williamsburg from SoHo in 1980. Along with Max, assistant Linnea Kniaz was hard at work building large stretchers, 135" x 118" in size, for canvases that Chris had worked on while upstate in the Catskills this past summer. There was a lot going on between the four of us, drills drilling, painters painting, pencils drawing. Not to forget tails wagging - much to my delight, Tamara Gonzales and Chris' Pomeranian also spent the day romping in and out of the space. 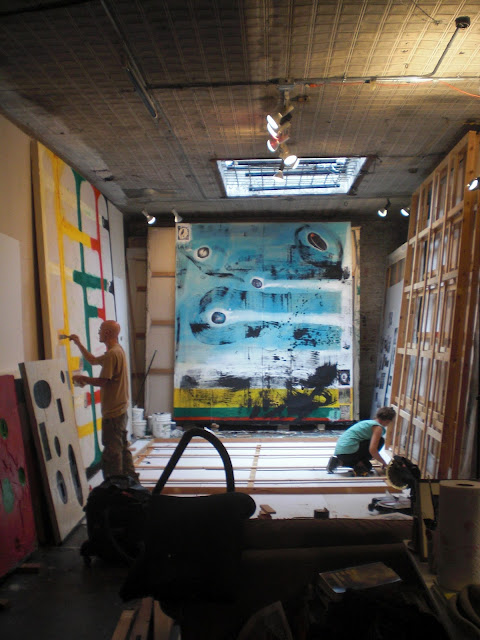 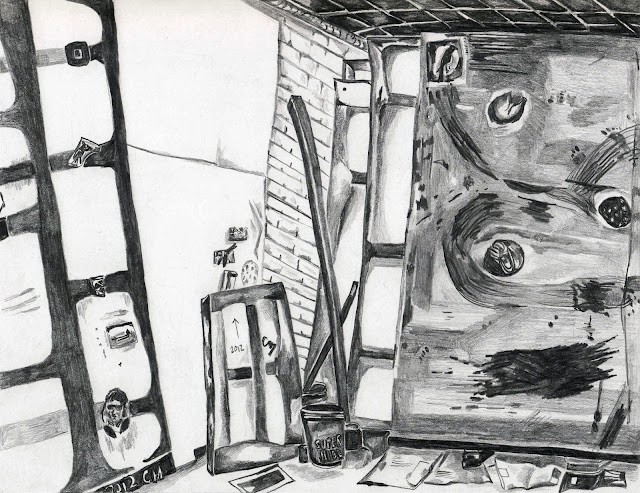 Towards the back of the work room there is a moveable wall where Chris has put up images he will eventually use in his next installment of 280 + Cover. The first book in this series, the "Yellow Book," was sold at Koch Oberhuber Wolff in conjunction with a solo show in the Fall of 2010. He sent me home with a copy. Leafing through its sundry collection of photos, the book gave me an even deeper look into his practice, acting like a dialogue between his thoughts, his work and his everyday world: images consisting of his paintings, upside down trees, piles of junk, drawings, gnomes on rooftops, fluffy dogs on mountaintops, jam sessions, painted faces and cars, mushrooms, and award winning sheep. Chris' paintings and drawings already seem to come directly and generously from his life, calling on both his memory and immediate reality. Sometimes he does this by merely hinting at a landscape that he has experienced and physically attaching images or objects he has come across to the canvas. Or, in other ways, he might do this more explicitly by paying homage to the things that are influential or important to him, as he paints an artist's or musician's name across the bottom of his canvases. 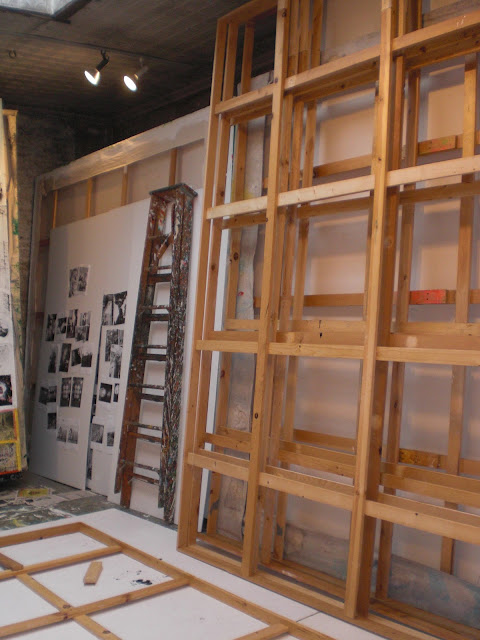 Chris explained to me that he painted on the soon to be stretched canvases while they laid in the grass behind his house upstate. You get the sense of how much his summer backyard had a hand in his process: the sky dropping water and shining a drying sun, the vibrant greenness and growth of the garden and grass giving an influence of color, footprints of animals and human's bare feet showing up scattered across the surface. In this instance, I see Chris playing two roles: part painter and part facilitator, collecting Summer's vitality by making these works a history of his days spent under the open sky of the Catskills. 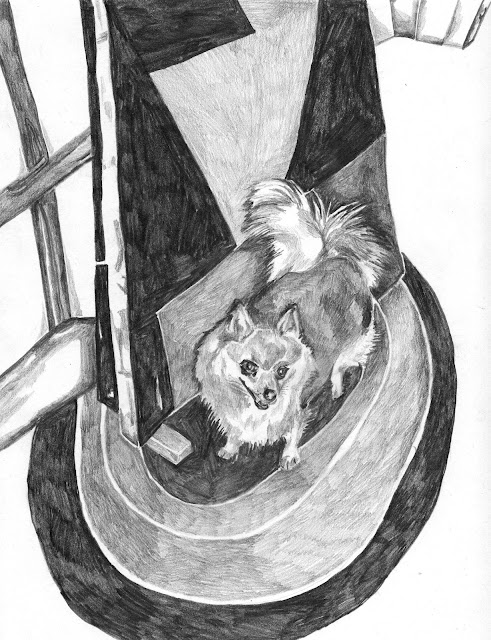 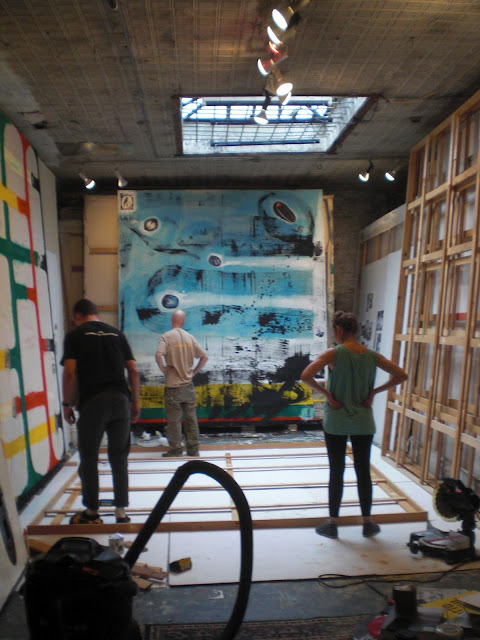 The three working walls in Chris' studio are covered with layers of paintings. I thought that eventually the whole space might close in on him like some trippy Twilight Zone episode -- the artist enveloped by his own artwork. His incredibly large paintings tend to do this to the viewer on their own, enveloping us in their size and liveliness. Max and Linnea put together the massive stretchers throughout the day, having time towards the end to stretch a canvas on one. Propping it up against the wall, I imagined this to be the painting's vertical unveiling. 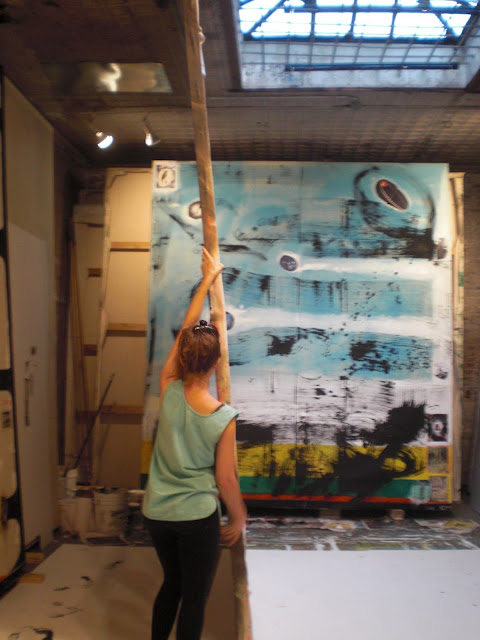 Chris and I talked about our mutual love for drawing. He told me that he had piles of stuff drawn on loose paper and showed me the shelves where he stored years of sketchbooks; he told me how his drawings often becomes the basis for his paintings. For me, spending the day drawing his new paintings, squinting to get the photo of Dylan pasted to the front of one of them to halfway resemble Dylan, while Chris closed out the studio day with some beats on his bongo drum, was an affirmation of why I love art. Check out more of Chris Martin's work at Mitchell-Innes & Nash.
Posted by Maria Calandra at Sunday, October 07, 2012 1 comment: