It had been years since I had visited Ivin Ballen's studio in Clinton Hill. You enter the space by going through a very well equipped wood shop, with various machines and wood shavings covering the floor.  Beyond the wood shop is a smaller studio space where Ivin paints his work after finishing it up in the shop. There is a long table in this room, of course handcrafted for its specific needs, that is covered with containers of Golden paint as well as the signature metallics he so often uses in his work. Above the table hung two box sculptures, some of the only few left in his studio. Ivin has been in multiple shows this season, he currently has work at Regina Rex in Bushwick, and Allegra LaViola in the Lower East Side. I was excited to get a peek at what he is up to now. 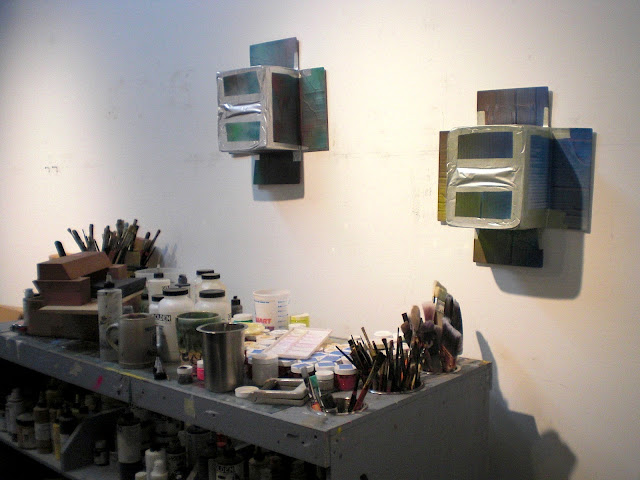 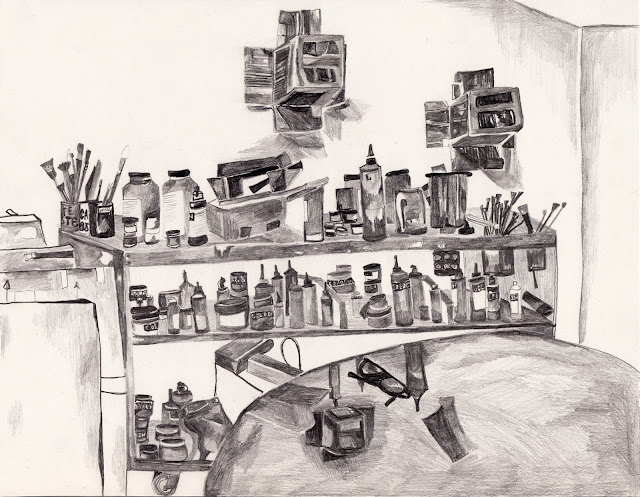 For several years Ivin has been making exquisite Trompe L'Oeil objects that appear to be made of the same packing materials that you might find in a studio, gallery, or museum. It is like he is doing studies of the tossed away materials that are used to take care of the art work as it moves from one place to the next, an interesting way to comment on the banal goings-on backstage in the art world. With all the necessary tools of a carpenter, Ivin begins to work on his meticulously crafted sculptural paintings. First, he creates a composition with the found materials, and then very carefully casts them. He described to me the trickiness of this casting system, how he has to build various armatures to hold the delicate parts of the cardboard in place. The two shown above were made for the body of work up at Allegra LaViola,  they are pretty literal renditions of simple boxes, you almost have to touch them to be convinced they aren't real. When he paints these aquaresin and fiberglass pieces, the tape becomes a more glamorous version of itself and the drab brown skin of the cardboard is elevated to an array of gratifyingly gradated colors. In other pieces, Ivin uses more than one kind of packing material, making found object-like sculptures that are painted with patterned motifs and strong, boldly colored shapes. These works are often partially covered in curious yet familiar textures that come well off of the surface. They are intriguing not only for their use of color and traditional minimalist compositions, but also their bizarre interpretation of everyday materials. 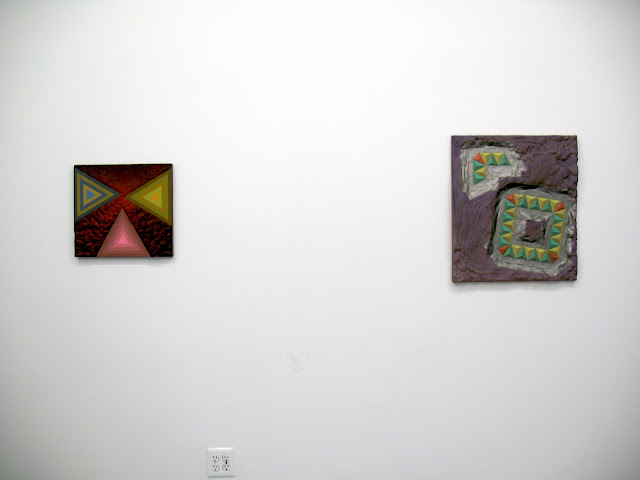 An install shot I took of the work up at Regina Rex. 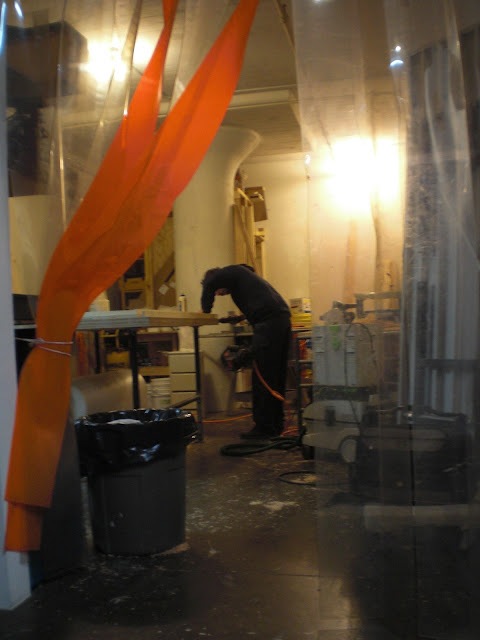 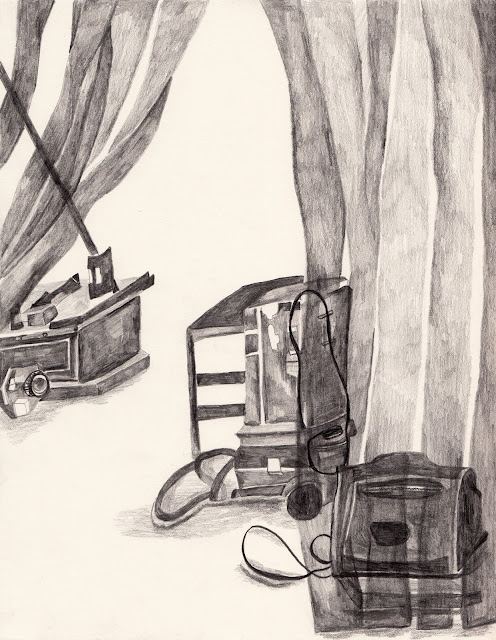 While I was there, Ivin was making rubber triangle molds for tiles, which he has since brought to Pittsburgh to make casts of. He is working with a company that manufactures alternative, ultra high performance concrete tiles, among other things: http://taktl-llc.com/. He showed me the different textured surfaces he will explore, cardboard and wood being two of them. It was interesting to see what goes into this kind of new process experimentation. He was building a crate that would fit the molds, just so, in order to get them to PA, and explained to me how the box would hold the slabs by taking up the exact amount of space needed so as not to be wasteful. A carpenter at work. 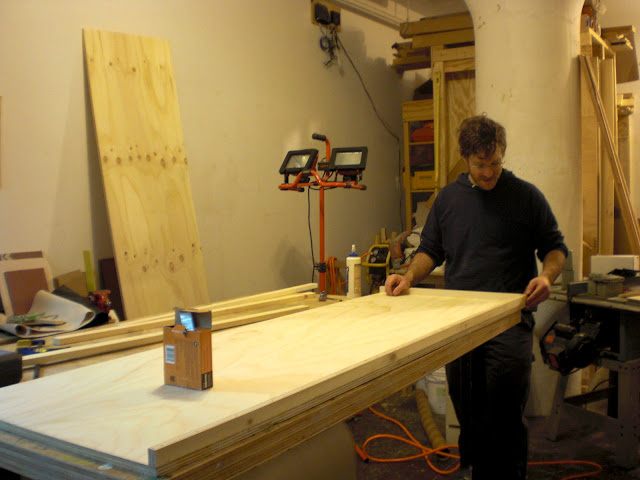 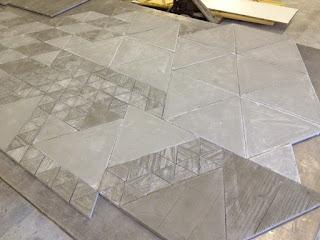 This is a picture Ivin sent me from Pittsburgh of the first casting batch. 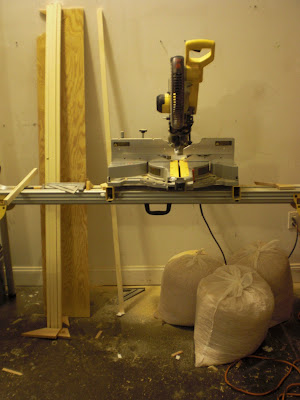 I liked drawing with the noise of the band saw, a fall rain shower, and music steadily streaming from the background. It was so active and hectic in there. We both looked up periodically to comment on a tune or two that was playing (Ivin shared a lot of his musical interests with me). There was the great energy of the unknown in his studio that day as he worked on his new ideas. Please go to Regina Rex and Allegra LaViola before the shows come down and be sure to check out more of his work at http://www.ivinballen.com/.
Posted by Maria Calandra at Sunday, November 13, 2011 No comments:

While taking the 7 train to Jackson Heights a few Sundays ago I was getting pretty fired up to see Christine Heindl's new paintings. Nestled inside of one of those distinctly Queens-like apartment buildings is her studio. I am always struck by how much space there is, two sizable studios, a bedroom and a perfectly warm yellow kitchen where she greeted me with a cup of tea and some very tasty baked goods. As I stepped into the first studio room I was immediately transformed by the hypnotic vibrations that emanate from her work. She explained to me the feeling that she gets from being in there for so much of her time, she said sometimes it feels like the walls are closing in on her. After several hours spent drawing, I got that same feeling, in such a very good way. Enveloped by her art. 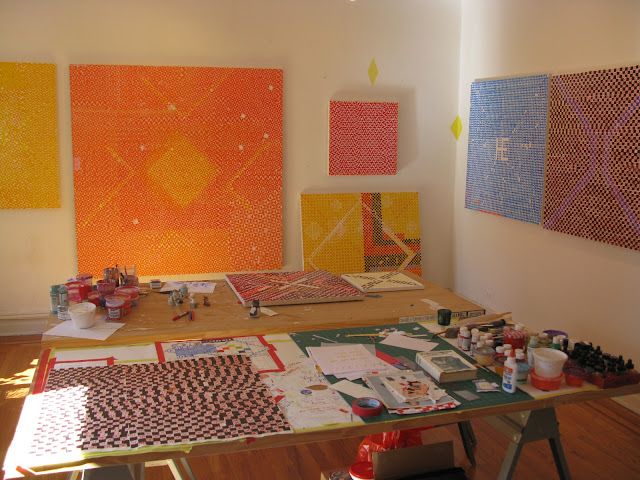 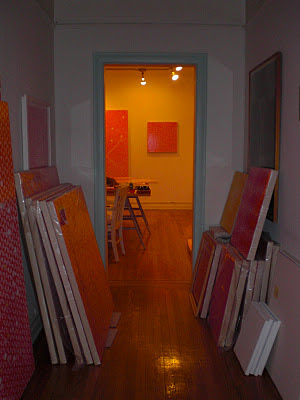 As we began to talk, draw and paint, I kept thinking about the painting that was hanging on the wall behind her. All the small colored triangles in this work collectively form lines, various larger shapes, or subtle changes in the color field except for one, a glorious peach triangle that is left a singular hue, a tiny difference that acts like a key for the rest of the piece. Once you discover this, it begs you to unlock all the paintings' hidden secrets. Something that has always drawn me to Christine's work is this kind of visual leap the viewer takes from one viewing distance to another. The closer you get, the more of the intricately painted canvas is revealed and the less you are aware of the boundary between your body and the painting. The bizarre spacial makeup of these works make them seem as though they are  hovering, not quite making contact with the wall or even keeping still. 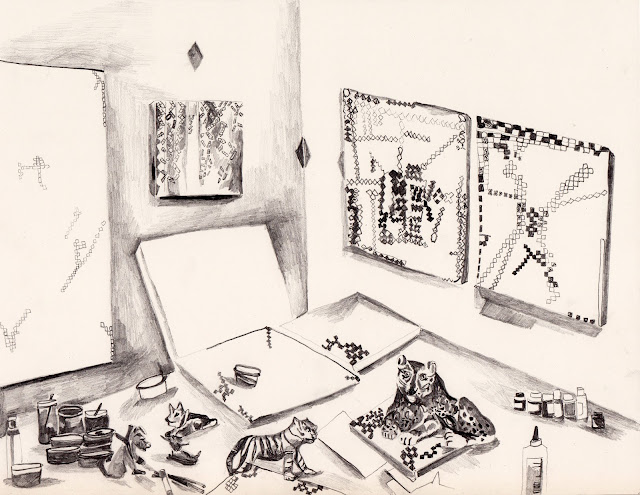 I spoke to Christine about her process. First she attaches paper to the canvas in order to create an ultra smooth surface. Then she begins applying paint with a thin brush to tiny spaces of pattern across the canvas in a grid-like format. Sometimes she defines this grid beforehand and sometimes not. When the grid is not defined the lines appear to be undulating like a sea of calm waves. The next several steps in her process can be fairly intuitive, when she is beginning to paint in the different shapes over the patterns, be them diamonds, squares, or triangles, she lets the painting tell her where to go. Christine explained that she came to the HE spelled out bellow by seeing it begin to appear in her painting and deciding to help it along, reminiscent of a Ouija board's job of pushing you to go to the letters you are suppose to read. Occasionally there is other text in the work that she has previously decided on and will sometimes paint in a calligraphic hand. A simple capital Q, a row of As or letters spelling out TO THE. Recently a face emerged in one of the squares as she was painting it; now she has begun to use this motif in other works. The faces, with their different expressions, create a surreal viewing moment. At first, from afar, you don't see them, but after approaching the painting you begin realize you are being stared back at. 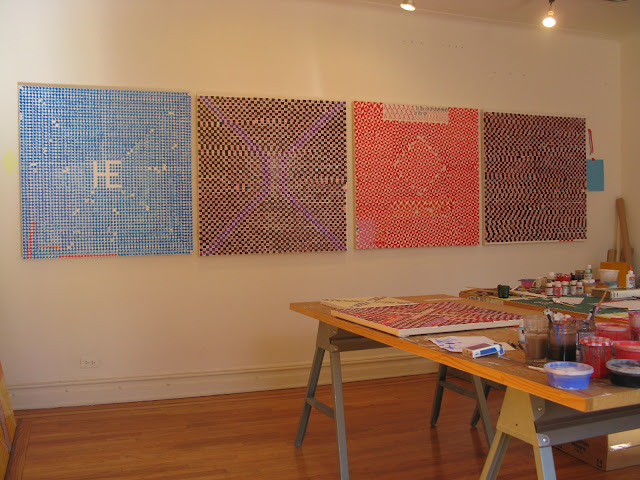 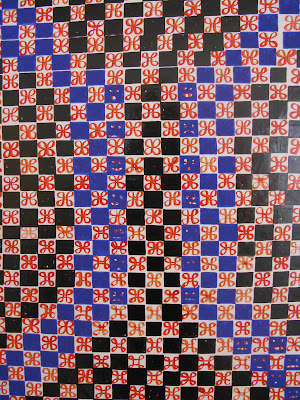 Christine works flat on a table that takes up nearly half the studio space, covered with sheets of paper, tubs of paint, and little creatures. She let me arrange the group of them bellow to draw. I was betwitched by one friend in particular, Dorothea, a large soft Leopard who seemed to be holding court. I suppose when working on things this detailed, time consuming and eye blurring, it is good to have someone on your team. Studio friends are the best. 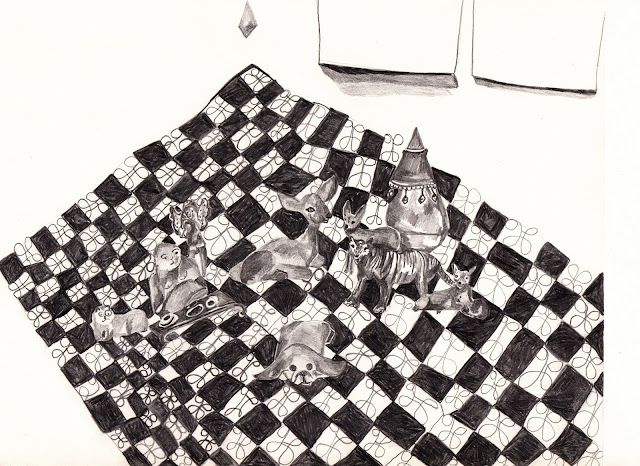 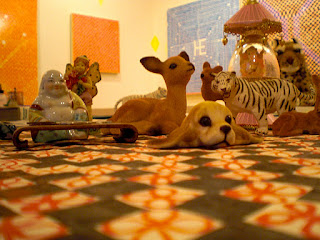 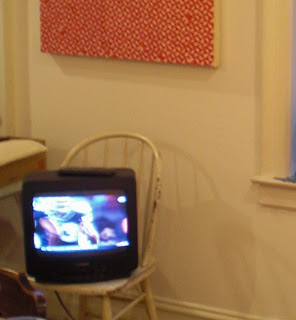 We listened to the games as we worked and talked about the art world and our studio practices, nothing more cozy on a Sunday afternoon than the light sounds and flickers of football in the background. Before long it was time for her to put down her paint brush and me my pencil and hit the culinary scene of Jackson Heights. It was so pleasurable to spend a studio day there in Queens. I have been looking to Christine and her paintings for many years as a source of inspiration, I can't say enough good things about her and her work, please check out more at http://christineheindl.com/home.html.
Posted by Maria Calandra at Thursday, November 03, 2011 No comments: