There are lots of things I like to think I might be able to do if I tried, knowing full well that I will probably never try them. Directing a play, for example, or making a beef wellington. I recently visited with Melissa Brown while she was getting ready for her solo project at Essex Flowers that opens this Sunday, January 18th. I was reminded that not everyone merely thinks about what they might be able to do, but some actually do it and do it really well. Brown has been making stop-animations and paintings in tandem for some time now, not to mention the fantastic prints that are also part of her repertoire. It seems like an easy enough transition from making paintings to animations, but as I discovered on our visit, it takes a lot of finessed imagination, makeshift mastery, and patience to actually do it. We got to work right away, seeing as she had a deadline and I had a drawing to make. 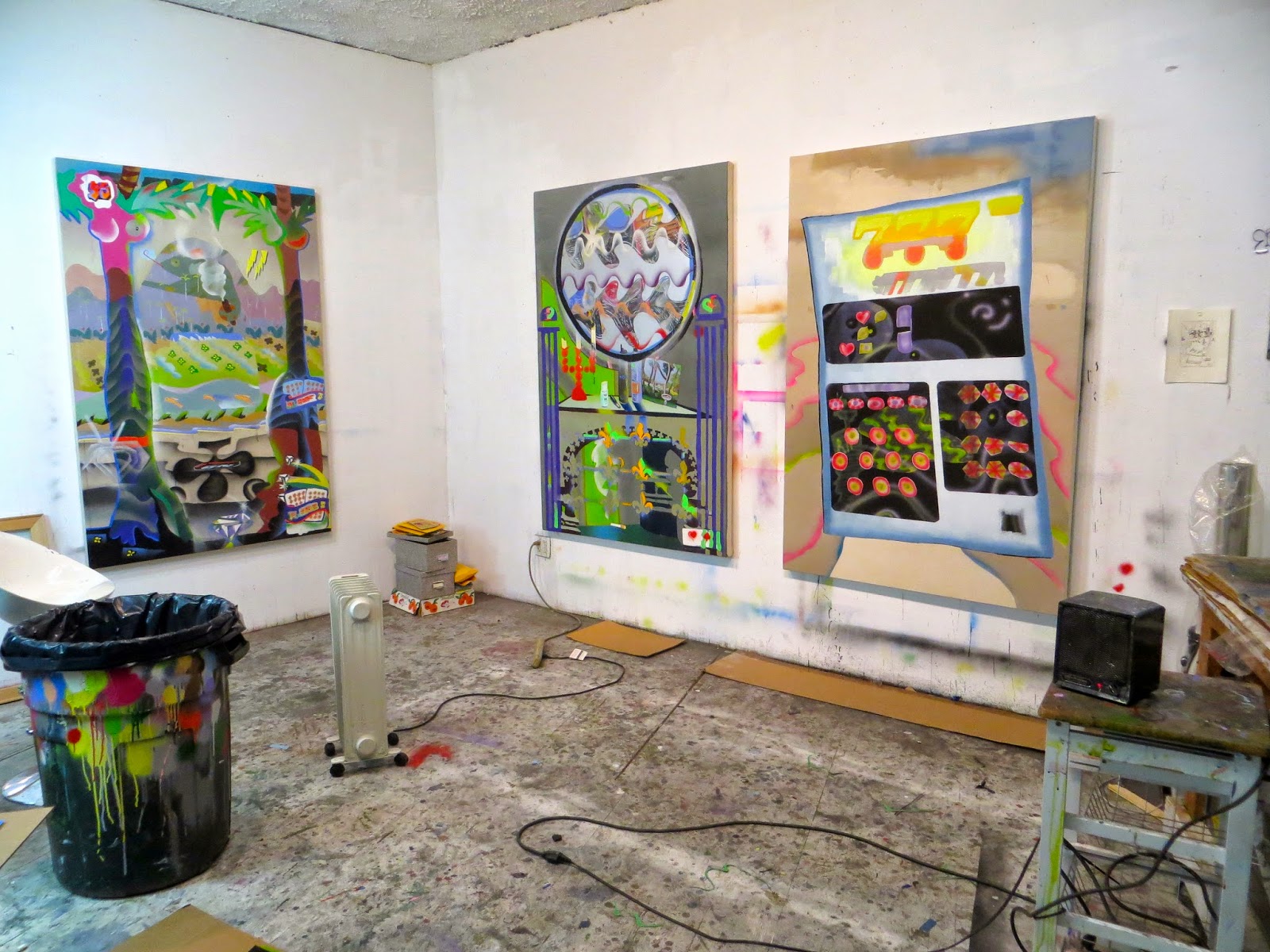 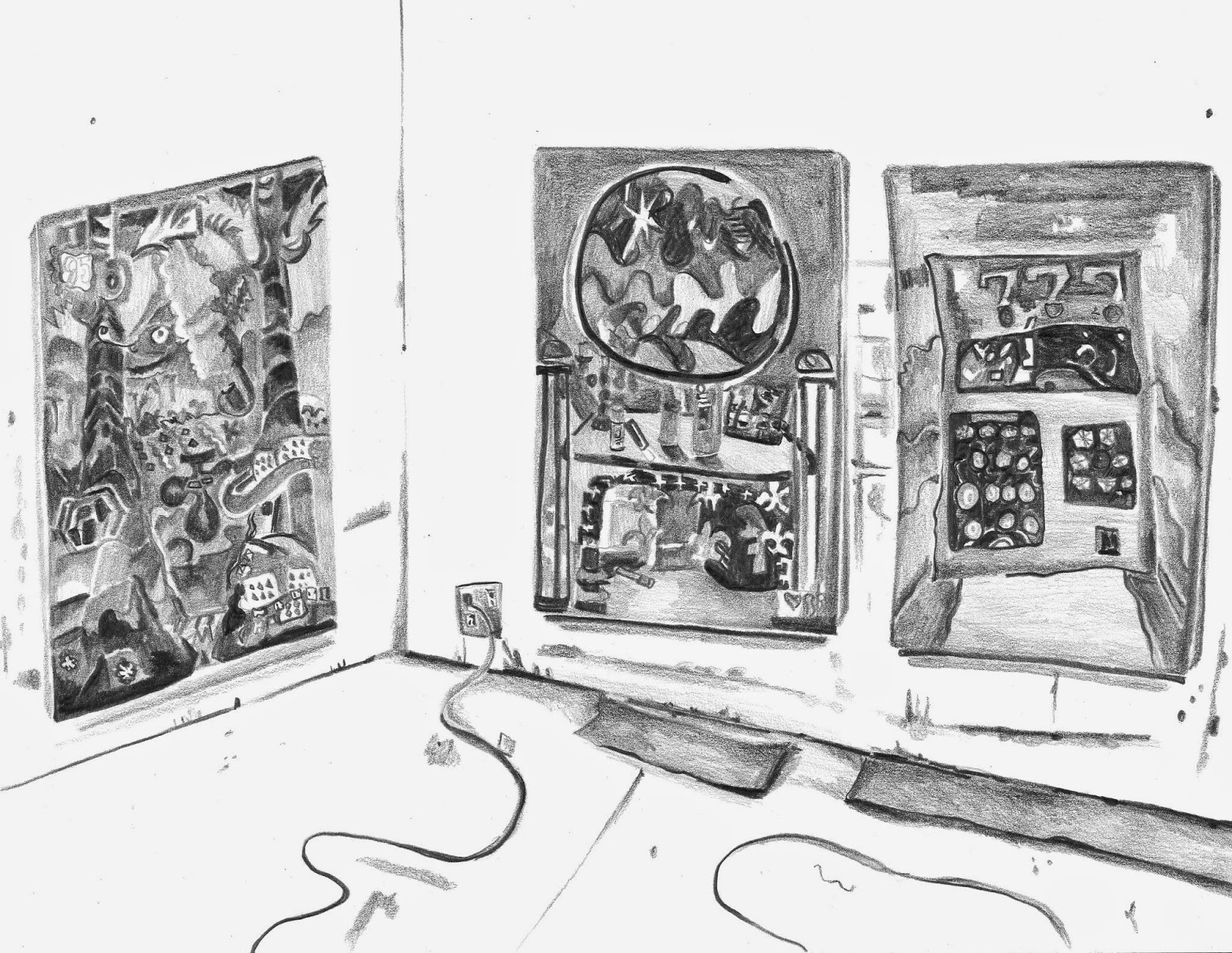 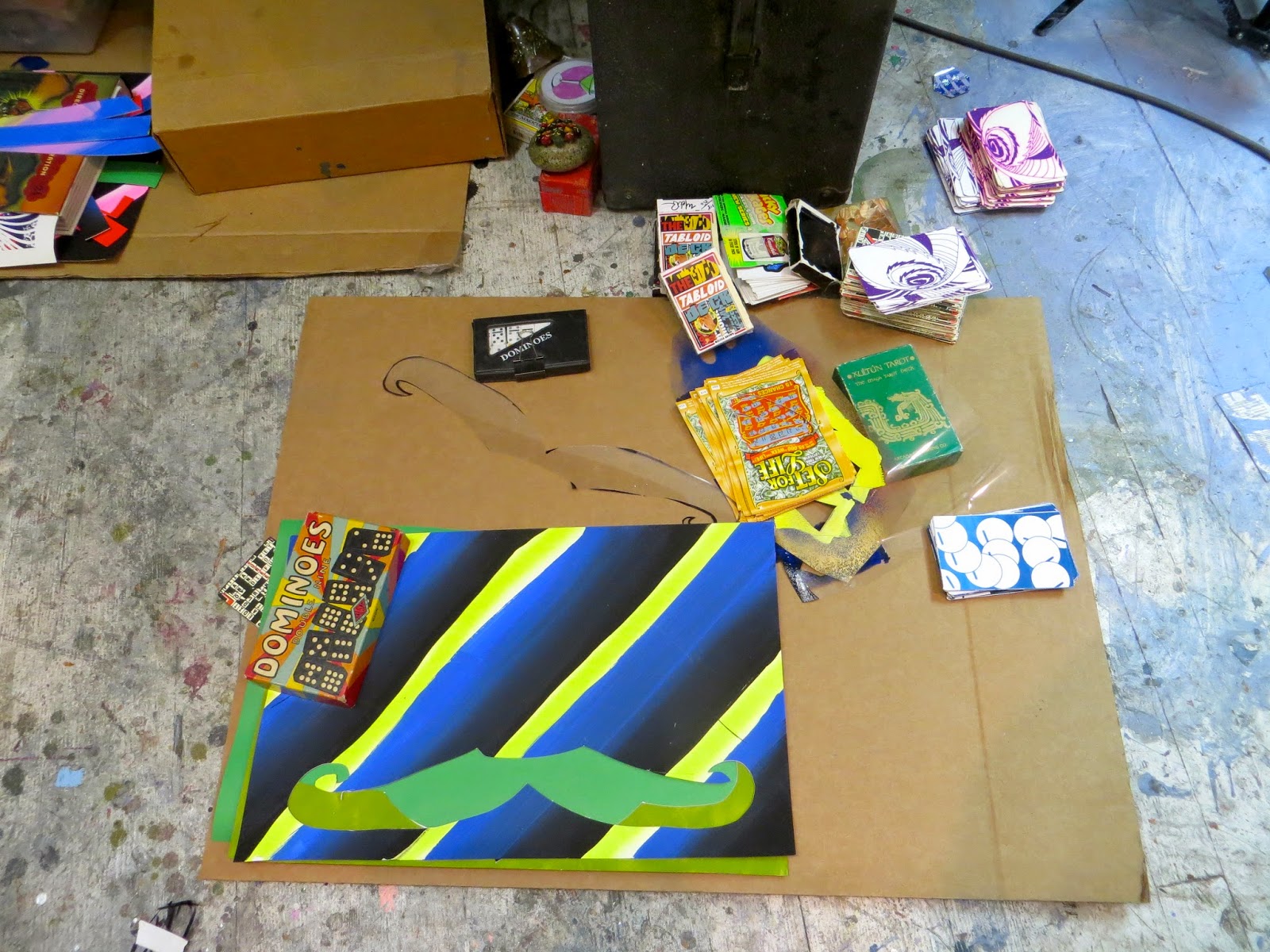 Melissa had three paintings in three different stages of completion up when I visited. They stood long and tall against her walls and I immediately got tangled up in their hot colors and intertwining patterns and shapes. Having followed Brown's work for awhile now, I was very aware of how her newer paintings were taking me to an even more fantastical place than ever before. The story of this place was now being fleshed out by fuzzy edged objects and suggestions of characters or possible situations, as opposed to the more naturalistic landscape references of the previous work. We talked about Melissa's interest in gambling and casinos and the fantasy and spectacle that surround both. Her imagery picks up on that particularly bizarre energy —literally—through the depiction of things like lotto tickets that seem to vibrate in their pre-scratched off state and card suit symbols dancing with bling. It also alludes to the low roller's dream of what "could be,"  after hearing the sounds of a winning slot machine, with tripped out palm tree mirages suggesting destinations for the newly rich. From what I saw of its completion, her animation also closely relates to the subject of gambling culture using some of the same players as the paintings. I imagine the show might put you right in the middle of one of Atlantic City's casinos on a Monday night at 3 am. 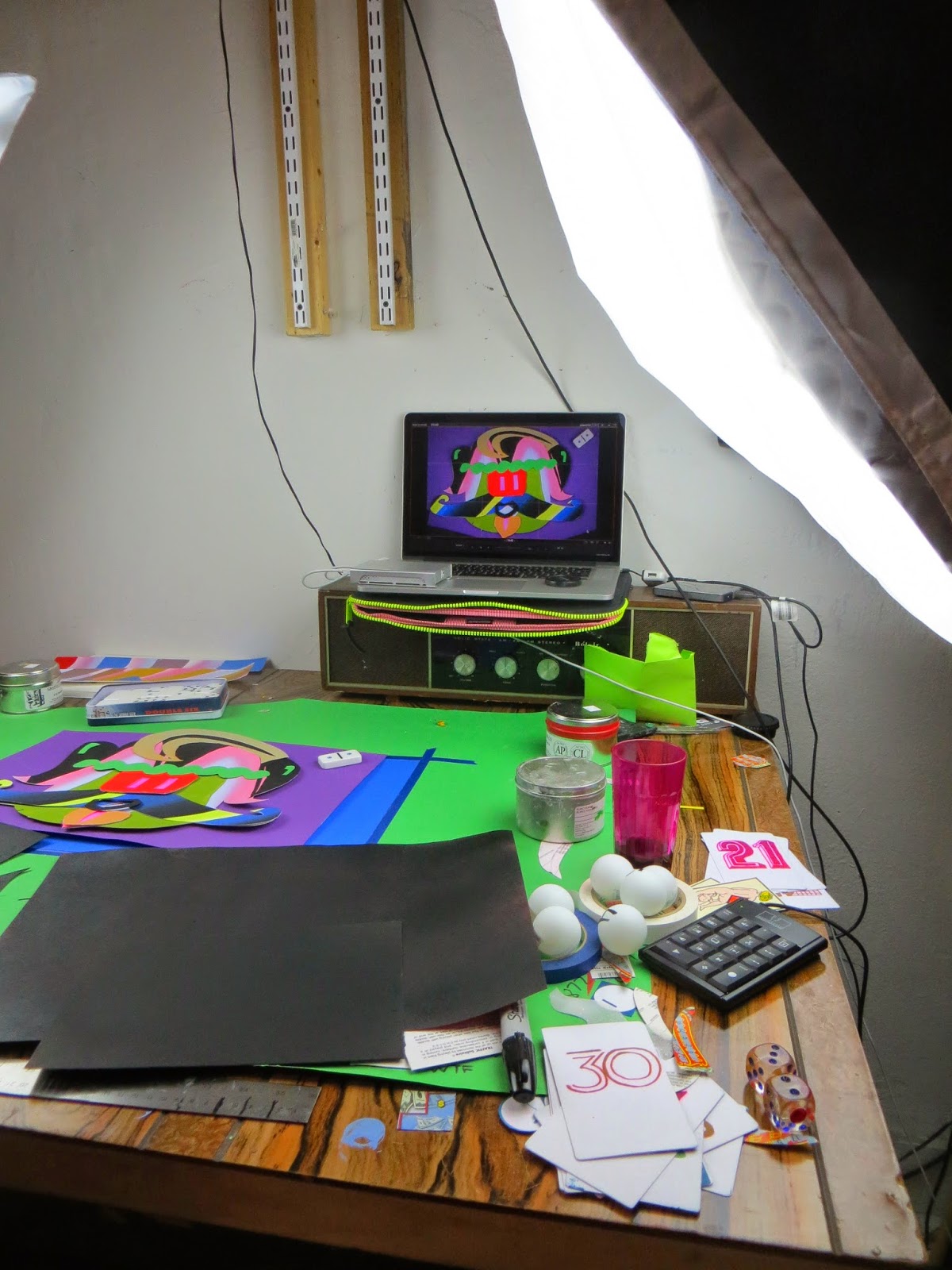 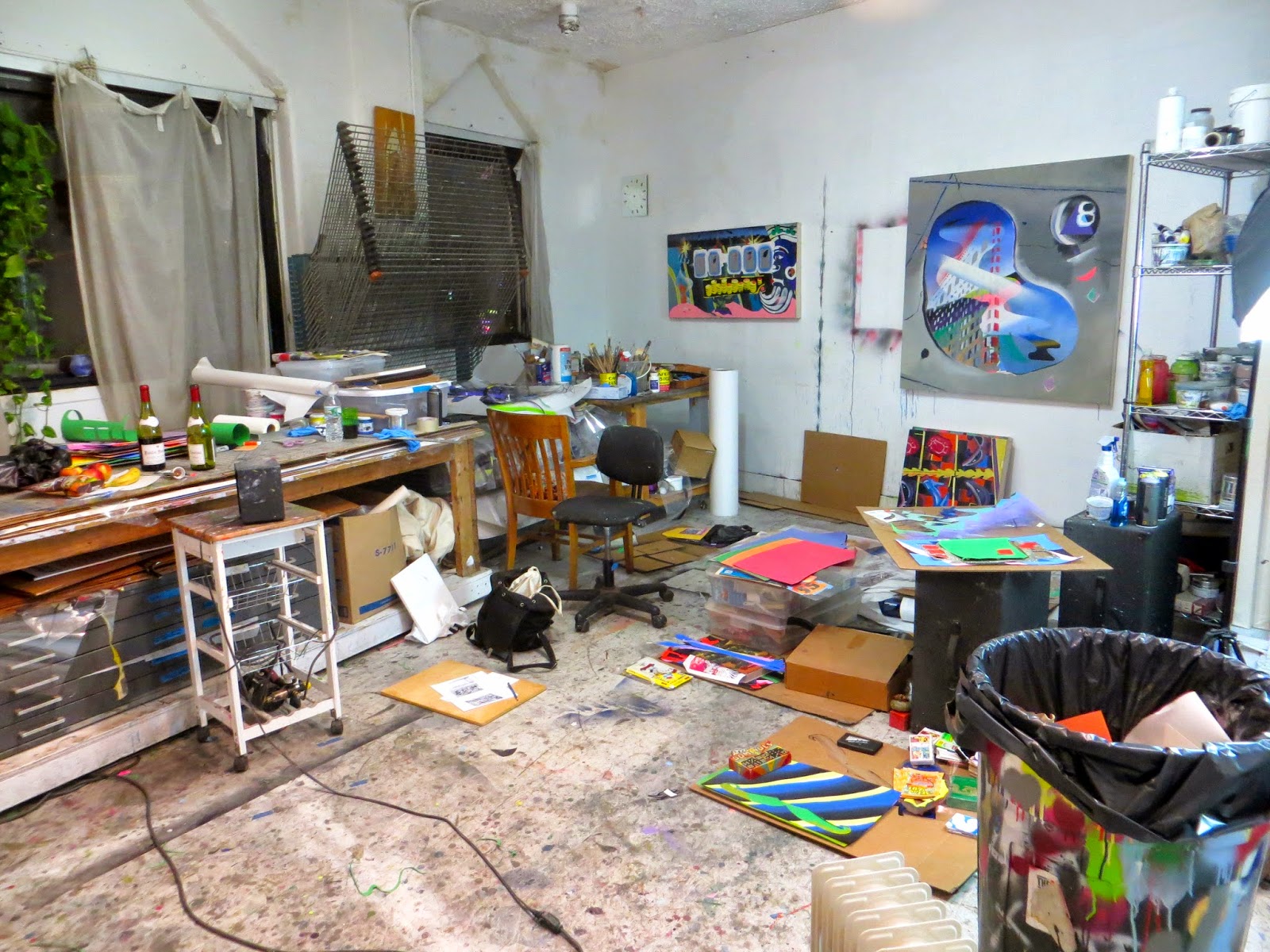 It was pretty cool to look up from my drawing to see a single click of her camera before she made a slight change in her composition and clicked again. Only occasionally did we glance up at one another as our conversations went from art to travel to food and back to art again. A couple of glasses of red wine helped us keep warm, even though she had warned me it might be cold in her studio. Located in a predominately Caribbean neighborhood, Melissa also set me up with an amazing and self-proclaimed "best" jerk chicken. Obviously, I am trying to figure out a way to draw her studio again. To see more of her work go here http://www.melissabrown.tv/ and don't miss her opening this Sunday the 18th at Essex Flowers.
Posted by Maria Calandra at Monday, January 12, 2015 No comments:

I was glad to be able to sneak in an evening visit with Saira McLaren just before settling into all the holiday hullabaloo a few weeks ago. We met at Graham and Meeker to walk the last few blocks to her new studio space while dodging the cold rain that slowly began to fade in our favor. Housed in a building whose second floor was recently built out for studios, fortuitously by artists, McLaren and her Husband Mike Hein have spaces side by side. Saira, knee deep in preparation for her solo show at Sargent's Daughters opening January 8th, set me up with a cozy seat and quickly got to work. We commented on the dry cleaner's radio station choices that we could hear through the walls as we settled in for the night. Decidedly, we liked it when they landed on the soft rock. 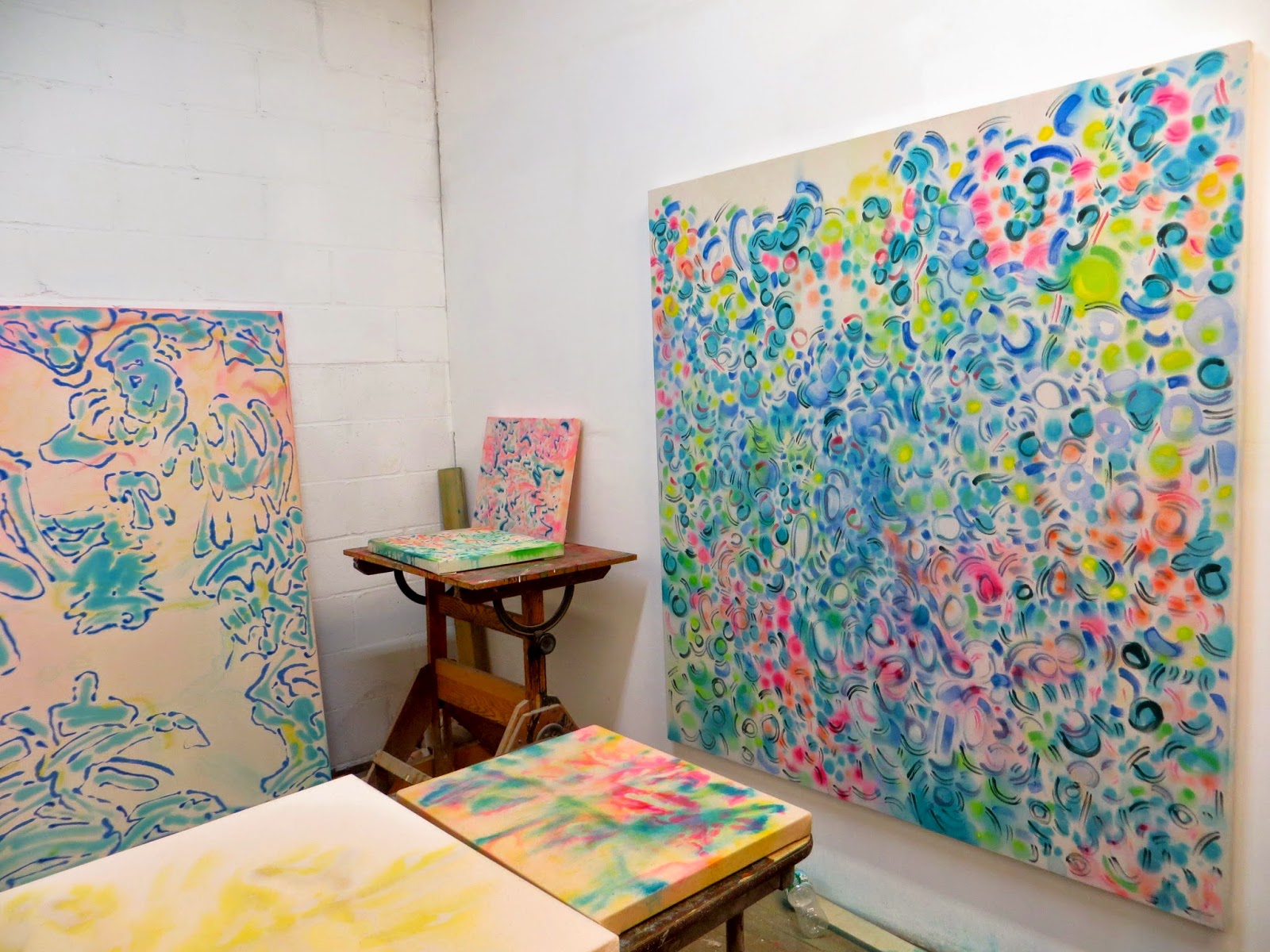 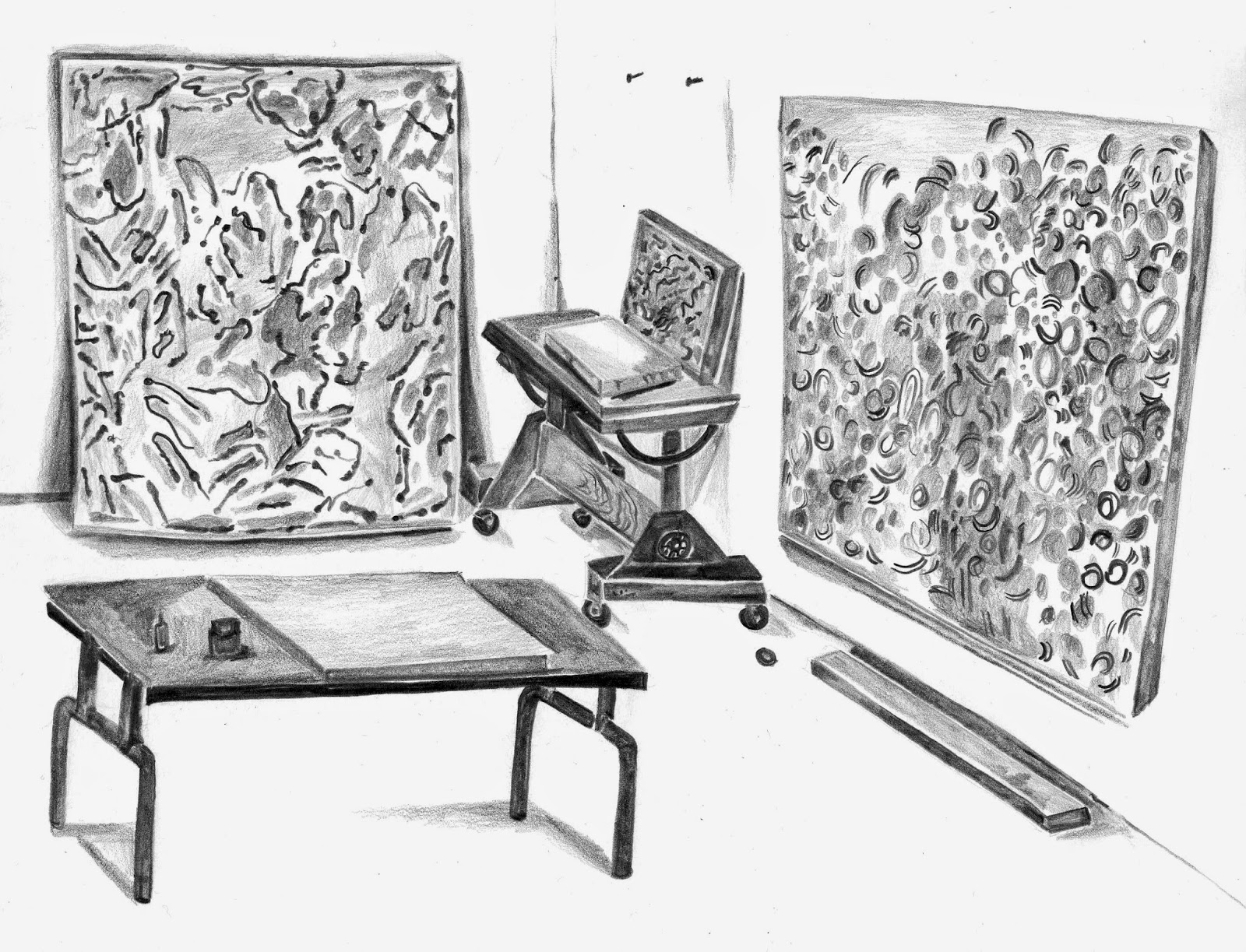 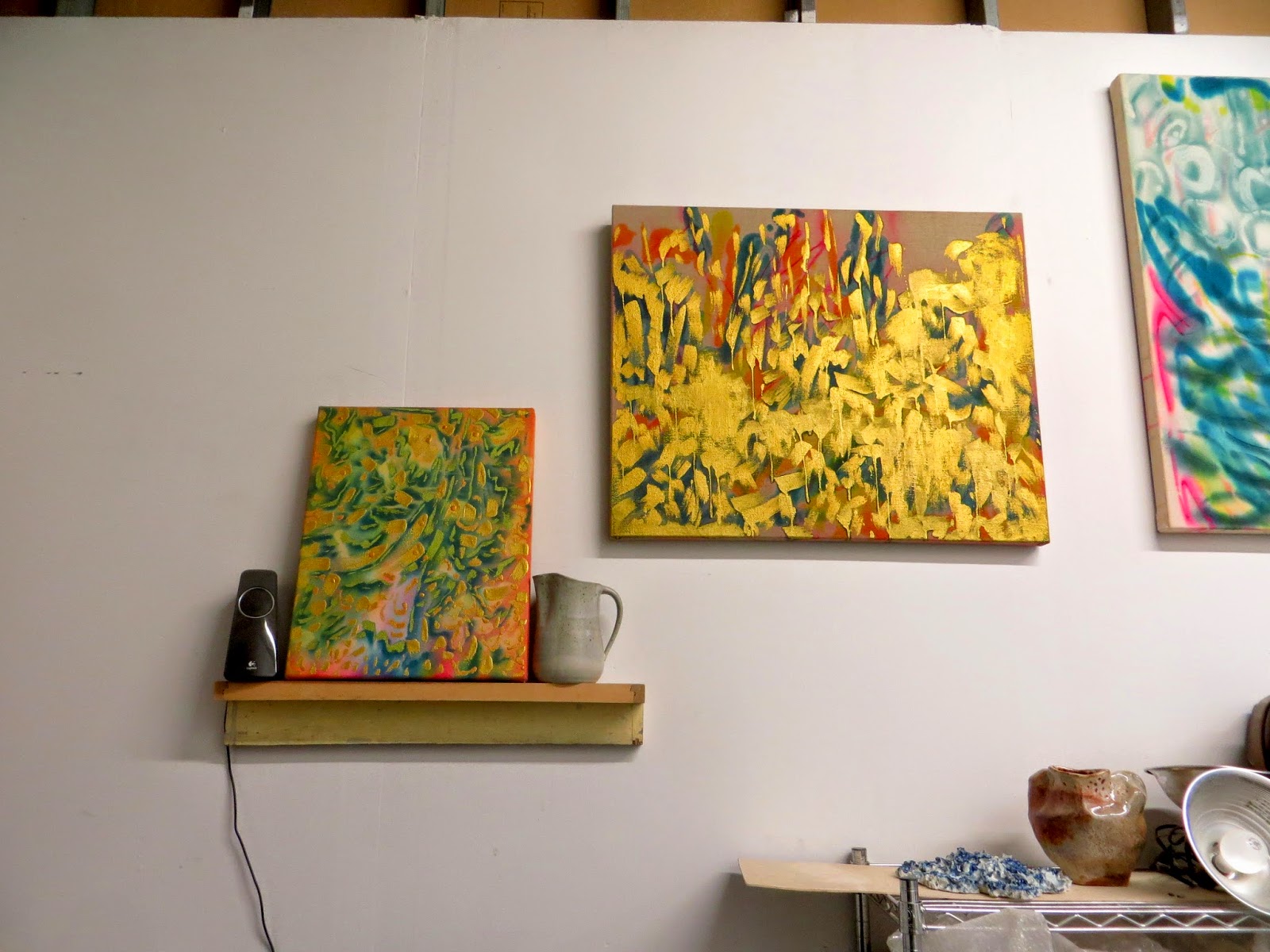 Like much good painting, McLaren's deceptively effortless process convinces the viewer that the cool and composed serenity of the canvas comes from no more then a few moments of deliberation. In actuality it is a collaboration of many thoughtful moments, pure pigment stains and perfectly timed drying sessions that eventually lead to her paintings' satisfying end results. This is where spending an evening drawing (and watching out of the corner of my eye) allows me the added benefit of changing my perception of how things are made. The saturated layers of color seem to dance on the surface while they are simultaneously being sucked deep into the canvases' textures. Pushing and pulling any sense of perspective into an endlessly hypnotizing cycle. McLaren's contemporary take on post-impressionism, as she breaks down objects to their basic shapes while heightening their colors, gives flora and fauna their deserved dues. A bush or a tree, as McLaren explained, are some of her inspirations. Much like those of my favorite century old french predecessors. 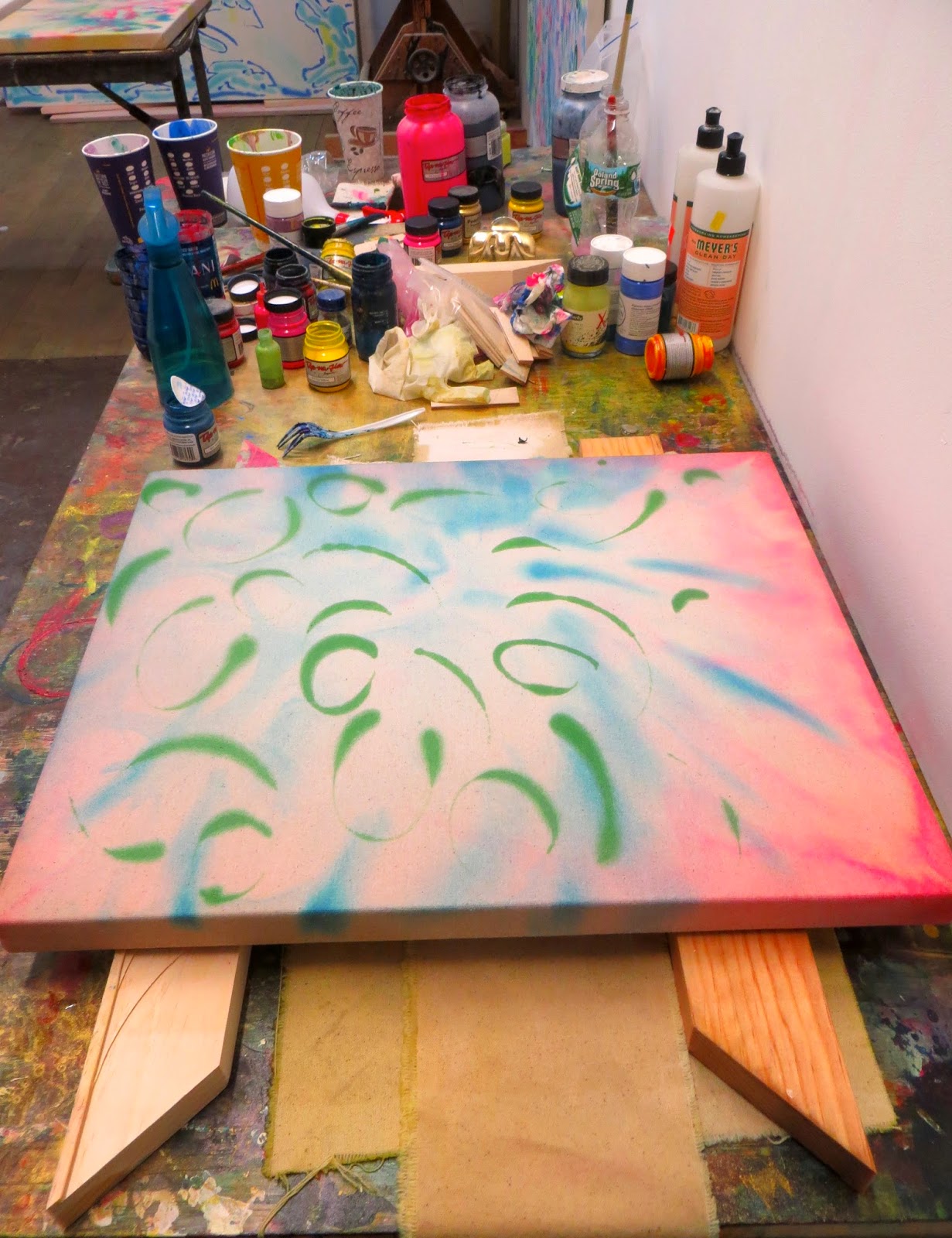 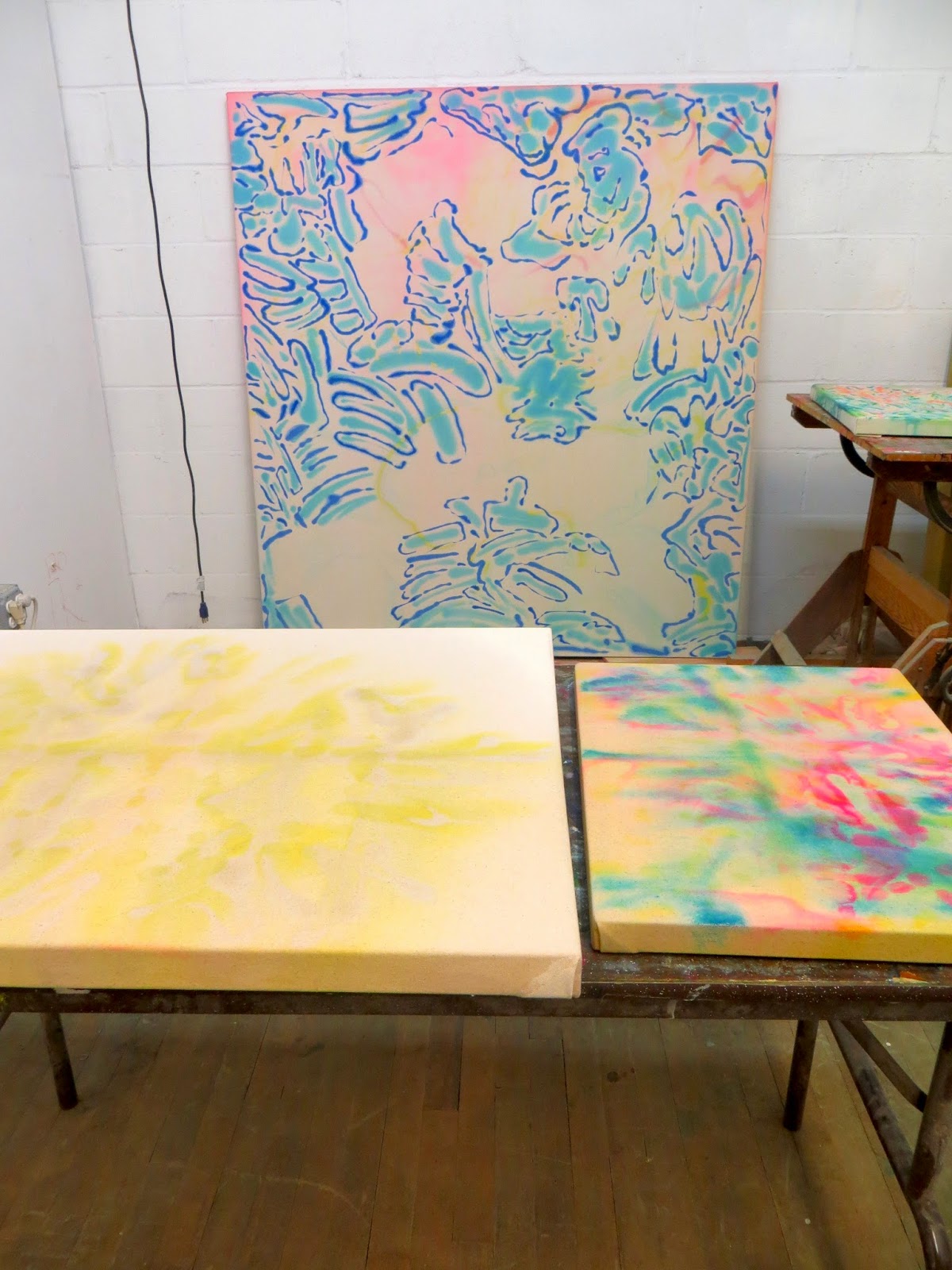 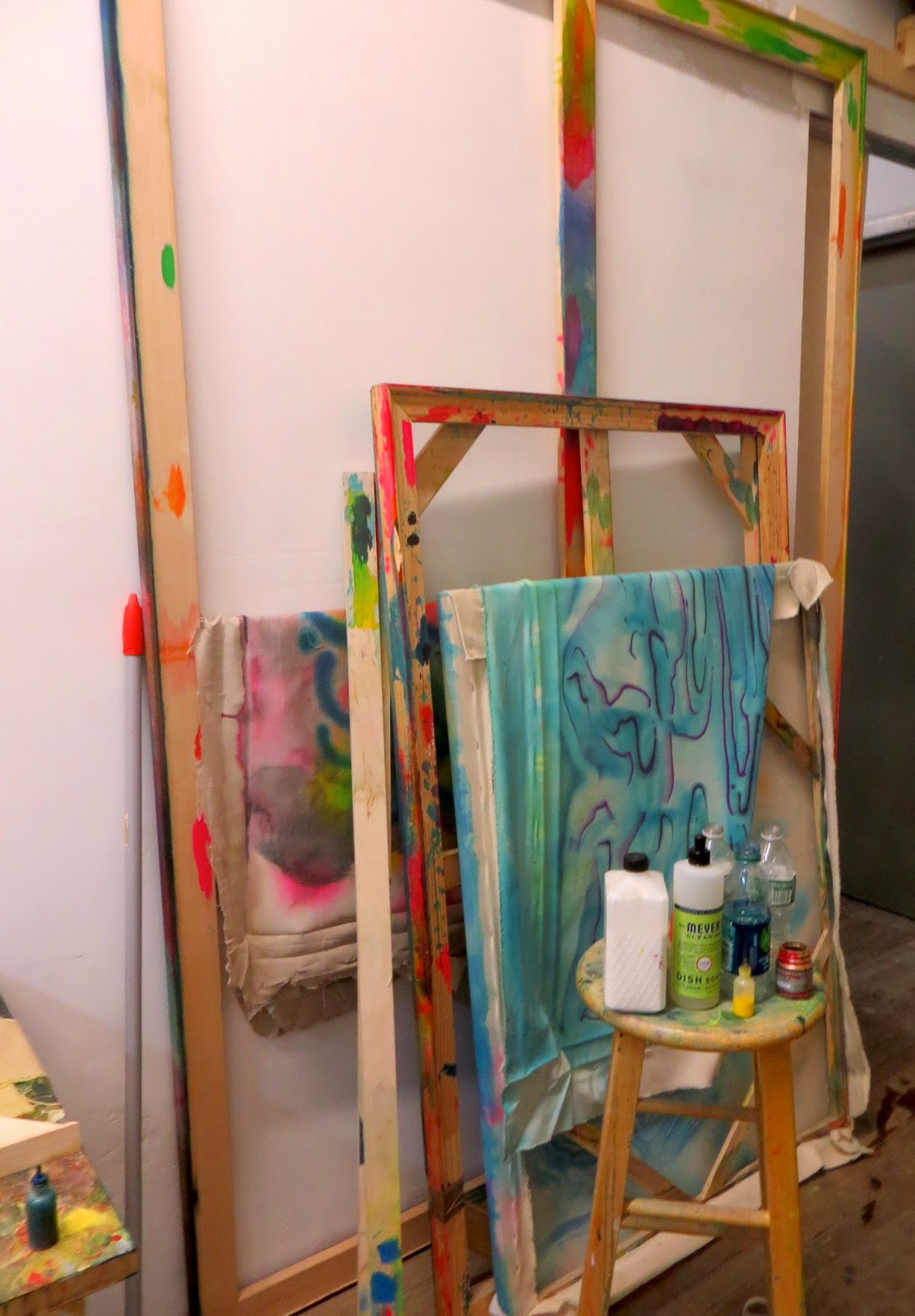 We broke halfway through our session for dinner at the noodle shop that is hidden half way up an industrial street near by the studio. I couldn't belief how satisfying a bowl of hand pulled noodles and stewed pork could be as it disintegrated in my mouth. While we ate we chatted on the ins and outs of the art world. McLaren's show, just weeks away, didn't seem to disrupt her calm disposition a bit as we sipped our tea and finished up our studio visit a few hours later. I look forward to revisiting these paintings (and the ceramics that will be joining them) at the end of the week. To see more of McLaren's work go here http://sairamclaren.com/

Posted by Maria Calandra at Monday, January 05, 2015 No comments: