This really gratifying thing happens during my visits sometimes: the artists divulge stories, almost in a half-conscious state as they are working on their art (and I am working to keep my pencils and listening skills sharp), that I have heard before in other studios. I have a clear yet dreamlike memory of visiting EJ Hauser's space at the beginning of my drawing adventures and hearing her inspiriting tale of meeting Mira Dancy and Michael Berryhill at Idylwild in California back in 2006. She told me how the three of them so quickly grooved together and have continued to groove since. During my visit with Berryhill several years ago and during my recent visit with Mira Dancy, they both unknowingly told me that very same story. If there are six degrees of separation in the world, then in the art world there may only be two. These structural relationships that I get the privilege of knowing the ins and outs of — from mentors to allies to artistic playmates — act like the glue for my growing collection of histories. Not to sound too Pollyanna, but these interactions are the real deal, not just internet bullshit. It feels good to be compiling them. 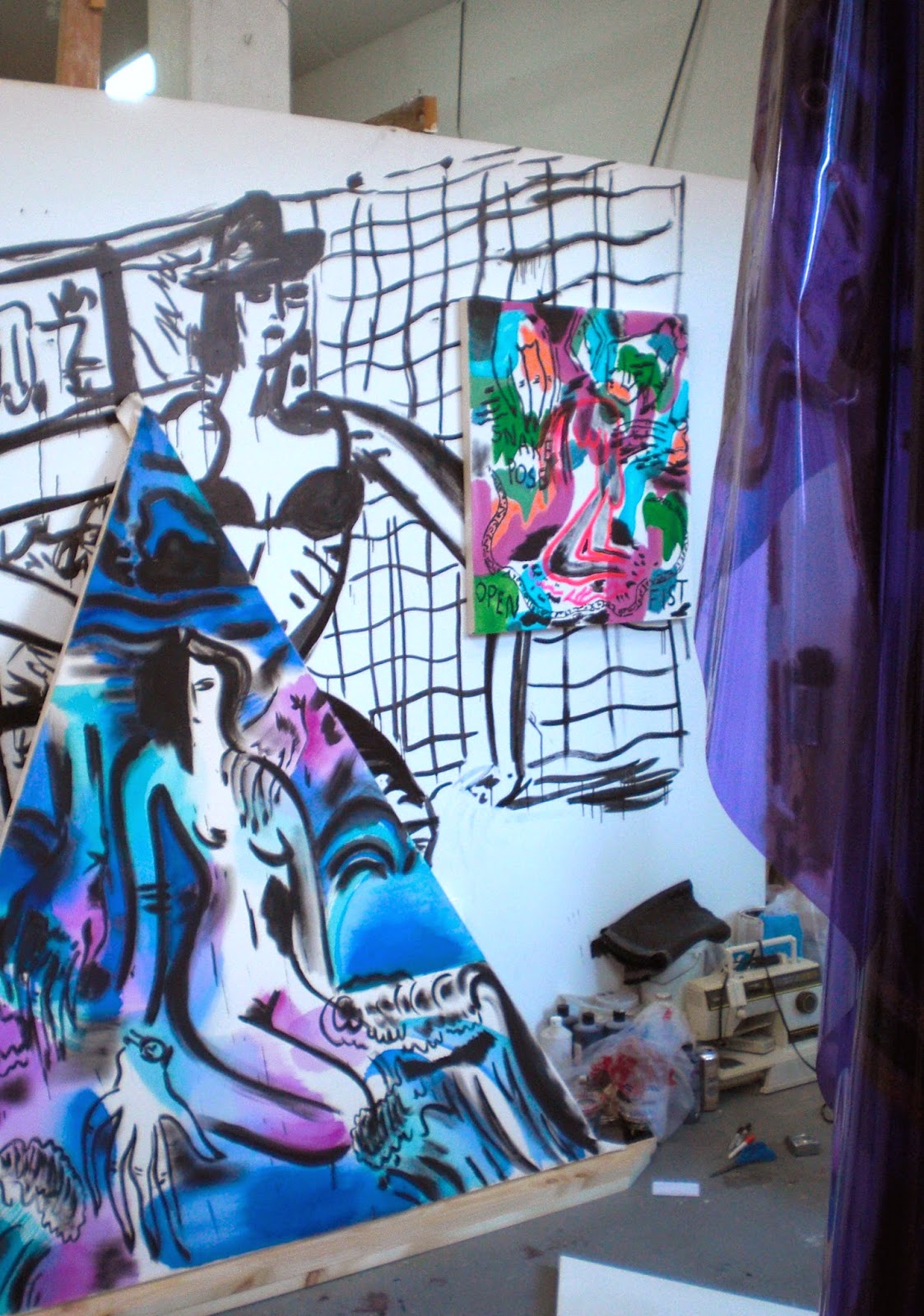 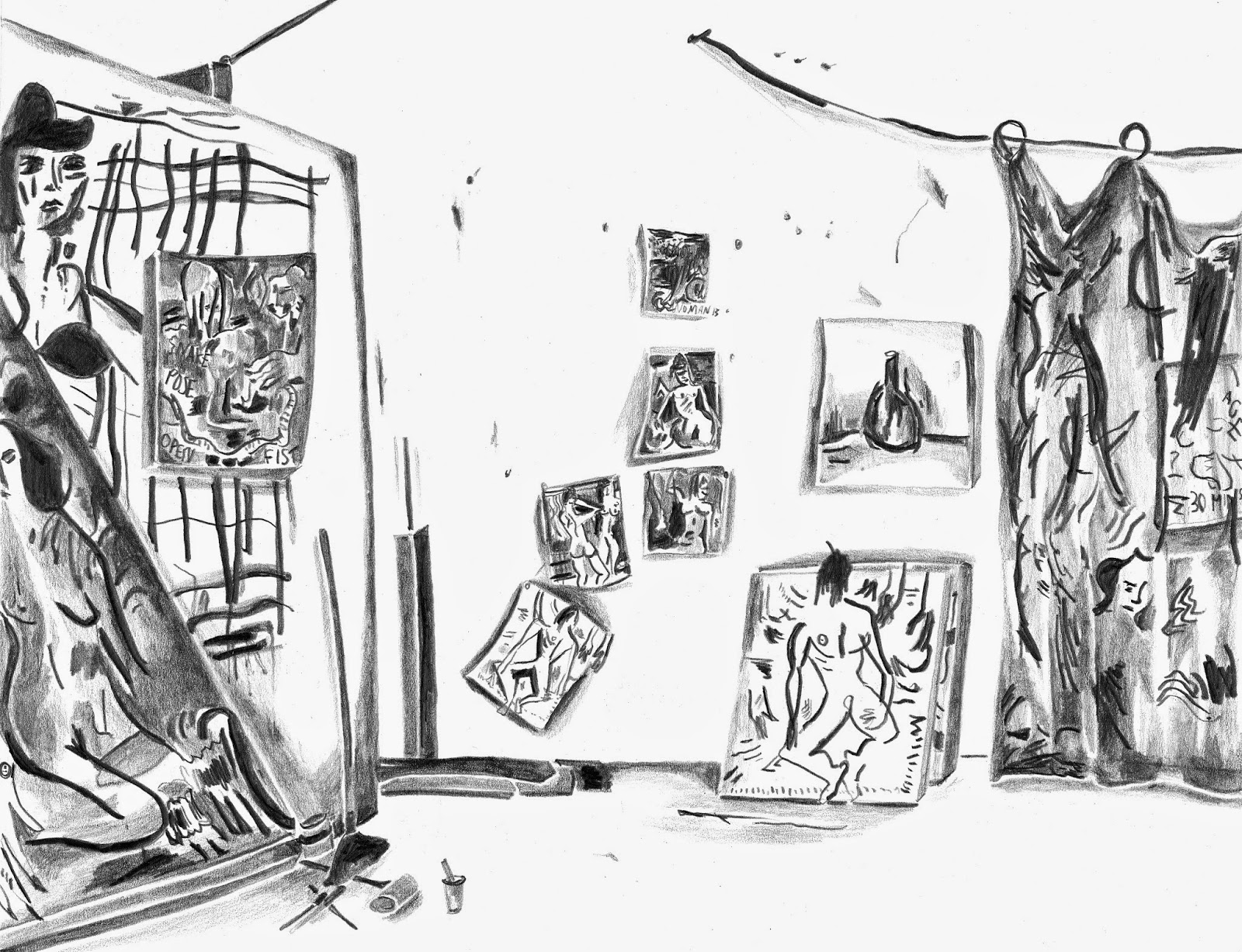 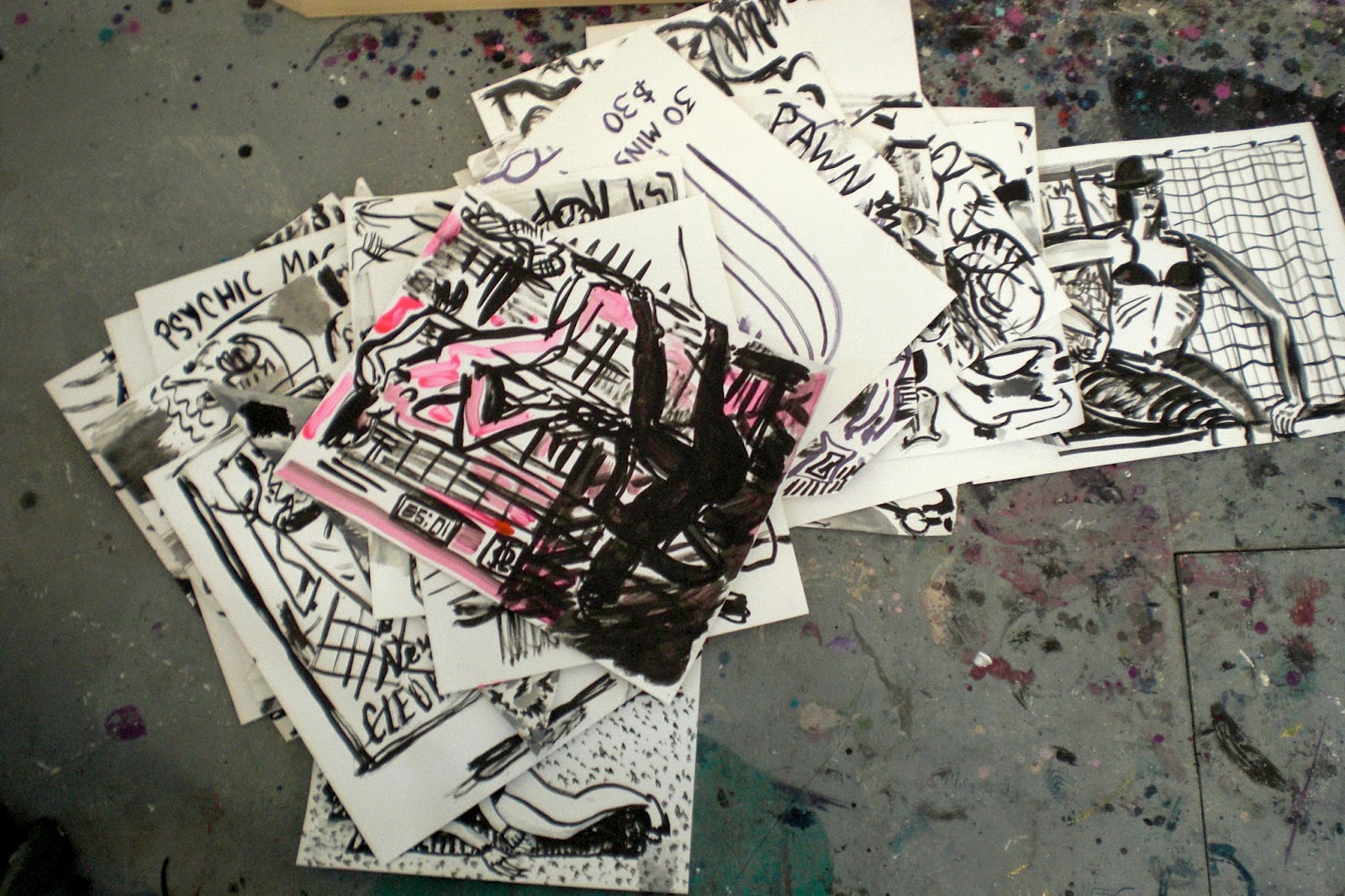 Dancy's studio was as energized and electric as I expected it to be. The juxtaposition of paintings, drawings on the walls, curtains, and paper, made for a really rich landscape. A new body of work was brewing that made the nude female figure its constant, a common theme for Mira. This is also a common subject historically, but most often painted from the alien male perspective. From Dancy's perspective, I could feel the forms' freedom, and with that, my freedom to build it's narrative. Maybe in this story I'll imagine the figure as being me, washed over in turquoise or hiding behind a sultry black hat or posed cross legged and vibrating in 3-D. Dancy first draws her figures — often combined with text — with deep black paints, later hitting the surface with saturations of hot colors. The effect is reminiscent of how a city shop grabs its clients attention with flashing signs and sharpie-drawn neon poster boards. I could smell perfume, nail salon acetate, and incense as Dancy explained the influences that the different storefronts she passes by on a daily basis have had on her. She told me how the mysterious signage and over all bizarre vibe of these places is beginning to play a role in the work she is making for a solo show that opens next January at Night Gallery in LA. Piles of papers strewn around on the floor seemed to be acting like the storyboards for the exhibition's intriguing plot. I can only hope that by next January I am visiting LA. 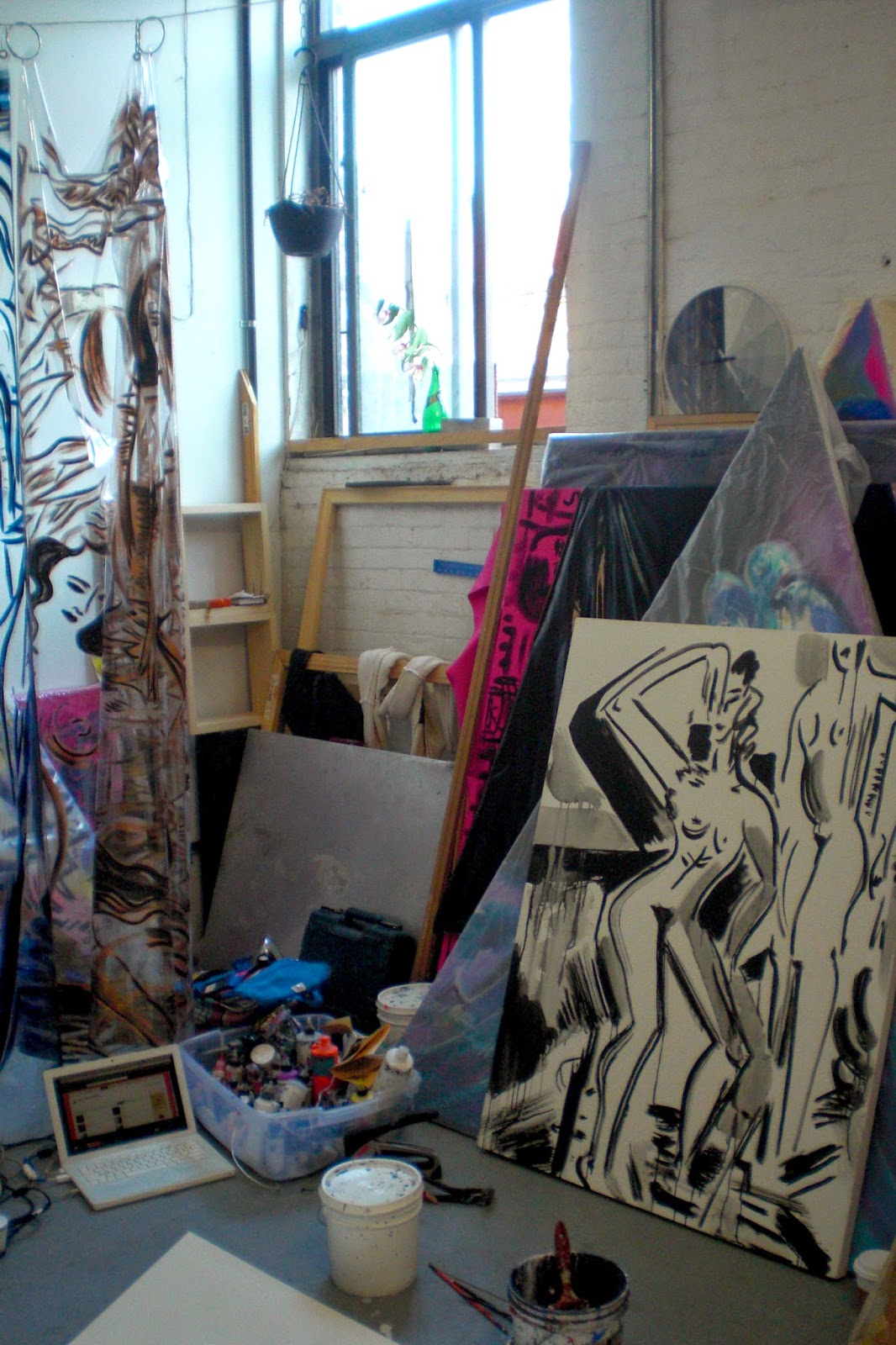 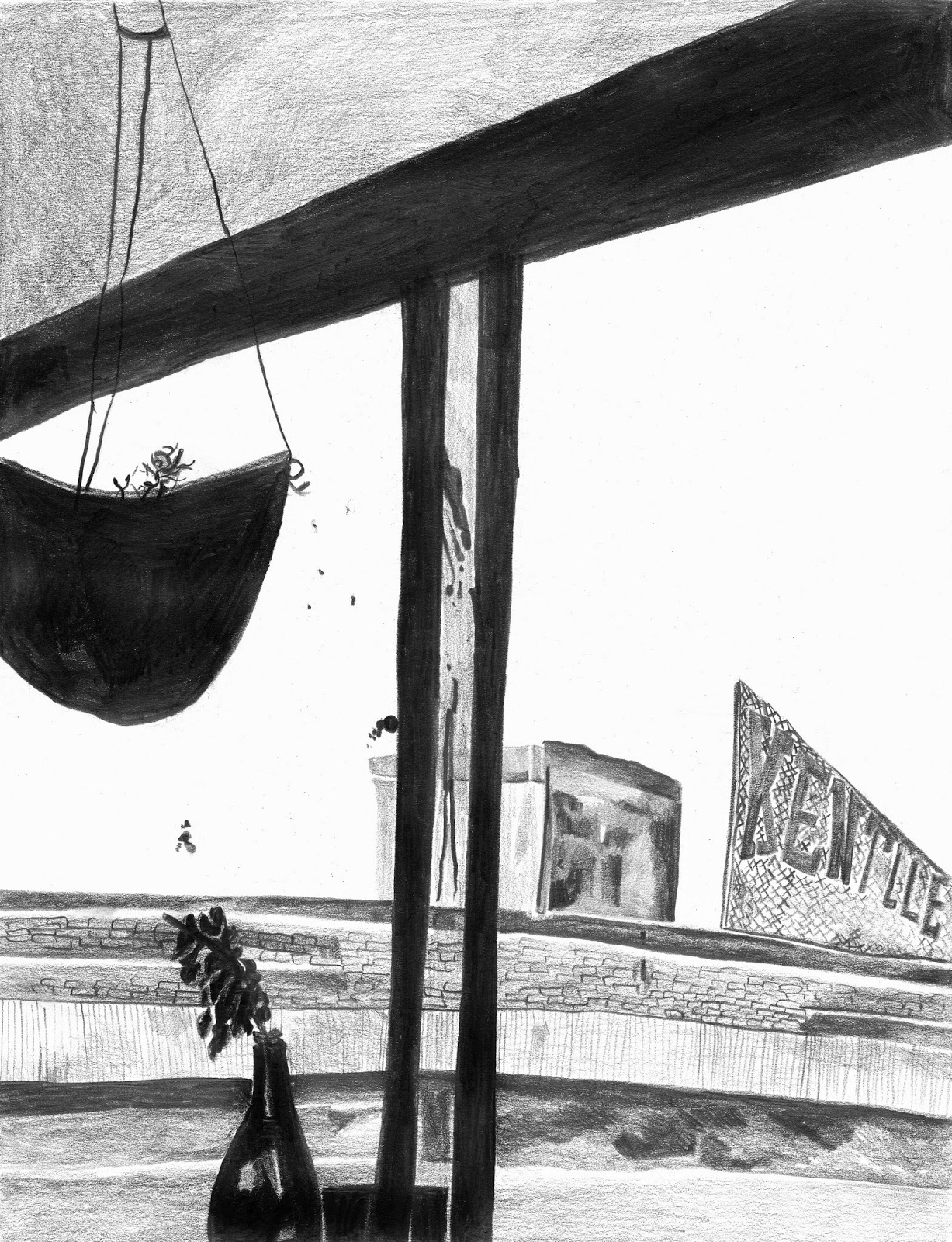 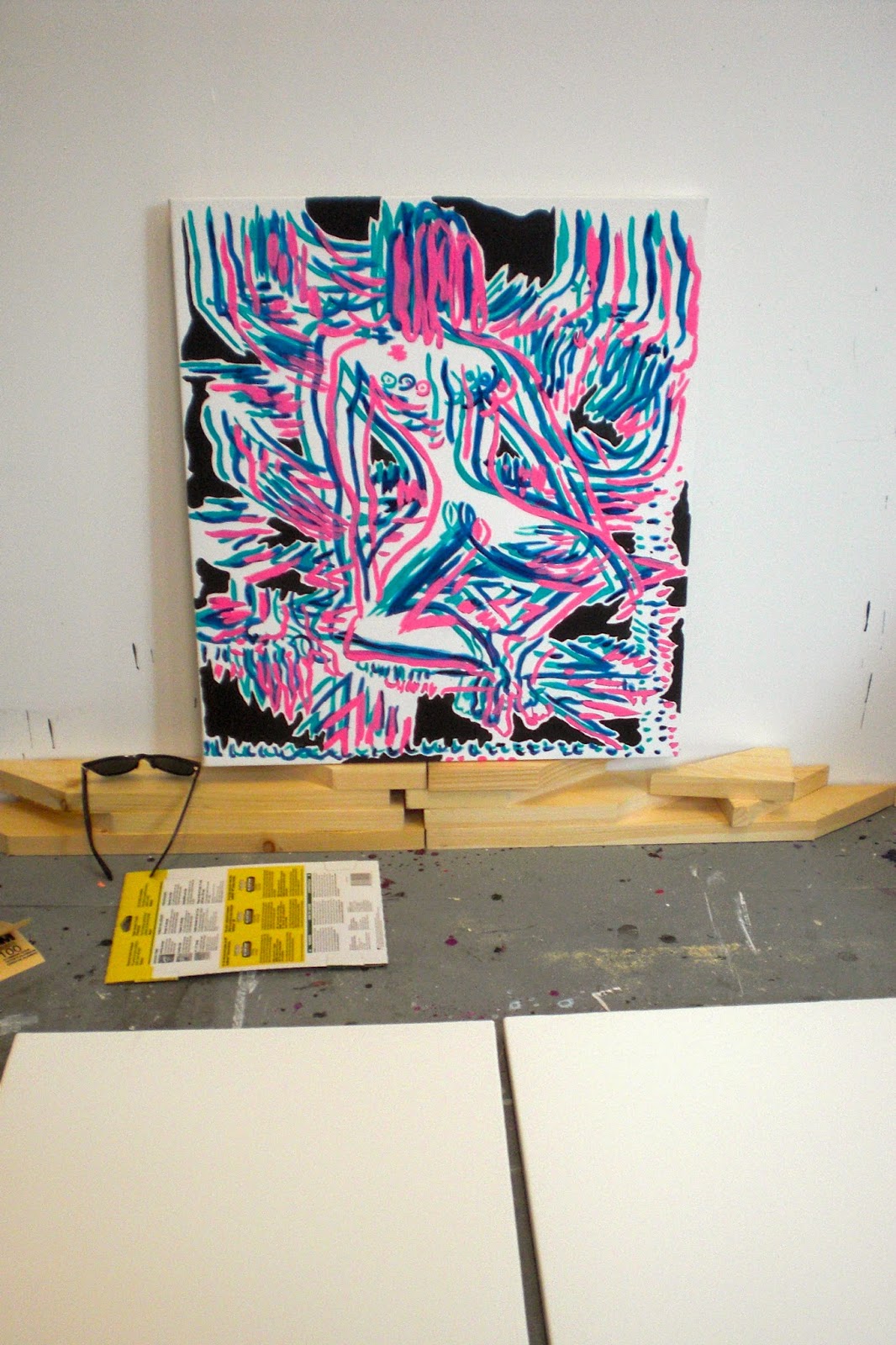 A few hours into the visit, Dancy threw up a video that she had made of an undulating ocean overlaid with the sound of her own smooth voice speaking stream of consciousness text. The video washed over the images on the wall like a final binding transparent brushstroke. The hypnotic and poetic sounds put me in a kind of trance while we winded down our studio day, full from a killer lunch break at Court Street Grocers and enriched conversations on art.  Dancy in currently in a show curated by the Suzanne Geiss Company at the Metropolitan Art Society in Beirut. And, look out for several group shows coming up this summer: at Zach Feuer in NYC ( curated by 247365) opening June 26th, at Cooper Cole in Toronto, and at David Shelton in Houston. This Fall Mira will also be collaborating with the amazing Sara Peters at Asya Geisberg Gallery. To see more of Dancy's work go here http://miradancy.net/