I recently traveled to Northern California and while I was there had the unique opportunity to do a studio visit with Bay Area artist Jovi Schnell. She lives and works in San Francisco and is presently teaching at the California College of the Arts, which she has been doing since 2004. In 2010 she completed her first public art commission in a new public plaza in the SoMa district of San Francisco and has another in the works for June of 2012 in a skate park between Mission & Valencia. This is so thrilling, installation art that will past the test of time. Her studio is located in the Mission in a great big brick building. Jovi's space, found at the end of a long hallway, is very attractive, with its high ceilings and vast skylight. I couldn't wait to get the opportunity to meet her and view her work in person. We had loads to talk about as I drew and she painted: what led her to a move back to Cali in 2004 after spending many years in NYC, the way the art world opperates in San Francisco, and what she draws her inspiration from. 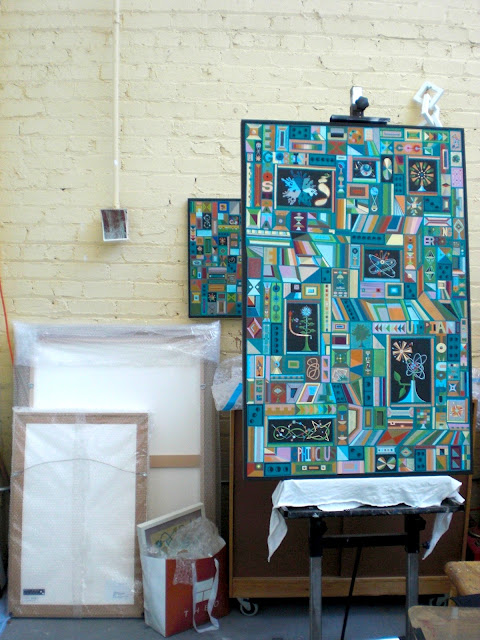 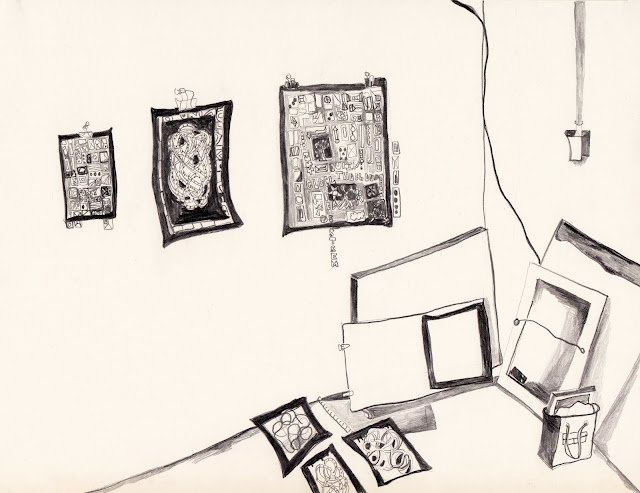 Jovi makes groups of paintings at a time and explained to me the processes for a couple different bodies of work. I was totally taken by these processes -- beautifully tangled systems that quite literally allow the throw of the dice to determine which way the paintings go. First she pointed out one of her studio walls tacked with papers holding lists of phrases and words. Jovi names this collection her "Brain Dump," where she drops language she has collided with. The next step in Jovi's process is to number the list and come to a particular word on the list by throwing a multi-sided dice. Jovi then finds the colors for her paintings by entering the words the dice has chosen in a search engine that brings up a palette corresponding to each word. When starting the painting, she again throws the dice to determine when and where to use each color from the palette, when to use a particular image, or how to build the blocks that form her paintings' grid-like layout. I found Jovi's application of chance to be extremely poetic; playing out a game that uses paint, color, and composition as its pieces. What fantastic results this game gives way to. The colors are perfectly harmonious and the movement of one square or cubby-hole to the next seems nothing less than meant to be. 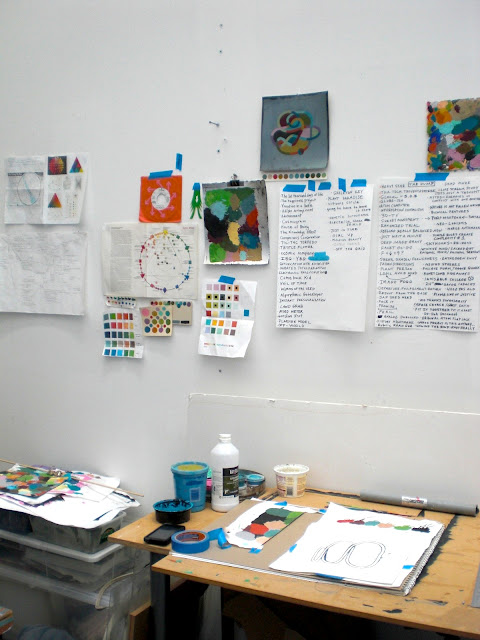 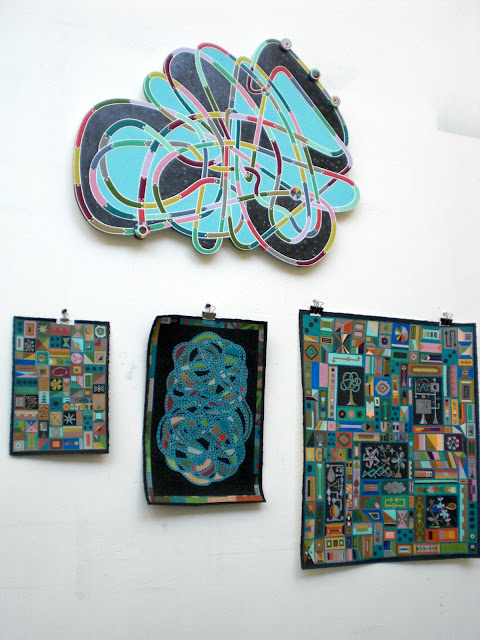 Jovi does use a few constants in her paintings. It could be a blue she can't get away from or a lexicon of images that appear in the painting's many boxes. One image I was drawn to in particular she called her "Breath Star," which she explained originated from "Viscous Fingering," a scientific study she first came across in a series of books by Philip Ball called Nature's Patterns: A Tapestry in Three Parts, which includes Branches, Flow & Shapes. She makes the star by breathing down on the paint in its center. Jovi shared lots of information similar to this with me. The conversation was so rich. She is very in tune with what is important to her and what she channels through to use symbolically in her work, be it a tree viewed from both sides, a galaxy telling us where we are at a given point in time, or the simple beauty of chance. 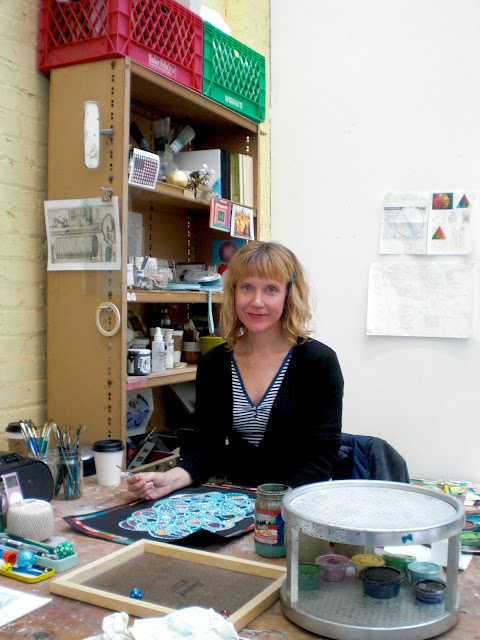 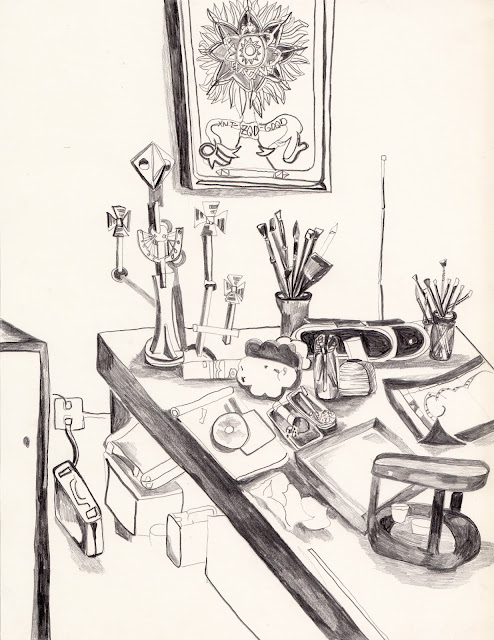 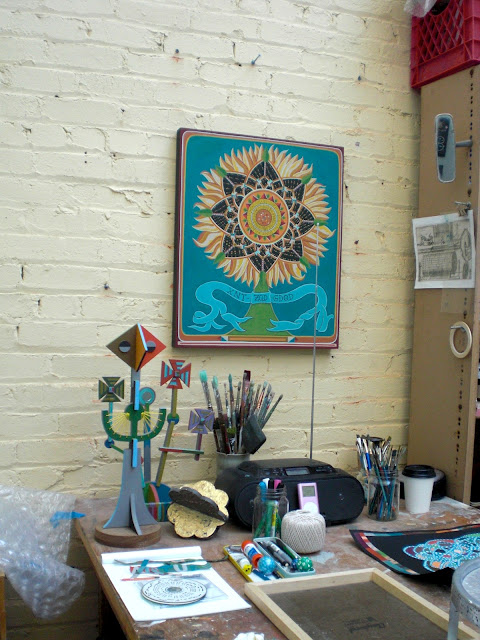 Another current body of work incorporates a system that allows movement to inspire the chance. Jovi paints a string and then slowly lets it drop to a piece of paper, later transfering this mark to a black ground. She continues to paint on this "knot," leaving a maze of color in the center of the black paper like a concise reflection on movement. She worked on one of these "knot" paintings while I was there. I was captivated by the sound of the dice being thrown in the background as she chose the colors for it. 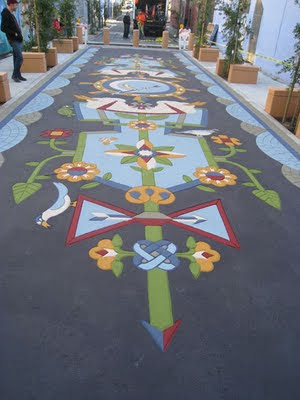 Above is her public art piece entitled  Evolves the Luminous Flora
The time flew by in Jovi's studio. I wasn't ready to leave, but the last days of travel were beckoning me to see the ocean one last time. I have barely scratched the surface when it comes to talking about her work. She spoke a lot about her work dealing with locating oneself and being present. I took away with me these thoughts and hope to apply them to my own way of living. Please check out more of Jovi at http://www.jovischnell.com/_new2/gallery1.php. And also look at a video on her public art piece here http://www.youtube.com/watch?v=0ctqi7M3gZA. 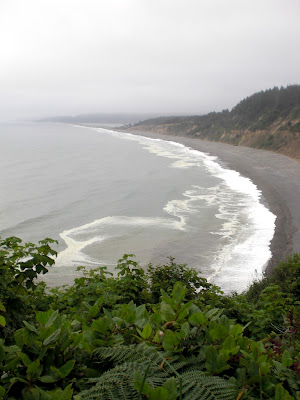