At the tail end of a trip to Northern and Southern California, filled with views from extreme heights, close encounters with one of a kind species, and a lot of amazing Mexican food, I saved a visit to Zach Harris' studio. Five years ago — after a 13 year stint — Harris left NYC and returned to his native Los Angeles. I met him when he was still living on the East Coast through my husband who in turn had met him in a dorm room in Santa Cruz some 20 years ago. Their story of artist friendship is quite tender and I had the pleasure of hearing it from both sides as I drew and they ruminated on their early years in New York. Harris continued on to tell me about his initial adventures living in the city, from inhabiting abandoned spaces to feeding exotic animals, putting in perspective what it can sometimes take in our 20's to make it in our 30's. He was very dedicated to the art of living off of nothing in order to pursue the art of painting — some of his experiences as extraordinary as the work that has evolved since. 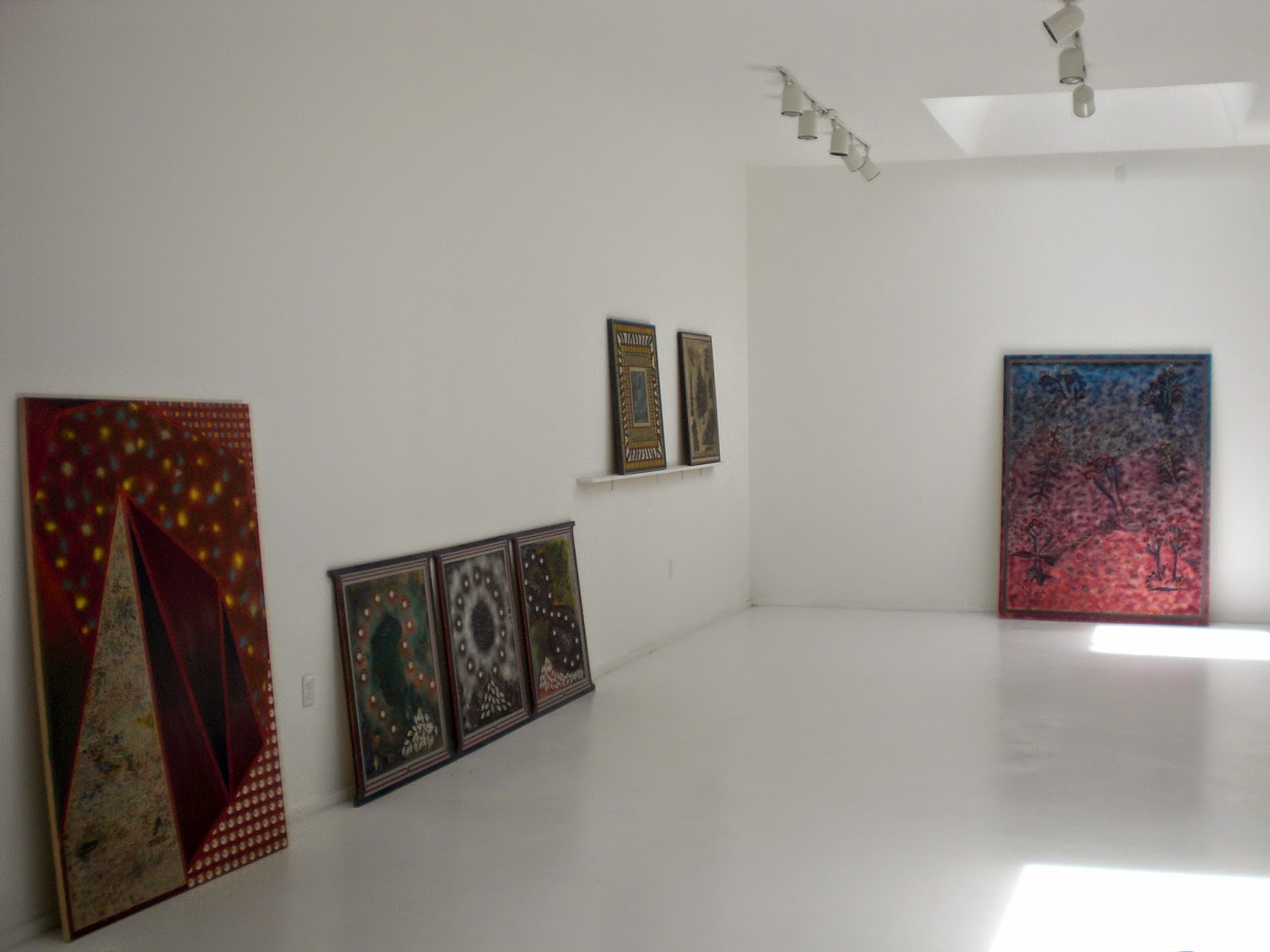 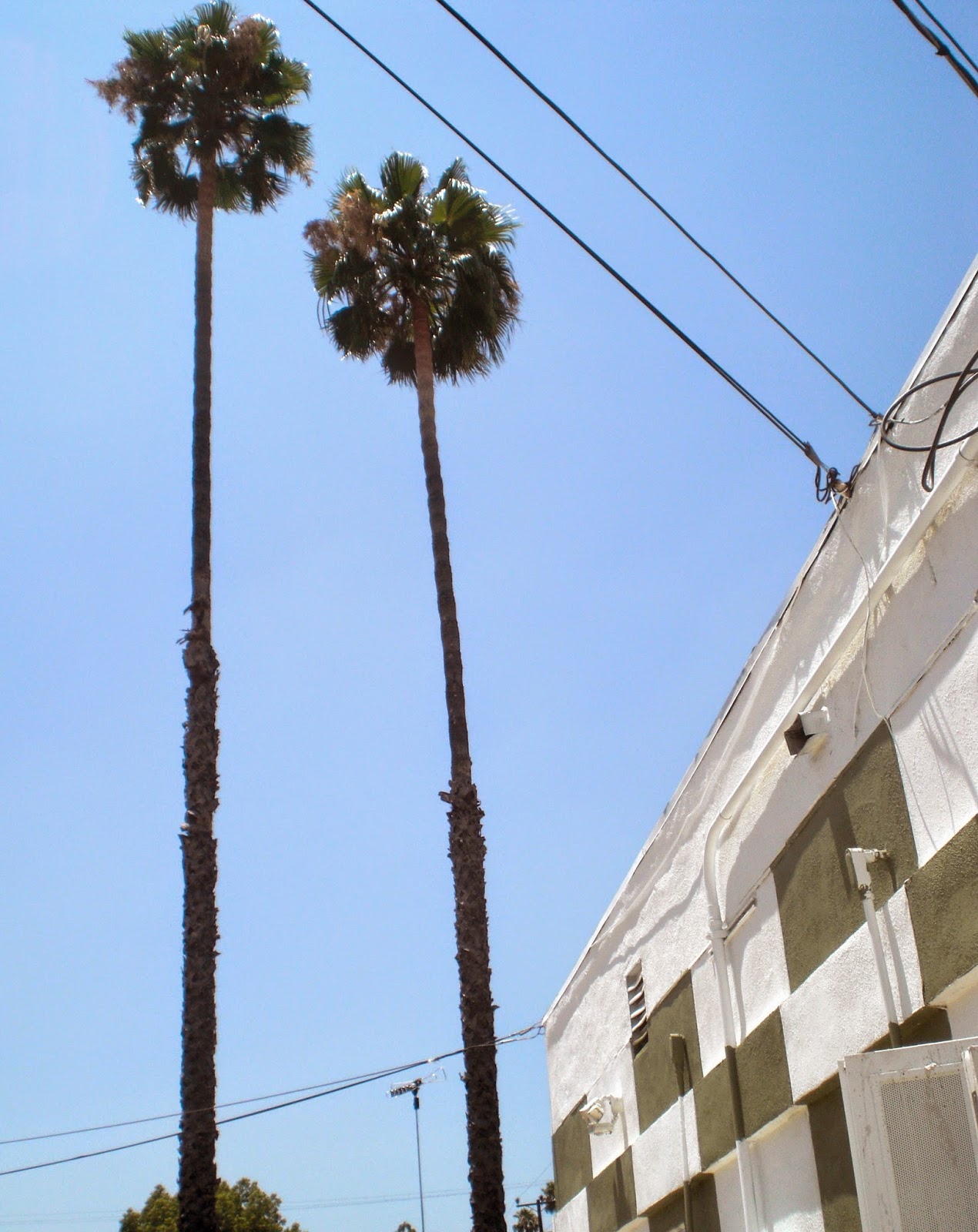 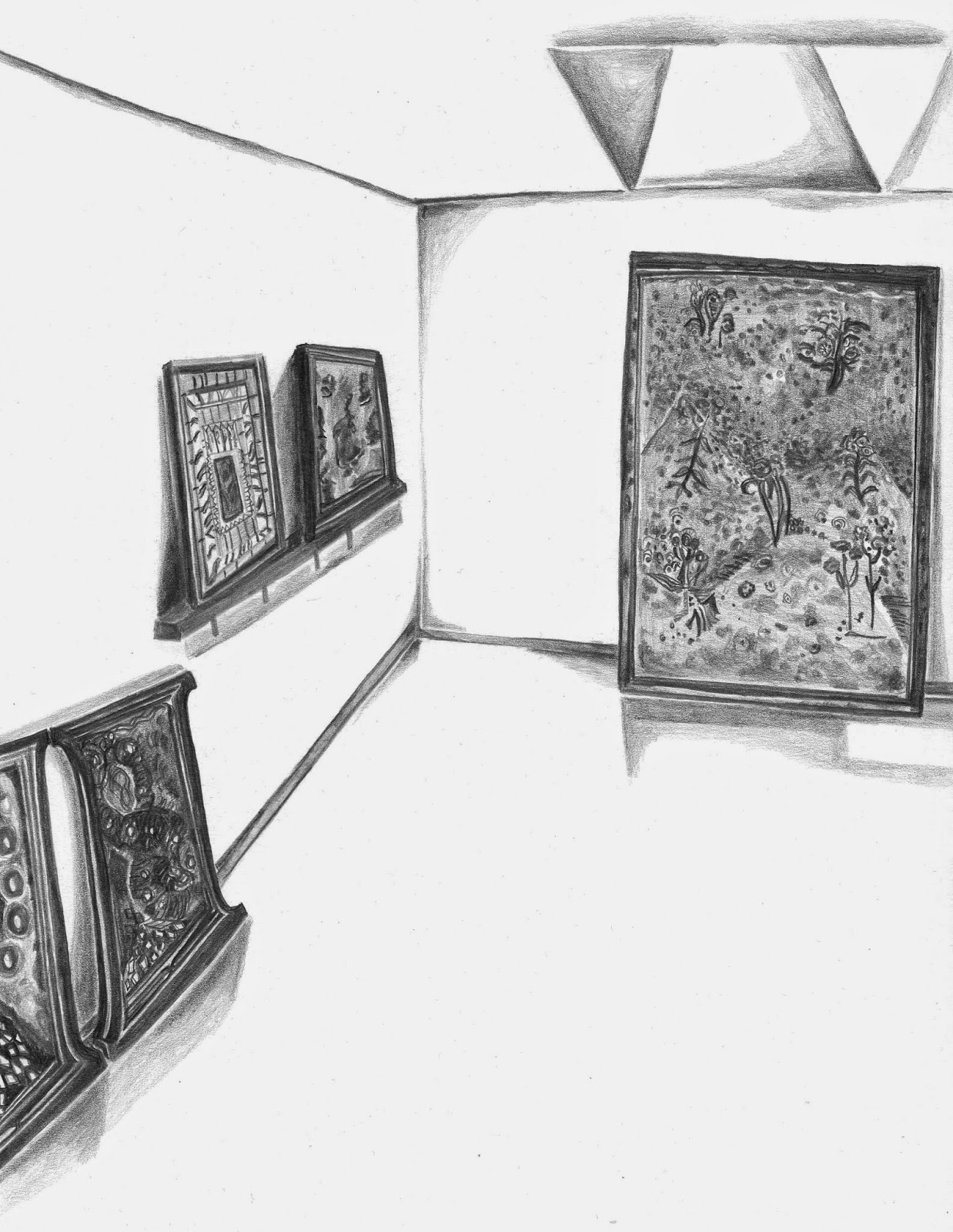 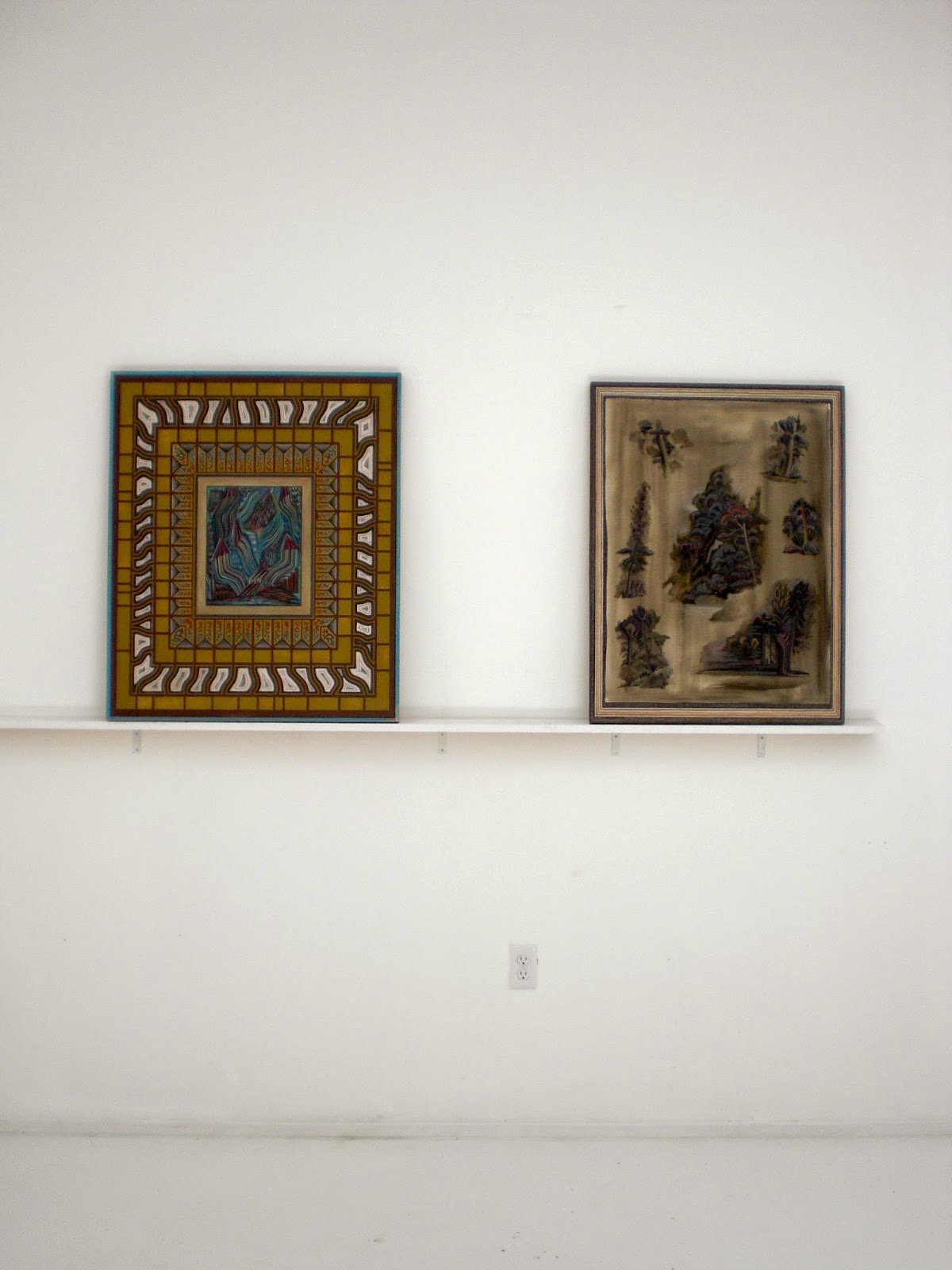 The detailed and dedicated approach to Harris' way of painting, with the meditative time he spends looking at not only his own work in its process, but also the organic world around him, plays a significant role in its outcome. While drawing, I meandered up trees and through psychedelic mountain ranges, resting in prismatic vegetation, before being pulled to the furthest regions of the canvases by hidden texts and intricately carved geometric ridges. I left this world for one filled with deep crimsons and the blues of a cloudless California sky. And, with his repetition of line and form that is often made vibratory with bands of color, I became hypnotized as I navigated his painted labyrinths. The text, acting like an artist's stream of consciousness and sometimes written so tiny you need a magnifying glass to read it, begs for a close encounter and operates like a narration for the visual trip that is experiencing the paintings. As the eye adjusts to the overall sensibility of a Zach Harris, thoughts of fauvism, medieval altarpieces, the Arts and Crafts movement, and the interiors of a Byzantine cathedral come to mind, cluing me in to the fact that Harris' studies aren't just of the natural world. Ultimately, it is how idiosyncratic these paintings are that causes me to be consumed by them.  He is taking the best of our surroundings' colors and textures and adding intensity and imagination — formulating an exquisite new way of seeing. 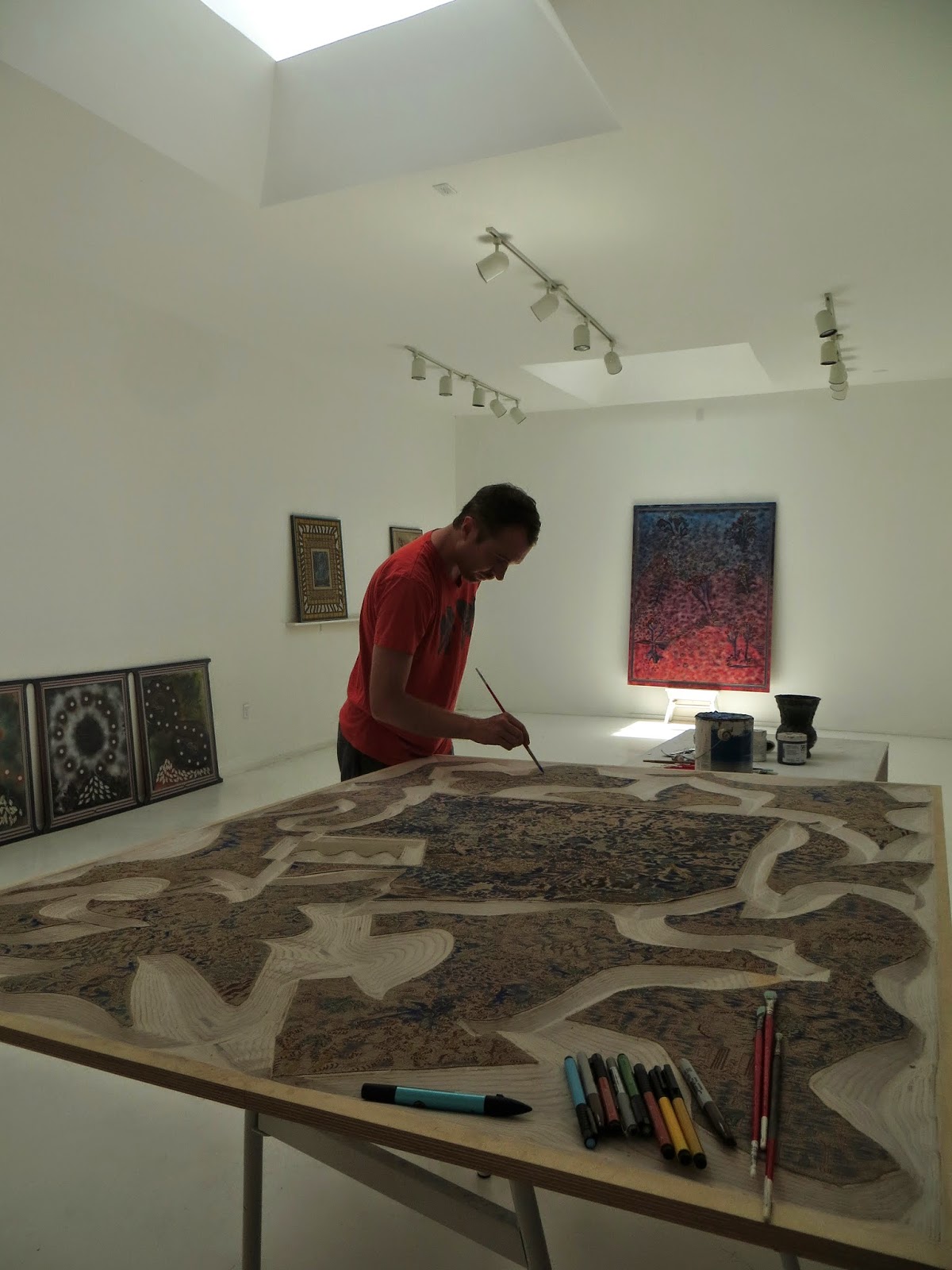 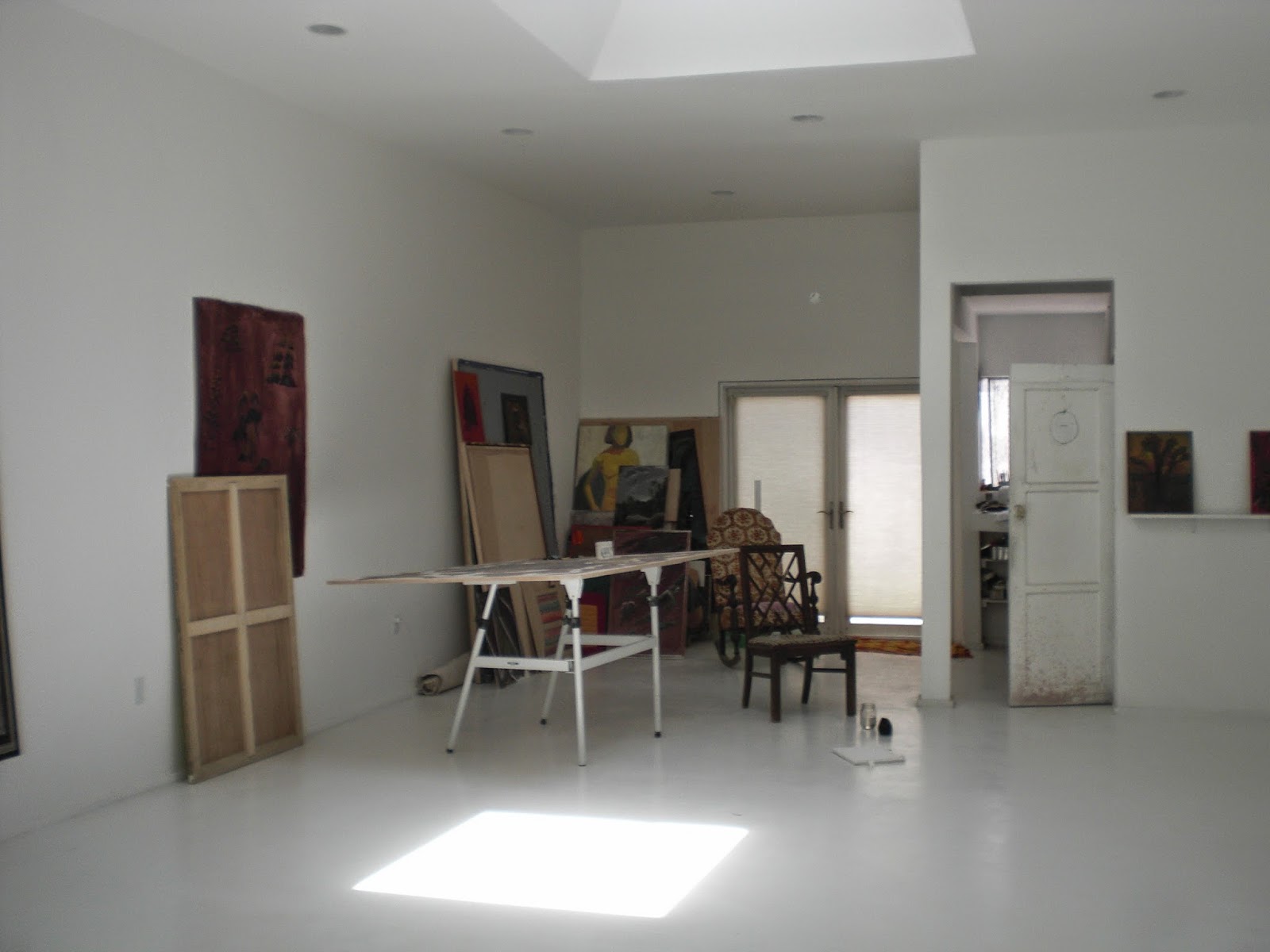 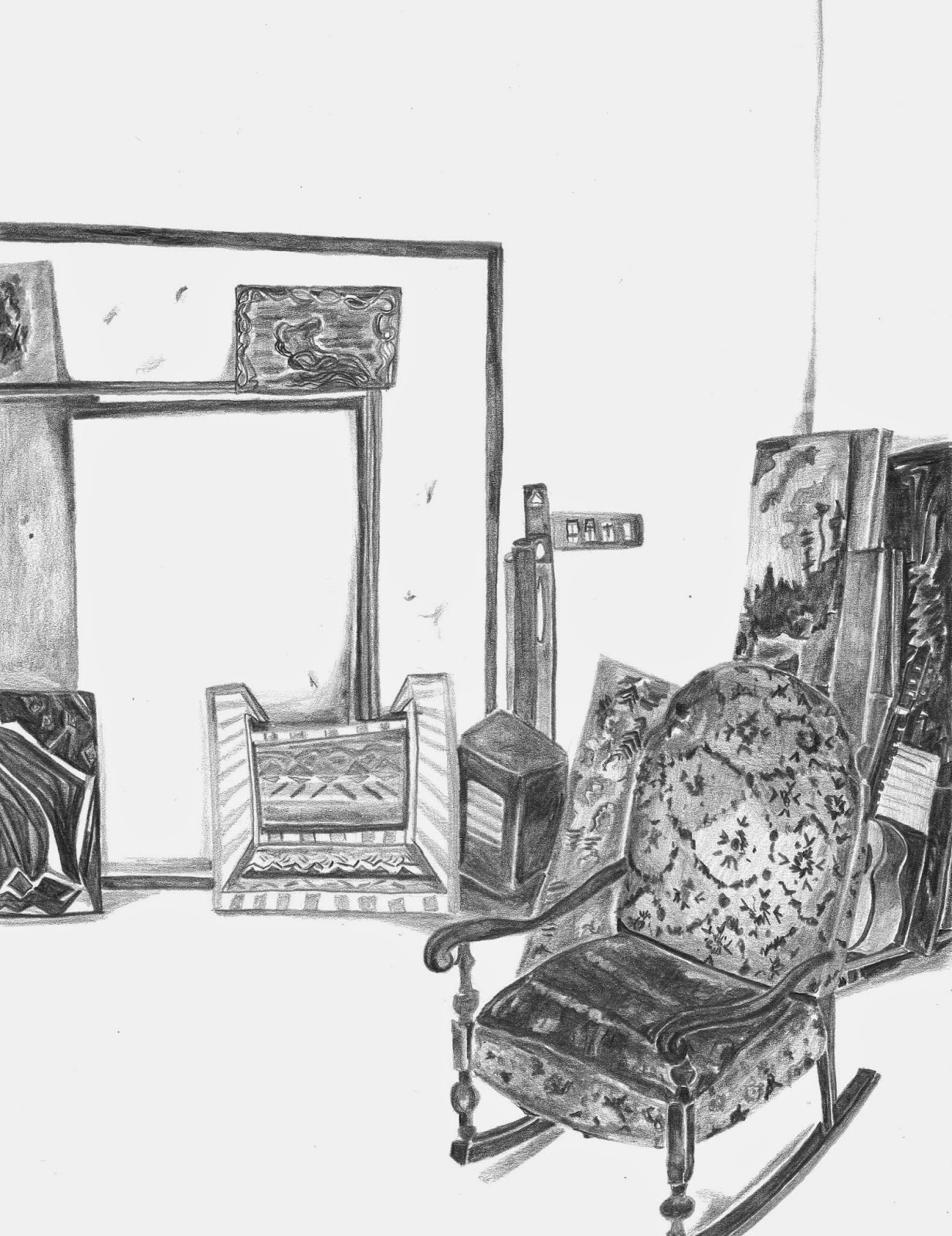 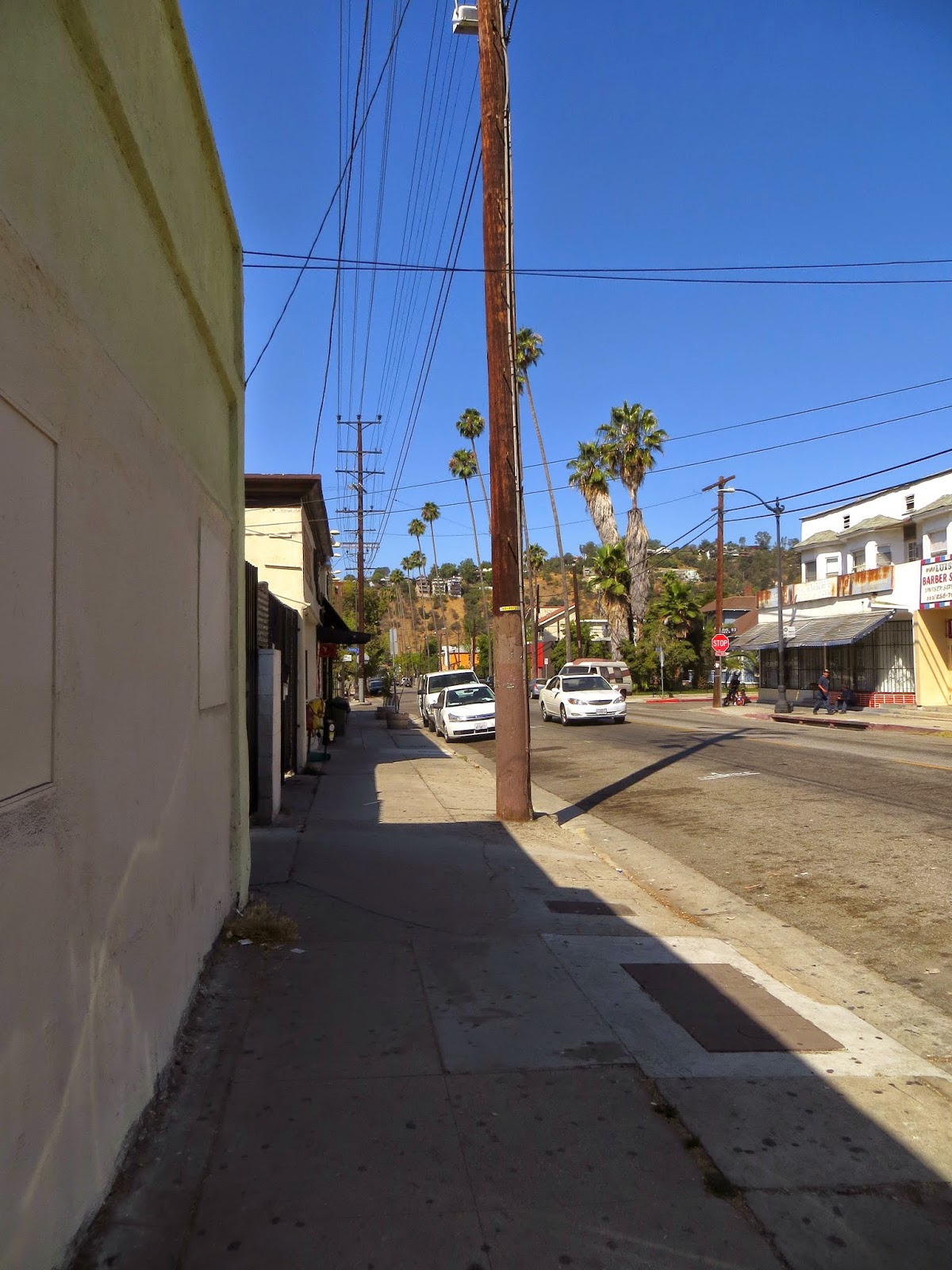 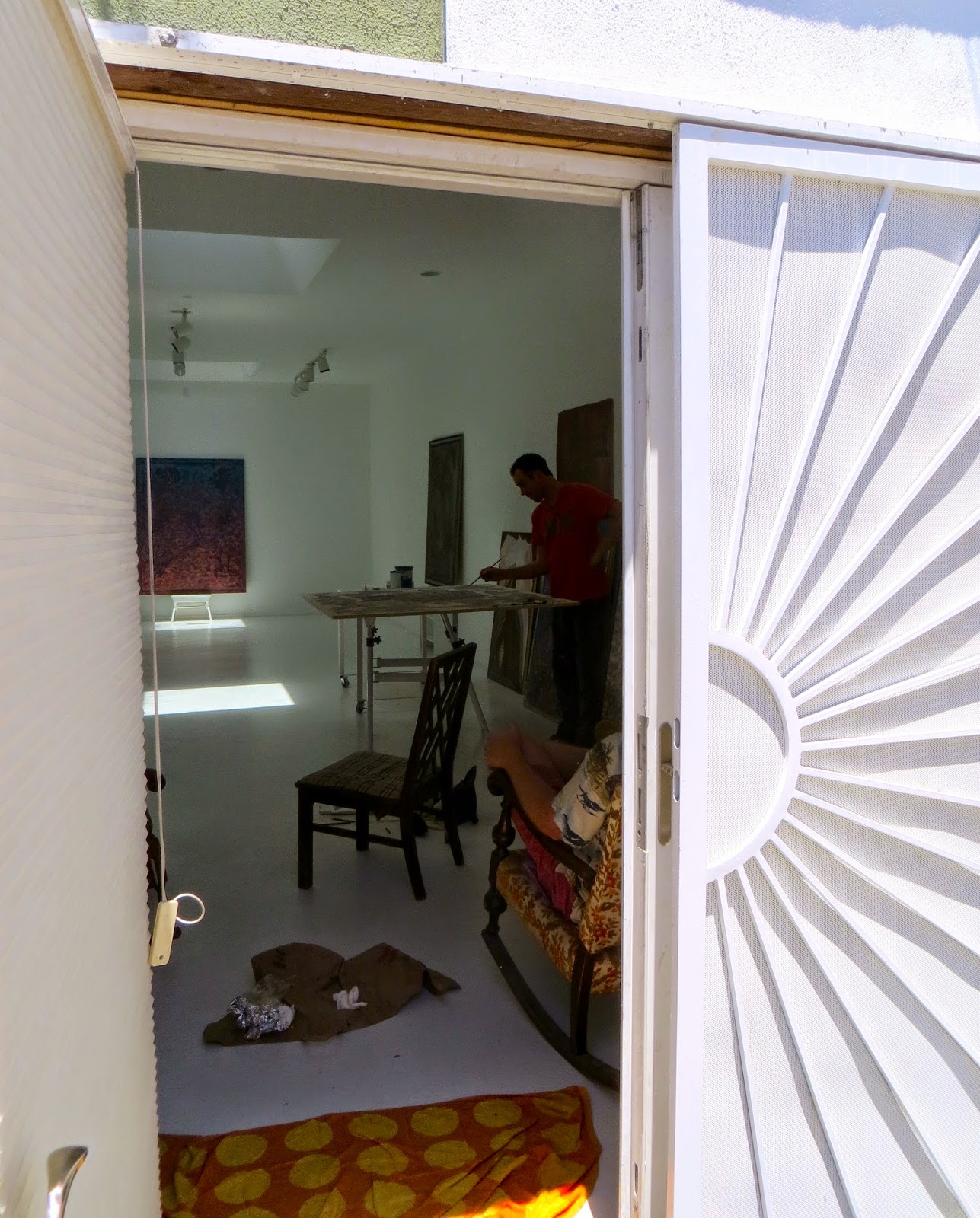 Along with drawing Harris' space and getting a glimpse of his life by way of his studio and home, he gave us a one of a kind tour of L.A. He introduced my husband and I to the unimaginably large cactus garden at the Huntington Library, showed us around L.A.'s Chinatown — deserted once more after a brief insurgence of galleries — and took us for a drive nearly straight up a mountain range just outside the seemingly endless city sprawl of L.A. on Highway 2 near Montrose. I couldn't think of a better way to get to know the West Coast's equivalent to NYC. Or a better artist to do it with. Harris will have a solo booth of new work with David Kordansky Gallery in Los Angeles at the upcoming FIAC art fair next spring. To see more of his work go here http://www.zachfeuer.com/artists/zach-harris/. 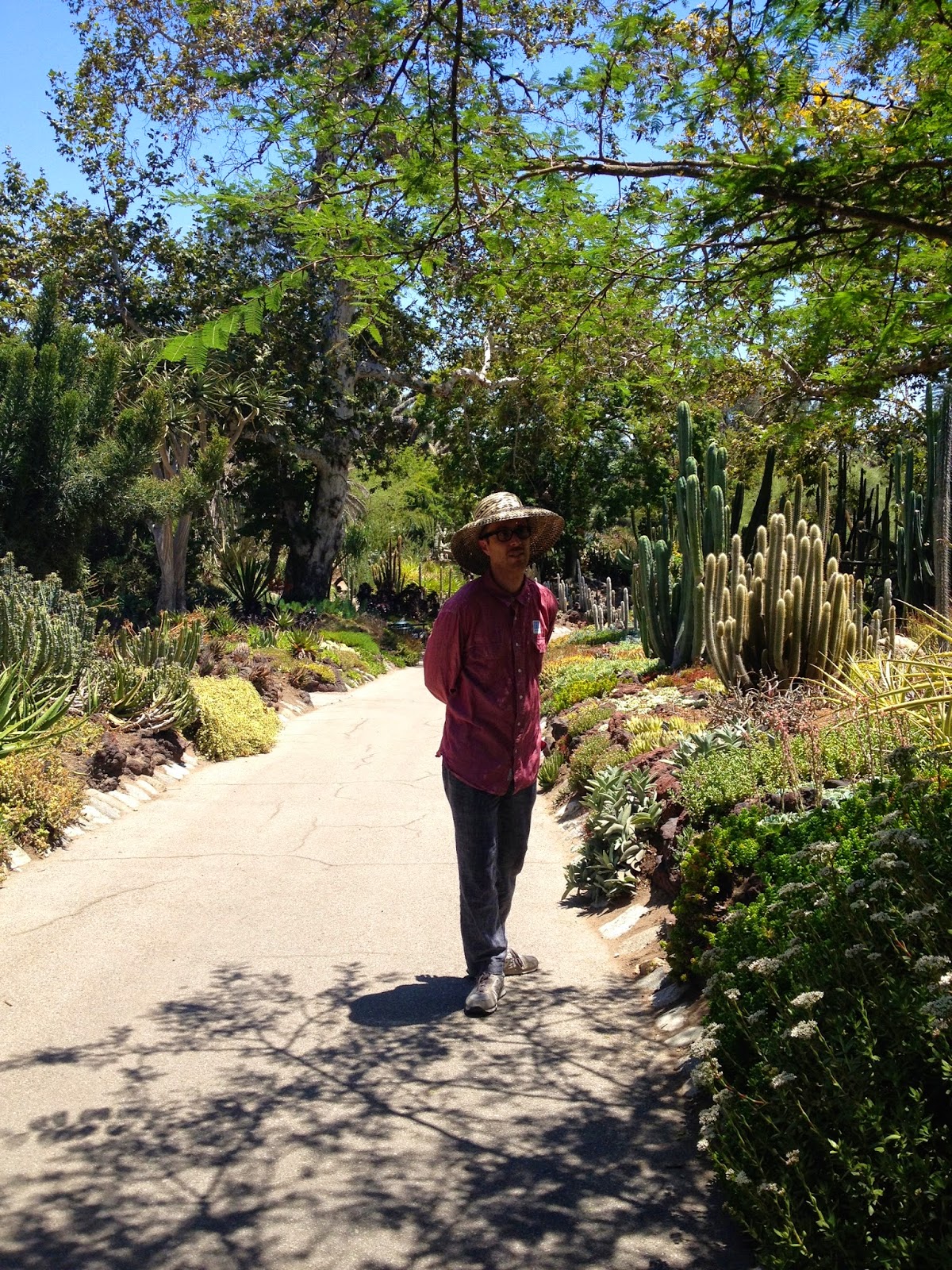