Yesterday I visited Ron Amstutz's studio in Long Island City. His work contains elements of performance, painting, photography, and video that come together in service of his truly unique vision.  It was a great pleasure to see where the magic happens. What a charged space. Not only did I get to spend time with Ron, but also his two lovely daughters, Celeste (5) and Audrey (8). 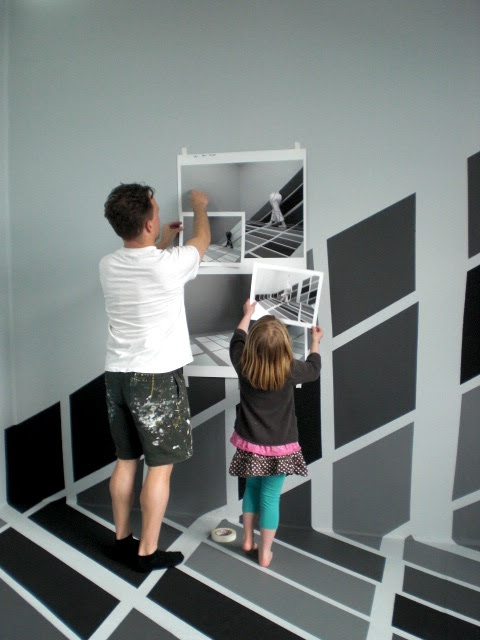 Amstutz is deep in the production of a new project. We sat down to take a look at his progress so far as he explained to me his multi-faceted process. For this work, he first recorded the light spilling through his studio windows onto a stage he built in the back of his space. He did this by taking photos at different times of day using a variety of different camera angles -- 9 to be exact. Next, Amstutz painted the reflection of the window's light onto the stage, choosing 21 different photos from the numerous ones he took to work from. This series of photos represents the passing of time through the changes of light. Ron is in the midst of painting the stage 42 different ways corresponding to the 21 photos he has chosen. 42 because he is doing one set in grey scale and one in color, using a very subdued color scheme so as not to overpower the piece. Once the stage is painted, Ron takes meticulous photos of himself in costume while striking many different difficult poses. He is also experimenting with posing in the mirror image of these gestures and taking yet another picture, which adds to the overall visual complexity.

These poses will eventually be put together to make a stop-motion video, creating a wonderfully subtle and awkward choreography. Keep in mind he is repainting and reposing for each still he has chosen from the original pictures of the light spilling through the window. I can barely do this project justice by trying to explain it. It is extremely elaborate and cared for. Amstutz is making magnificent references to the light we use in painting and the feeling we have as artists when making. 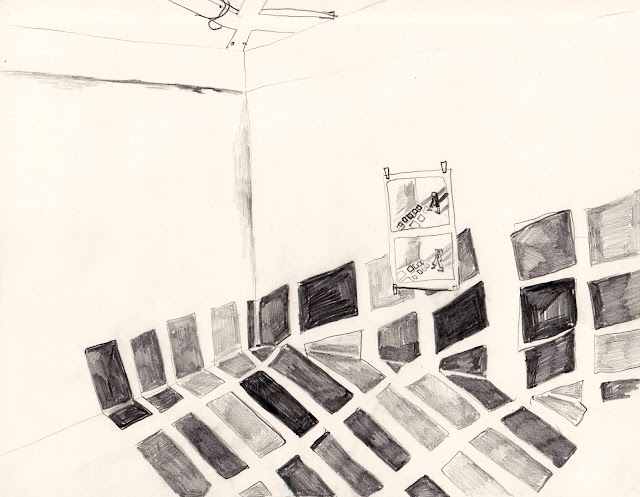 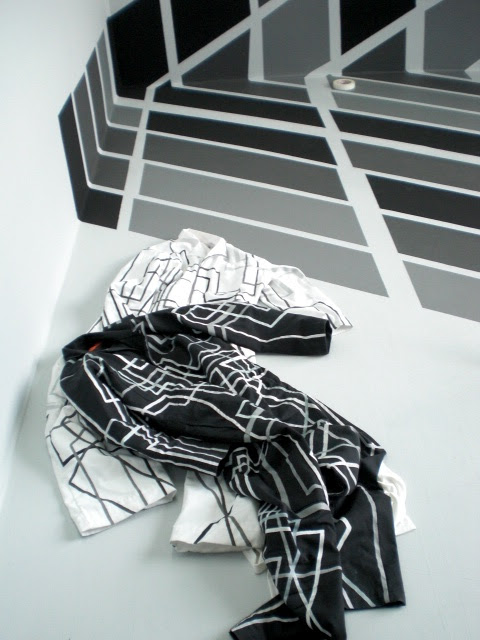 Adding to the obsessively systematic nature of the project, Amstutz paints a mark on his costume after each completed phase the stage set goes through. There are two costumes, one black and one white. I love the presence of the character he has invented. It makes for a delightfully bizarre narrative. 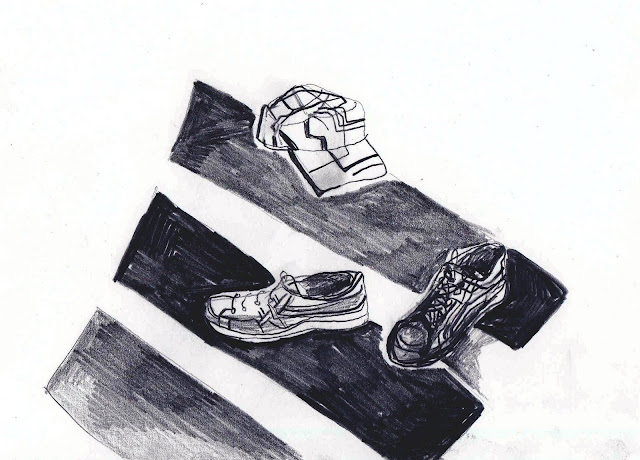 As an added bonus I had a couple of drawing partners sitting by my side, the daughters. We had a blast working together. They had quite a bit to say about the project. They are very bright girls. Here are their renditions of the stage: 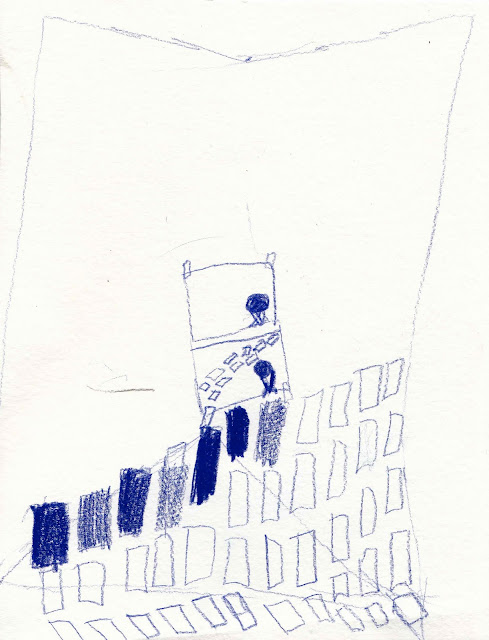 Above is Audrey's drawing of the stage. 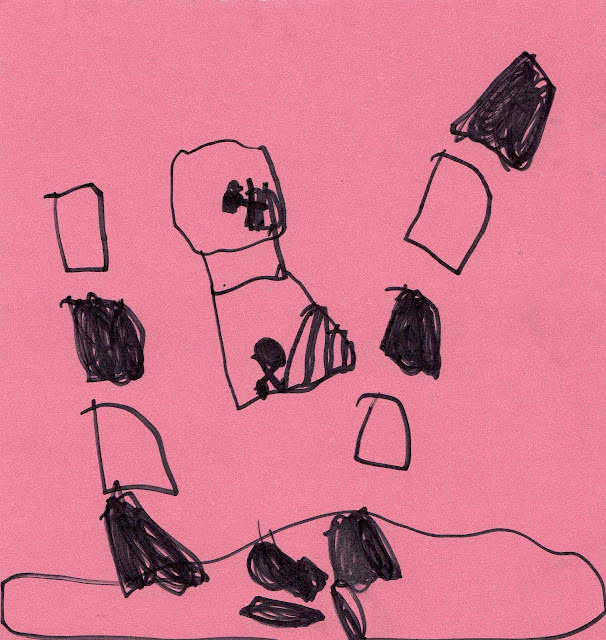 Above is Celeste's drawing of the stage. 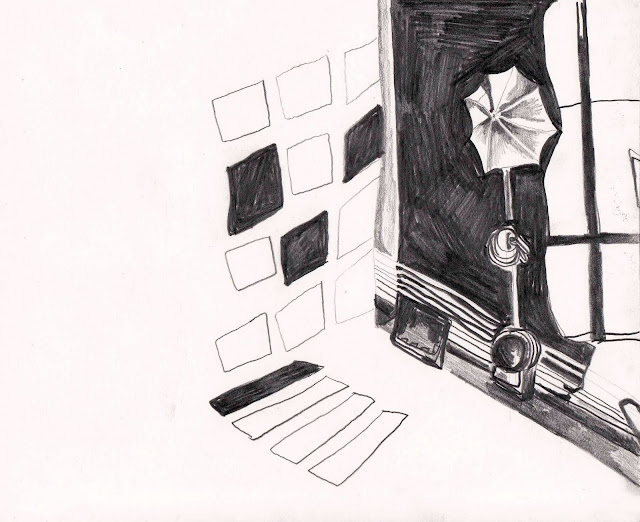 What a great ride it was to spend time with Ron and his ladies. I am so looking forward to seeing this piece at the end of its production. Ron's intense thinking and layered way of working makes for a truly fantastic experience.
Amstutz is going to be in the group show Gold Records which opens this friday May 13th, (508 W 26th st 11th floor). He will be showing one of his previously made videos. You should also check more of his work out at http://www.ronamstutz.com/ and WALLSPACE. 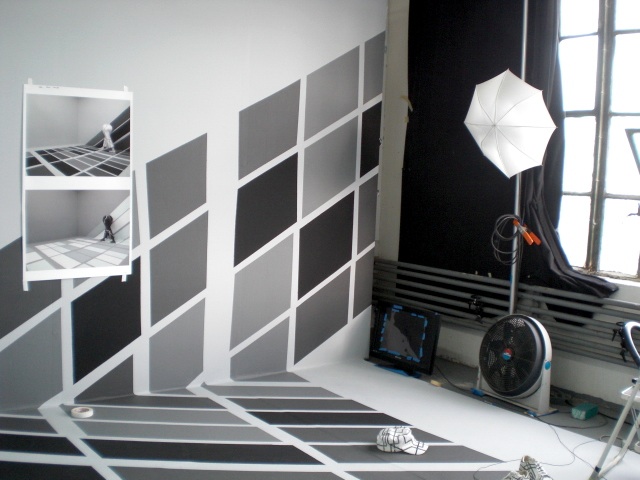