I have been following Jay Gaskill's work through all three years of his time at Hunter. As he approached his MFA thesis show, I had the chance to head uptown to make that stressful leap across Dyer Ave to the Hunter graduate studios to see one of his paintings in its final stages. It was during open studios, but fittingly, his door was closed and I was the only viewer allowed in that day. His space was surprisingly tidy, but I could see the remnants of frenzied production. The final painting Jay was working on is 8 1/2 by 18 1/2 feet in size; it swallowed me up as I entered the space, leaving me to only imagine the extreme anxiety that there must be on the maker's part in pulling off such a large piece, but Jay, as cool as a cat, was perfectly calm and focused, as expected. We walked around as he showed me other works he had made in his final year. And then, as there was a lot for both of us to do, we got down to it with our Balentines in hand, "Hunter style," as he put it. 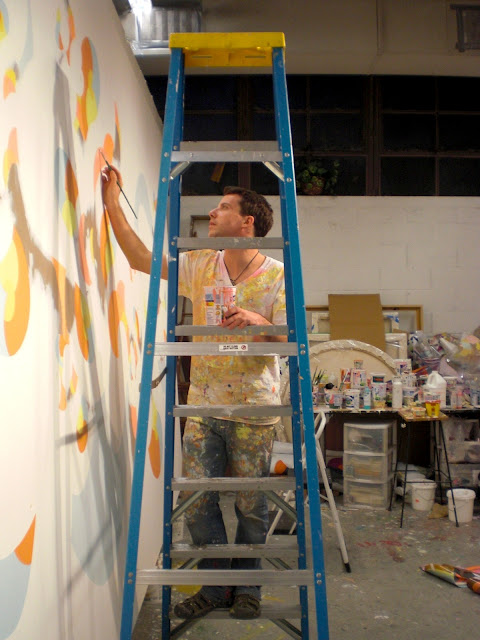 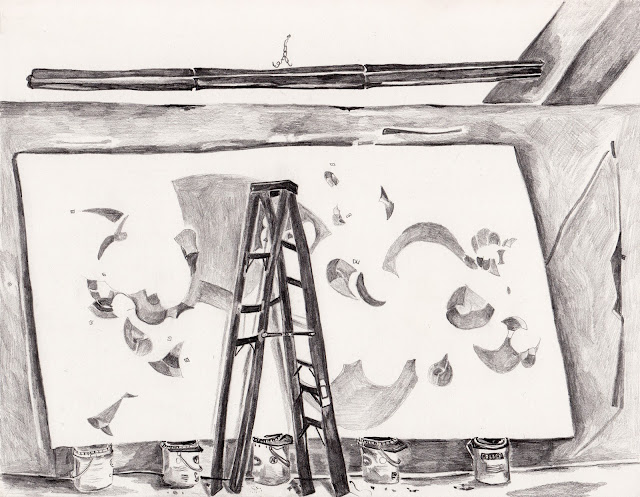 Jay's pieces are extremely well considered; they would have to be for how seamlessly they are painted. I spent quite a while gazing at the one that he had just completed prior to beginning to work on his thesis. I found there to be a vast amount of visual navigation to do on the viewer's part. Does this corner's formation mirror that of the others'?  Does the center act as a mandala or are there breaks in its repetition? How is the white used? If not as a background, then as its own color? Tricking my eyes with its twists and turns, I occasionally arrived at somewhat familiar imagery. It was as though I was finally making sense of the pattern, the colors themselves subtly bringing to mind palettes from another era, the forms reminiscent of graphics familiar yet elusive. But alas, to my increasing bewilderment, the images would begin to blur into the background or be quickly pulled away from the vibrating surface. If this was a maze, I was happily lost, all the possible conclusions put before me quenching my intellectual thirst. Unsolvable can be so gratifying. 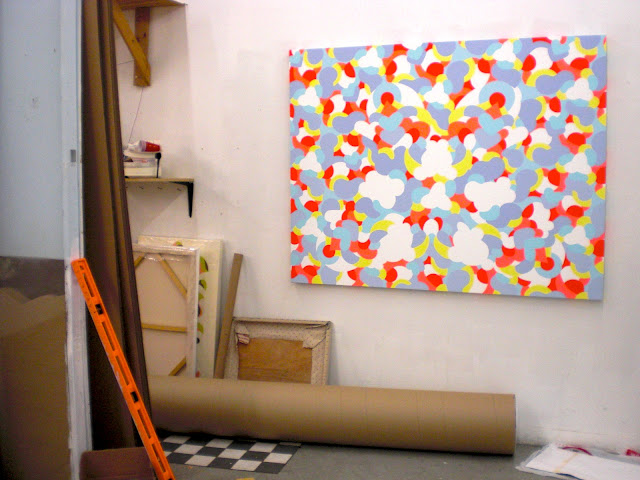 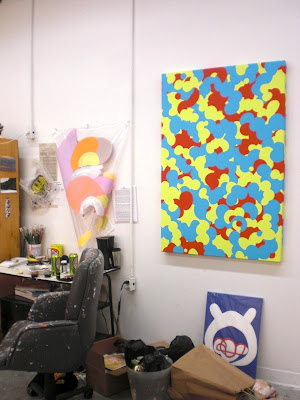 The corner of the studio had accumulated a pile of acetate that had obviously been used somewhere in his process, as Jay pulled out a few large sheets to show me which matched what painting it became clear how complex his process is. Obsessively deciding how the piece will be laid out, he paints onto the acetate possible patterns and then holds it up to the canvas. Not always satisfied, he might repaint the acetate and hold it up once again. He repeats this action over and over, making new configurations each time, until, in a moments notice, the right composition is found. Jay explained to me how much deliberation there was in working out his largest painting yet, -- the one he was propped up on a ladder for while I was there. Stupefied by this act, I realized how completely he is using time-honored systems of painting. 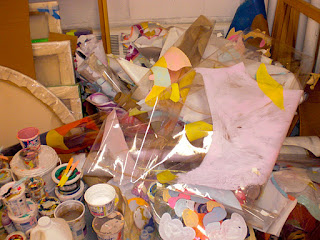 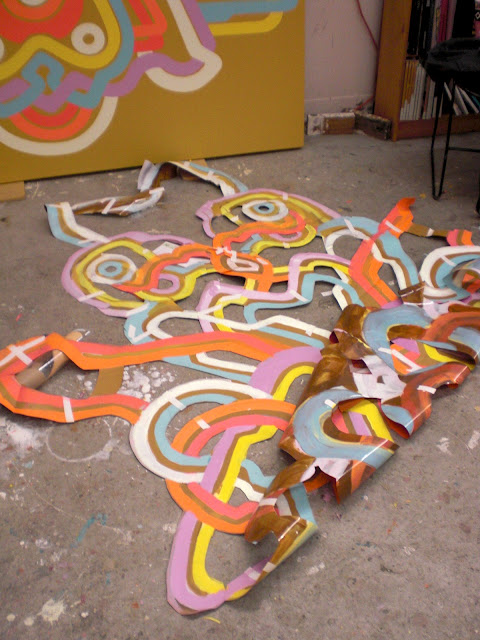 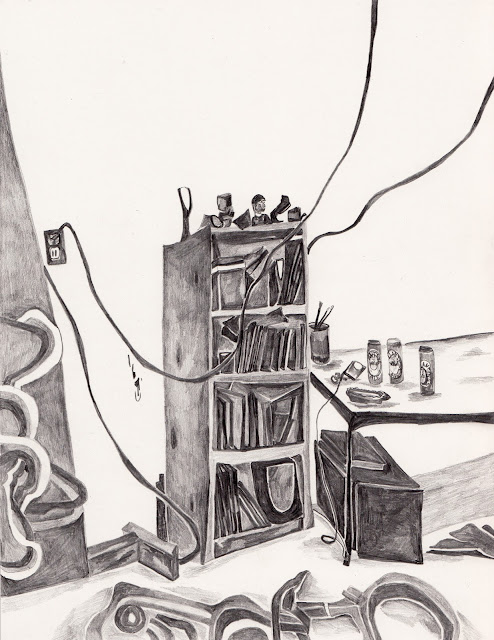 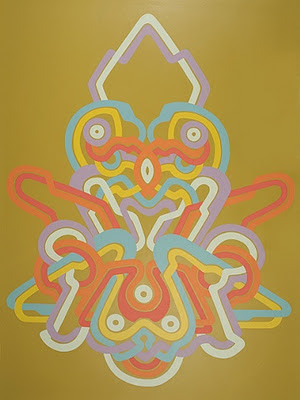 There is nothing quite like the juiced-up energy that exudes from an artist about to finish up a program. Jay warned me he was going to be working hard and late. He told me that I was welcome to stay as long as I wanted, but that he would be there well into the evening; he was right, I tuckered out after only 6 hours. I had such a fabulous day there with Jay, talking about our art, the art world, and our busy lives. He also filled me in on some crucial NFL developments. We took a break to walk around and visit some other studios, stopping to talk to various students in the hallway. It was obvious that everyone was as much a fan of Jay and his work as I am. I can't wait to see his thesis show next week! It opens on Wednesday the 14th (6-8pm) at the Hunter MFA Thesis Exhibition. Be sure to check out more of Jay's rad work at www.jaygaskill.us.
Posted by Maria Calandra at Wednesday, December 07, 2011