Pre-holiday craziness, I made my way to Ridgewood, Queens to visit the studio of Joe Ballweg. He has a very large ground floor storefront space which had previously been a knitting factory. The building  was sold to Joe and his two friends as the company was moving to South America, romantic in its history. The studio is organized for both the viewing and making of his work, a helpful step in any practice. Joe, being partial owner of this two floor building, not only has the cozy upstairs apartment to retire to, but also a tranquil backyard complete with bonfire. I was stoked to see several new pieces and the new directions they have taken. We talked over these new works, and had an extensive chat about the pop-up shows he has started to have in his studio. The second of these shows having just happened a week prior. Once he puts away his own work, there is a nice amount of wall-space for these exhibitions that he curates with artist girlfriend Andrea Bergart. He explained how he likes to show artists that don't already know one another in order to facilitate new connections between them. 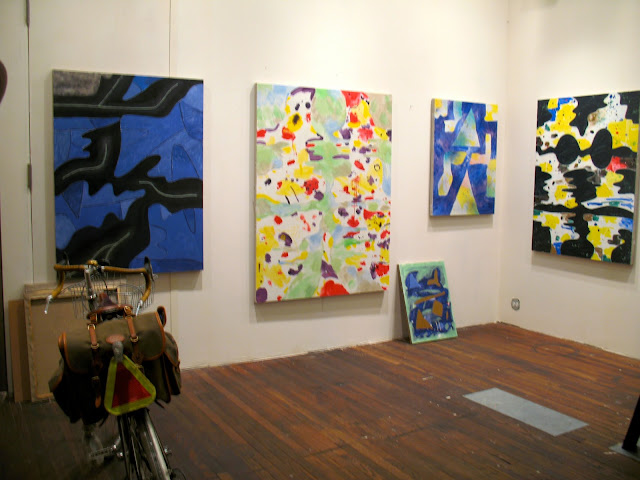 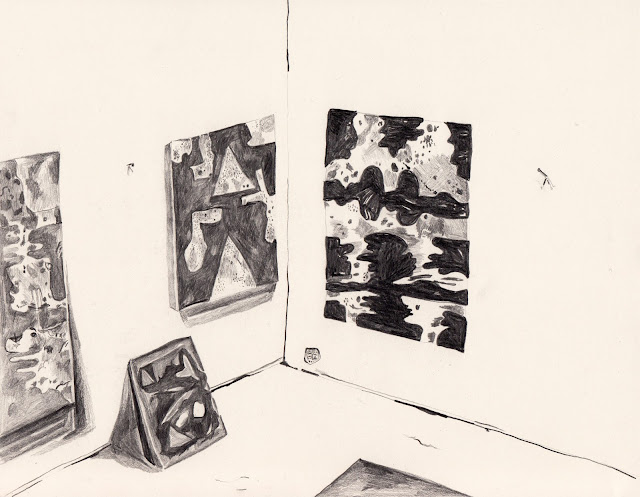 Joe's paintings strike me at first as a kind of collage that operates without any actual foreign matter being attached to the surface, an optical illusion of sorts, the kind of illusion found only in the history of the work's process. Thoughts of maps, silhouetted figures, or meandering river beds also come to mind when looking at his sometimes intensely colored canvases. By butting one large winding form up close to the next, Joe leaves the viewer to decide which space operates as the negative and which as the positive, creating a charged vibratory line in-between the two. By playing with multiple abstract fields subtly, but with obvious direction, he allows the surface to capture these carefully considered lines, letting them act predominately along side of the other formal elements in the paintings. 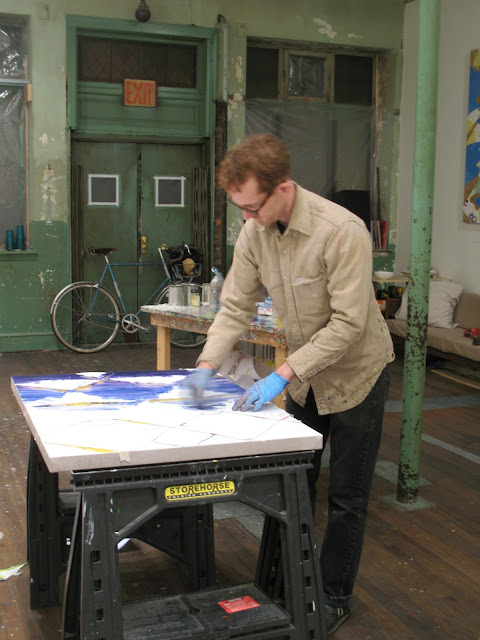 Each slight movement of the brush on the canvas, be it a splatter or a swoosh, showcases as a satisfyingly whispered detail. While I  was there, he had laid flat a painting on a couple of sawhorses. Mixing oil colors on the palette next to him, he gave the surface varied and exploratory gestural movements using multiple tools. My interpretation of the paintings resembling collage was confirmed when I saw that Joe does in fact layout pieces of paper on the painting's surface (as well as cut pieces of tape) to block out one section while working on another. By doing this, it is like he is working on more then one painting on the canvas at a time. And, later, at the end of the process, the two seamlessly come together as though worked on simultaneously. 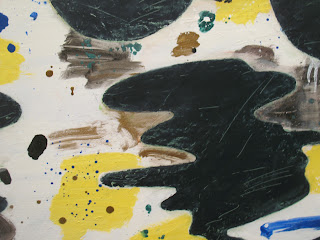 Close up of a painting 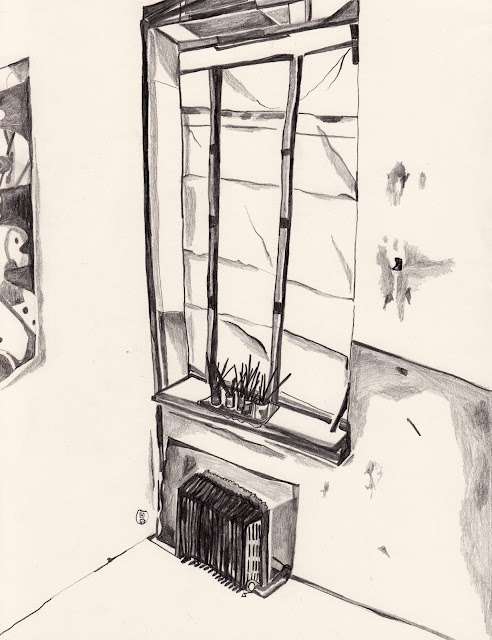 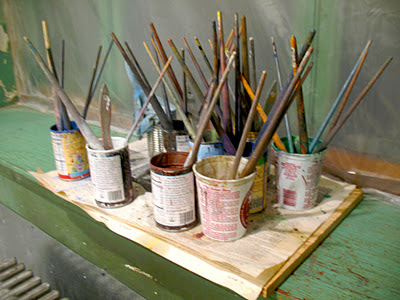 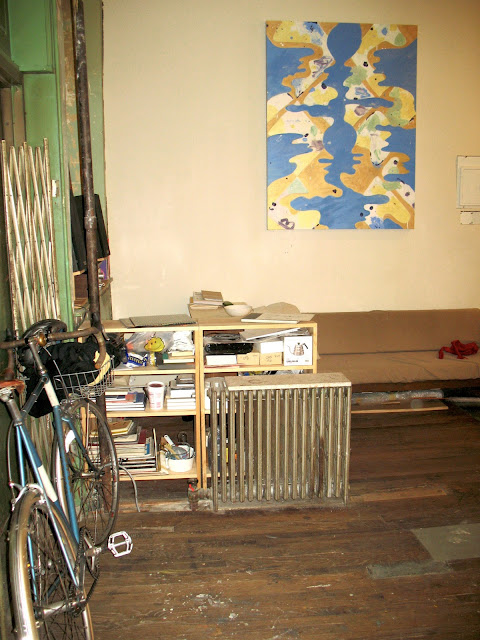 As the visit winded down and we prepared to go upstairs for tea, Joe and I had a talk about our contemporaries, where we are as artists and how charged the scene in Brooklyn feels. His charmingly sarcastic grin reminded me that you have to take it all with a grain of salt to get the work done in the first place. Later, we were off to a yearly POI holiday party with White Elephant gifts in hand. Joe and I had a couple of swaps within this gift giving game. I ended up with the pure maple syrup I wanted after convincing Joe that the scarf I had been swapped out for would suit him better then me. Thanks for being a good sport, Joe. To see more of his lush oil paintings go to http://www.joeballweg.com/Home.html and keep an eye out for the next pop-up show in his studio.
Posted by Maria Calandra at Saturday, January 14, 2012