How another year has sped by so quickly, I don't know, and I am certain that the students are feeling the same way — once again it is time for Hunter's MFA Thesis Exhibition. I had been holding out visiting JJ Manford's studio for awhile now in order to draw up proper anticipation. A few weeks back, on a cold and particularly windy Sunday afternoon, JJ and I met outside his studio building.  While still working on our dollar slices, we headed up to the fourth floor for a joint day of art making. I was immediately dumbfounded by the new body of work that filled JJ's space, having not visited him in such a long time. Not only is he tackling very large sized canvases, but also very large sized ideas. No holding back here, JJ is jumping into Thesis with full gusto. 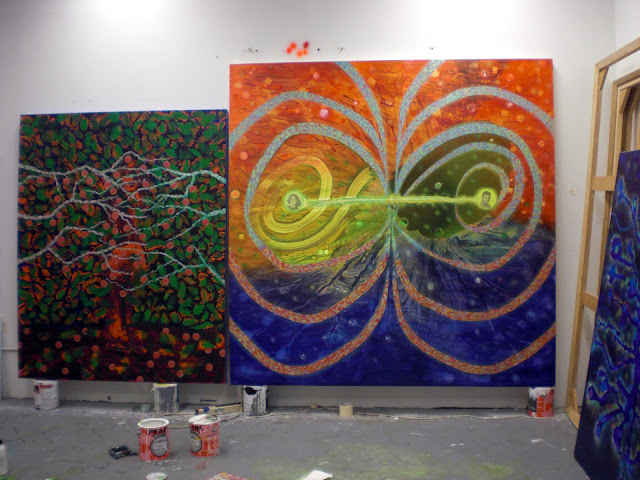 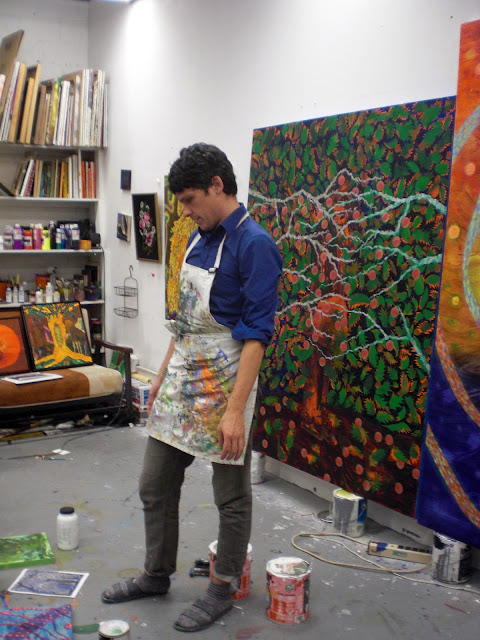 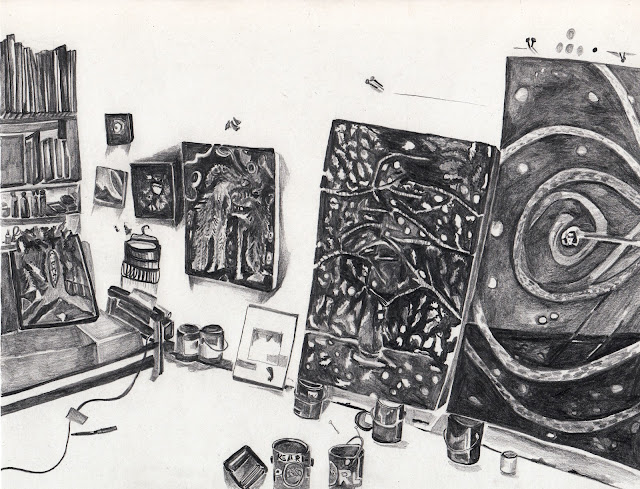 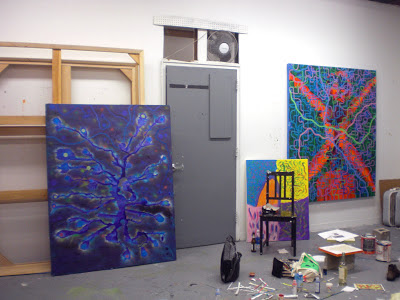 Small panels were scattered across the studio floor. JJ explained that he is working simultaneously on all the paintings, with the large ones leaning up against every available wall space. He told me that he often over-mixes a batch of paint for working on a section of a larger piece and quickly uses the remains on a smaller piece — never messing with his studio rhythm and making good use of his vibrantly colored concoctions. Having had a pretty long history of talking to JJ about his work, we arrived at some of the same places we had been before, but were mostly entering entirely new territory. I told him that I saw elements of these new paintings reading like a fantastical projection of what you might see happening inside the artists' mind or behind their eyes. I suppose this could be visual, intellectual or scientific. It is almost as though he has arrived at the work by painting what he sees when he closes his eyes just after looking at a bright light, with his marks that make up noisy circular flashes and strings of electric color. Maybe he is giving the synapses (those rapid transfers of signals that happen in the brain from one cell to the next) a pictorial description. I liked thinking that the figures that he has begun to use, which act somewhat autobiographically, form a narrative of his past experiences. The figures appear quite appropriately with the abstracted synapses — as they play a major role in the formation of our memory. 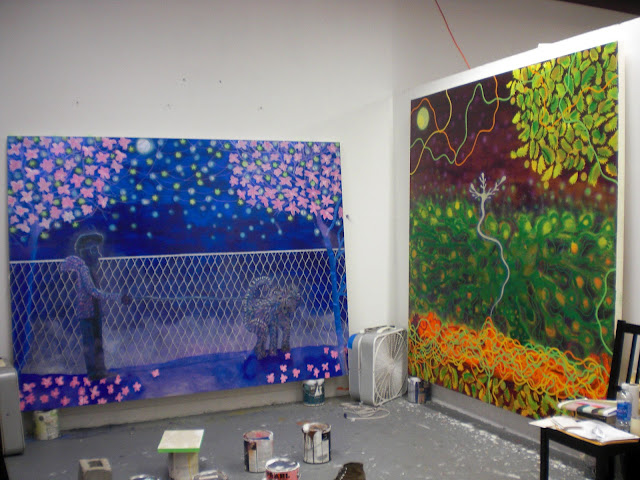 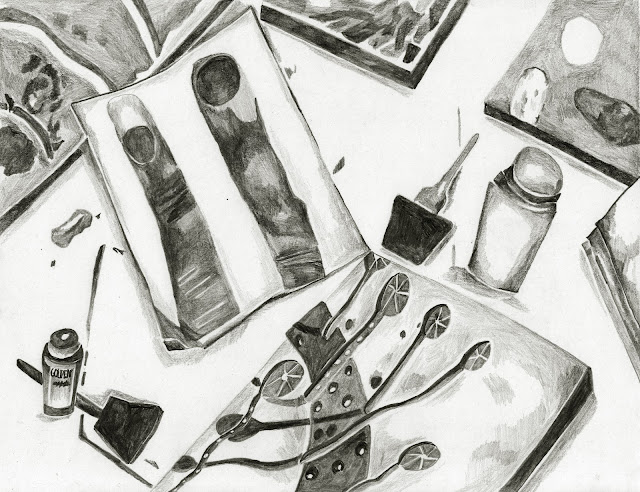 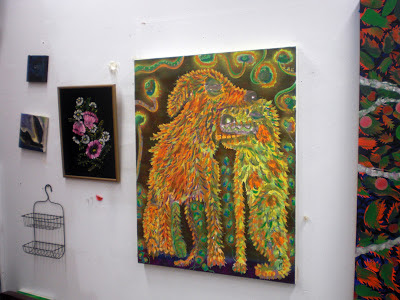 I snuck a look back into the files of paintings that record his time spent in graduate school and caught a glimpse of a vaguely suggested figure hidden within the swirls of color used on the canvases. JJ makes pours of paint on the surface at the beginning of a new piece, later finding a way of giving definition to the pour. These preliminary actions record his use of chance and once again make me think of the many swirls going on in the artists' mind as they begin the process of making. 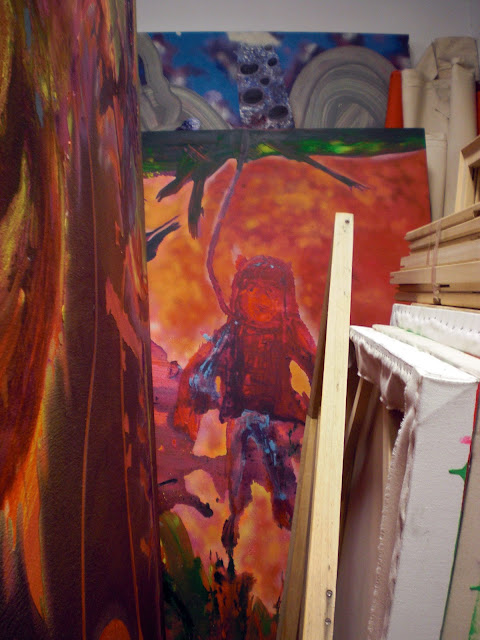 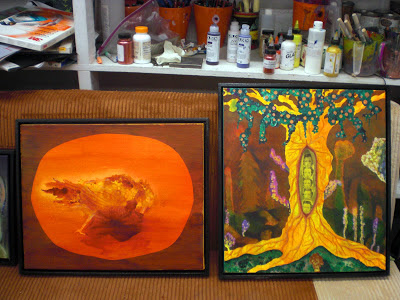 At the end of our visit, as he walked me downstairs, we stepped in to take a look at the space where JJ will be hanging his paintings. While gazing up at the emptiness that stretched across the vast white walls, I saw the excitement and anticipation on his face to be finally ending his time at Hunter. We had a splendid day together and I am so pleased to have seen him in his final stages of production. So, firstly, I encourage you to come out to see the Hunter MFA Thesis Exhibition that opens on December 12. Also, he is showing some smaller works the following evening, December 13, at The Hogarth Worldwide Biannual, 6-9, at Hogarth Worldwide Inc., 230 Park Avenue South, 11th Fl, 19th. And if you are up for more, come to Peaces on Earth, an exhibition that Jon Lutz of Daily Operation is hosting in collaboration with Sardine which opens December 15th, 5-10. You will see a lot of work from various PITS artists represented here and all the works are under $200, perfect for pre-holiday consideration. For more of JJ Manford's paintings go to http://jjmanford.com/.