I sort of pushed the limits of my sanity when I tried to turn these particular artworks into greyscale drawings. There is a twofold approach to painting in Aaron Johnson's practice. When I first arrived in his studio he introduced me to both of them, along with a few of the characters that were hanging around the space. Sometimes his paintings lay so smooth and flat that they almost appear to recede from the surface. In this case Johnson uses a very involved process that adds layers, in reverse, to a large piece of plastic that he then stretches. On the other side of the spectrum, he uses socks like a kind of impasto to greatly build up the surface and form theatrically animated creatures. After our conversation, Johnson began to work on a mere second layer of a massive new piece that he is getting ready to show at Pulse Miami with Gallery Poulsen. I steadily worked on my drawing in the hopes to fill it somewhat accurately before nightfall — without starting to see things come to life. 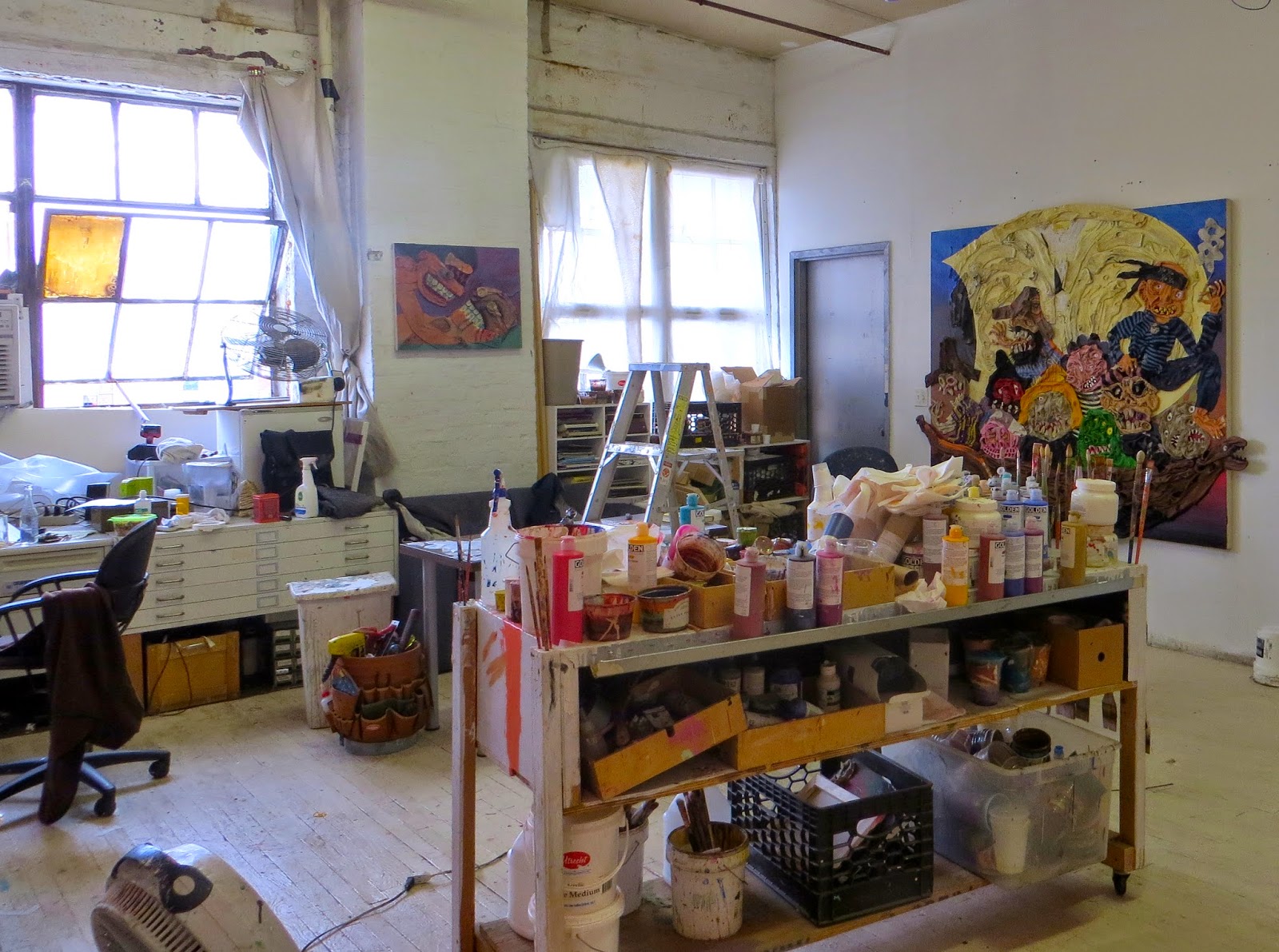 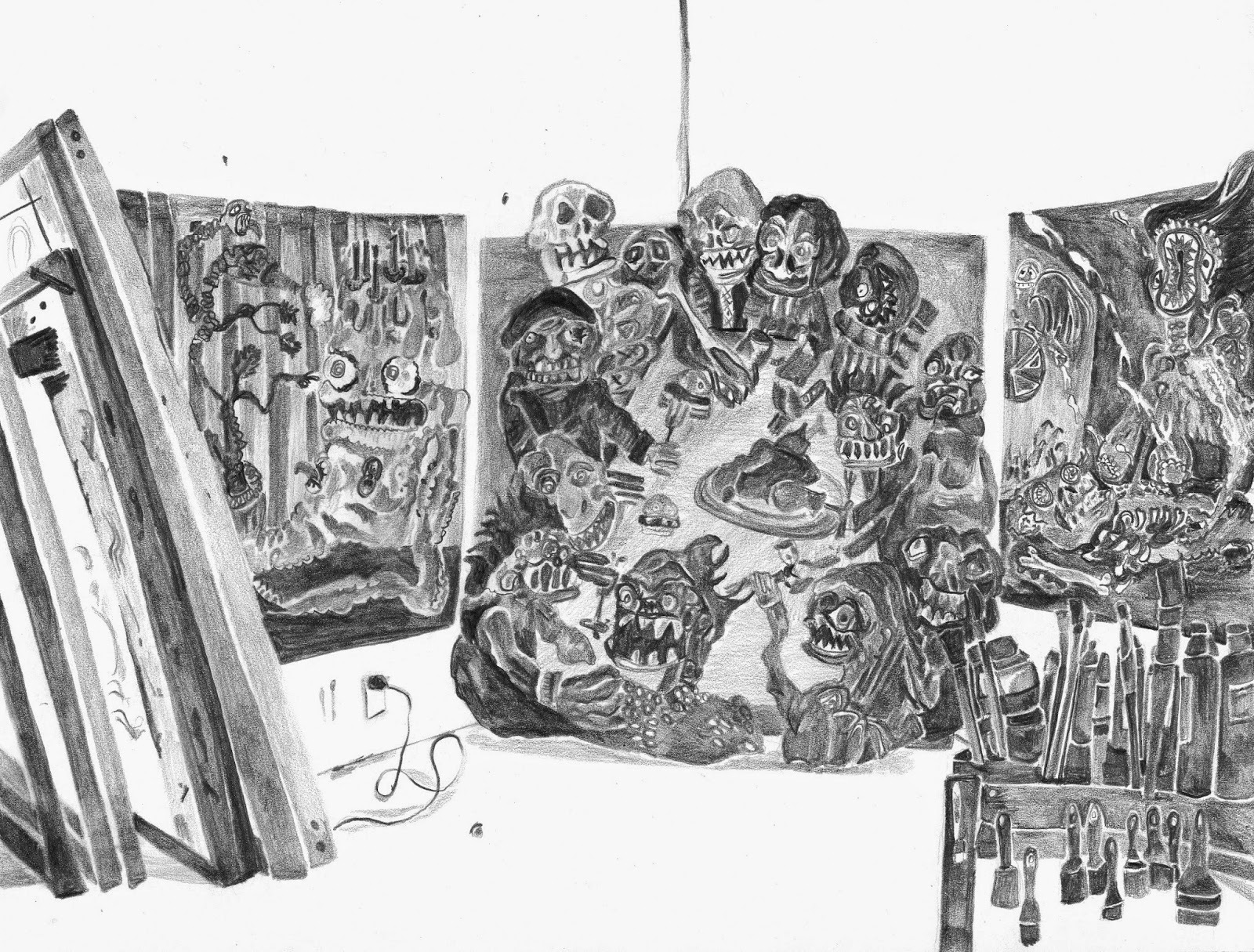 I couldn't help but want to enter Johnson's unearthly world. After all, it was the week of the blood moon and October is the only month that most people even think of a more lurid existence —one that might include saw-toothed mouths, faces that bulge with eyes, and beasts that play guitars and pianos. But it is not only this month that this subject holds prominence. There is a long history of the macabre appearing in art, ranging from the string quartet Death and the Maiden by Schubert from 1826, to the nightmarish tales of H.P. Lovecraft, to Michael Wolgemut woodcut "Dance of Death" from as early as 1493, to name but a few. Johnson narrates his own contemporary version of the macabre combining humor and social commentary with his particular brand of garishly colored symbolic story telling. I was especially taken by the sperm that turned into tiny ghosts as they passed through one of his ghoulish figures by way of the the grave. A labor of love much like his paintings. 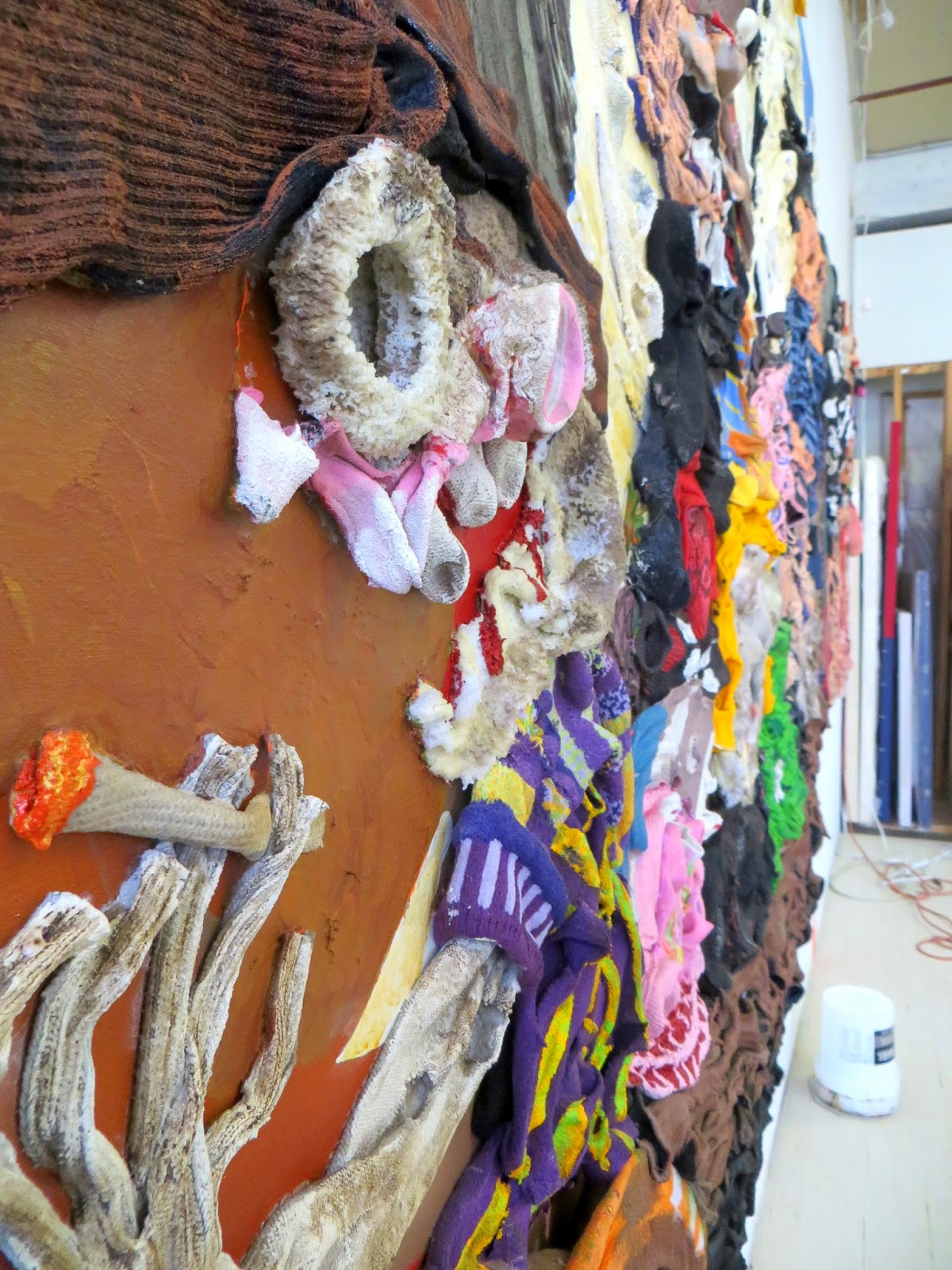 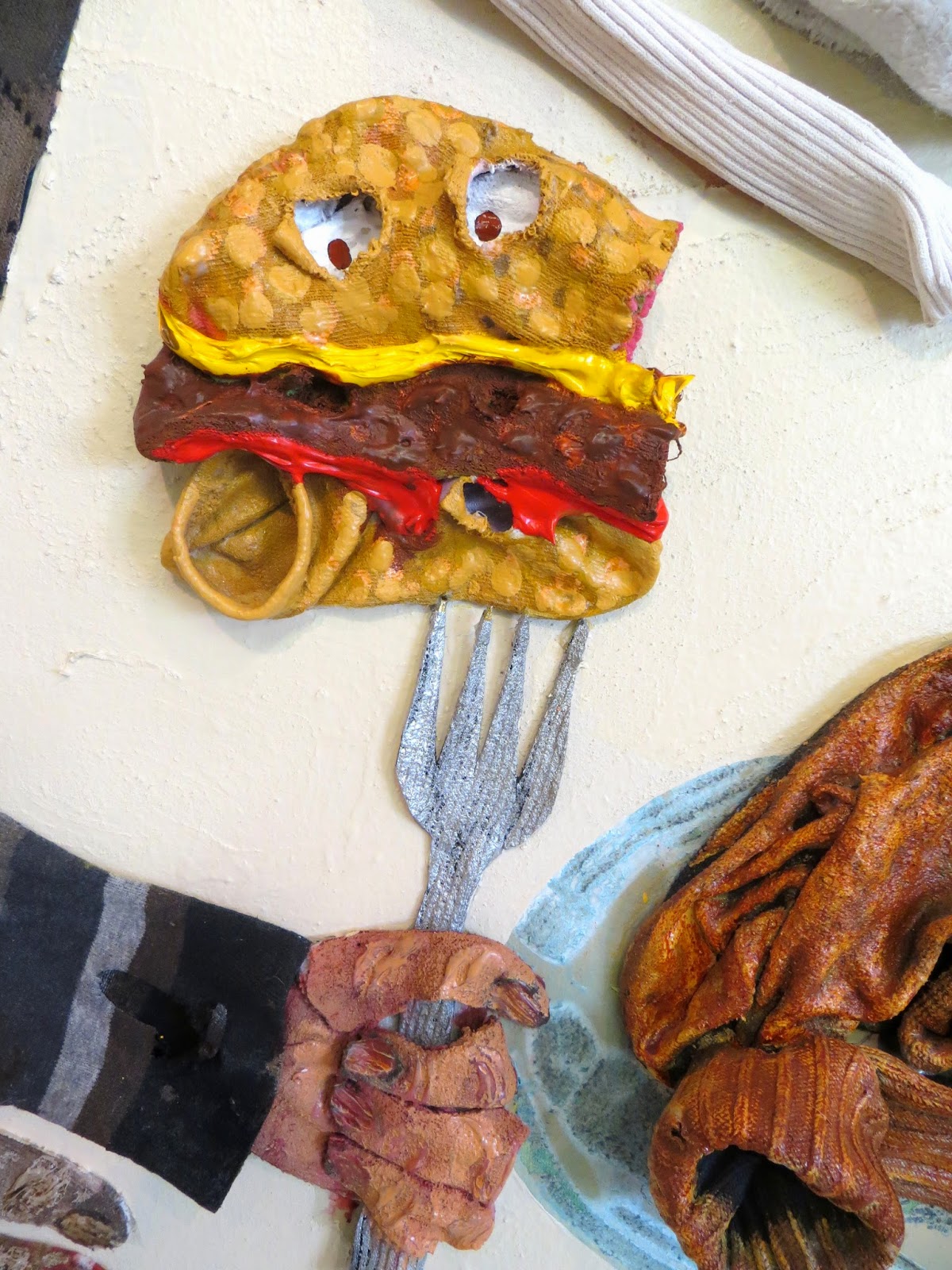 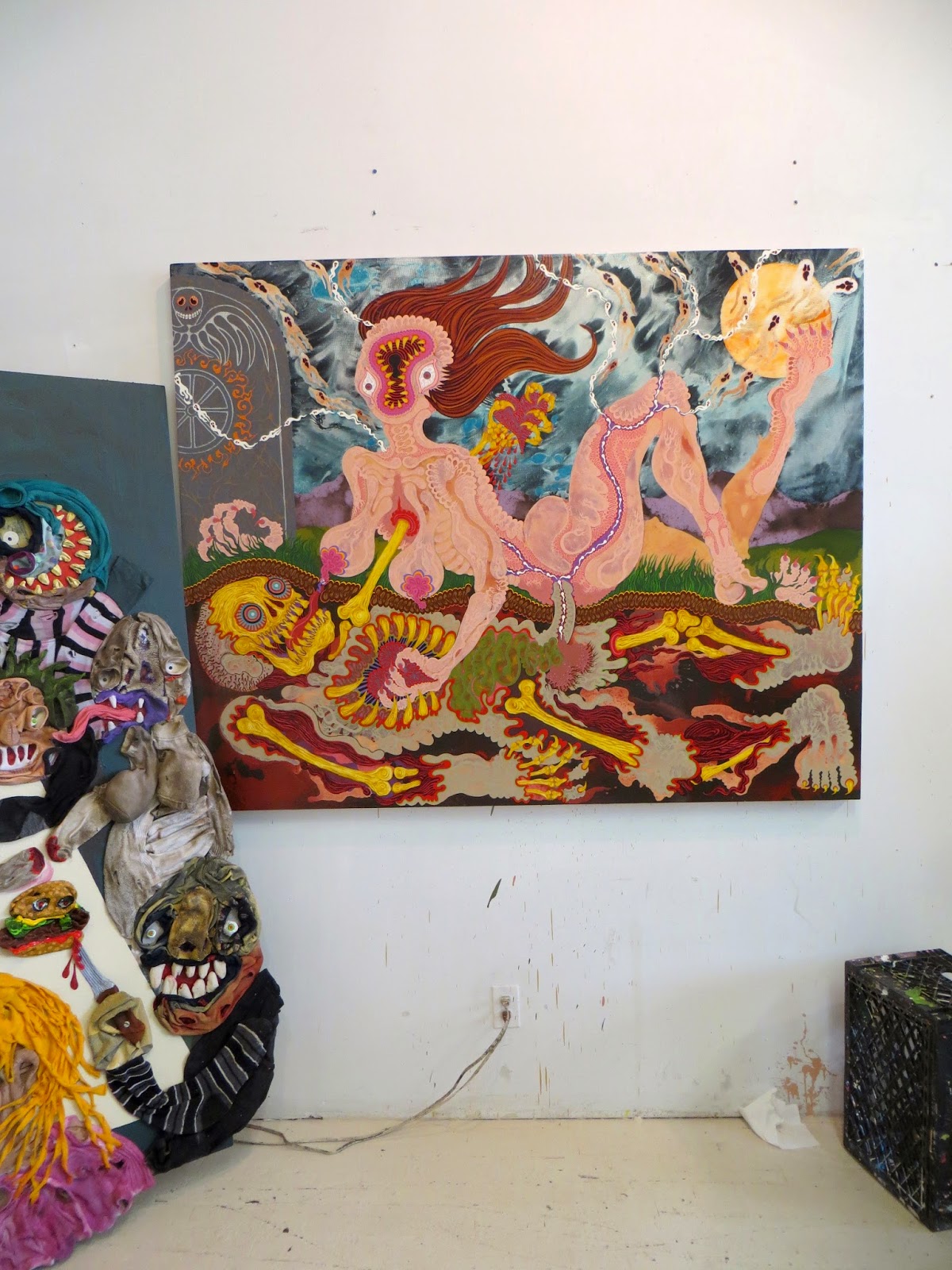 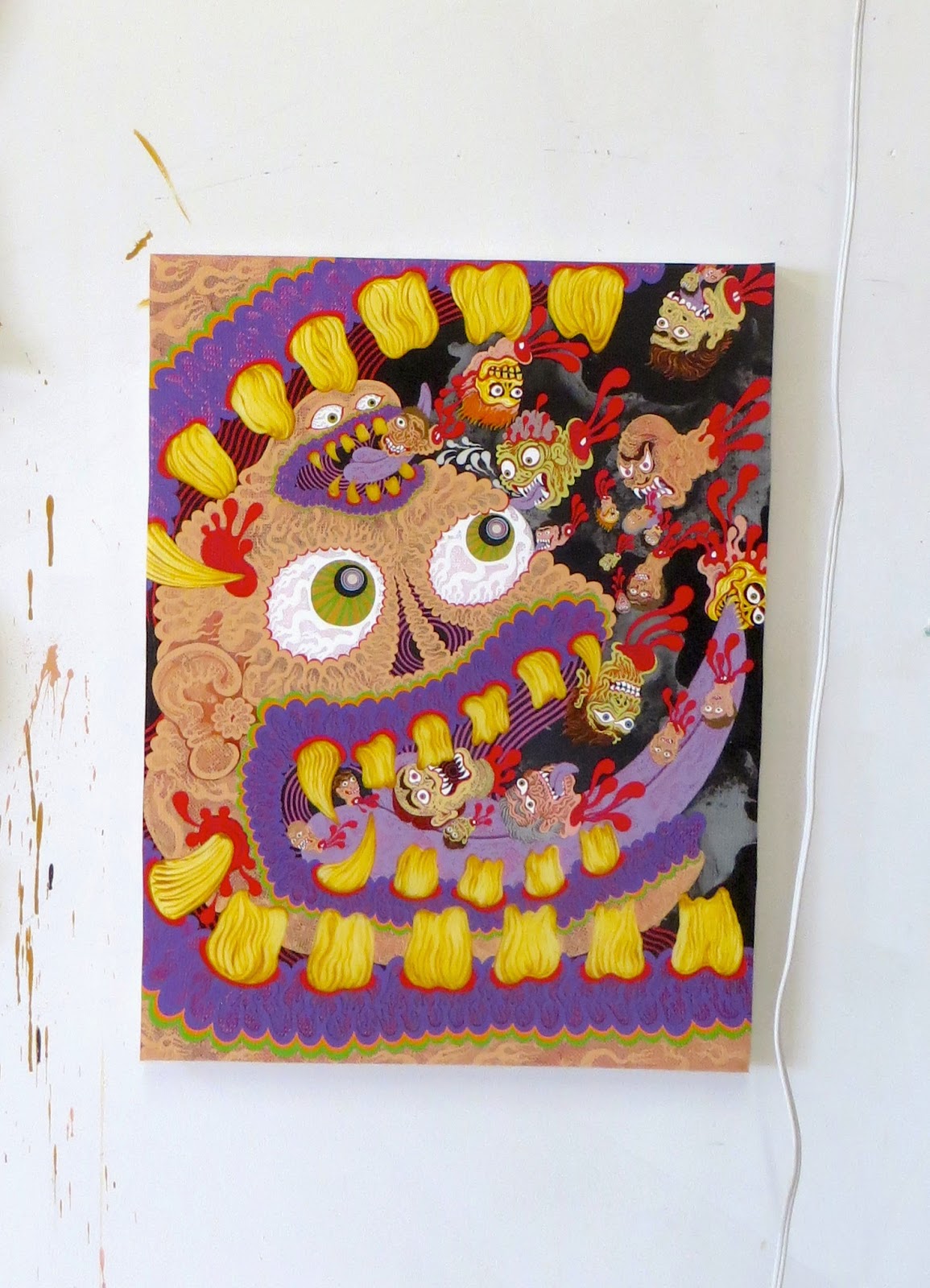 I did manage to draw all the gaping-mouthed monsters staring out at me before our day ended. During our studio visit we talked about who we were before art brought us to NYC. I wasn't all that surprised to hear that Johnson left his life for New York to start as a painter with a background in science. Not only is his process hard to imagine being thought up by anyone who is not a little bit "mad scientist," but his invented worlds seem grossly biological. Johnson has a solo show in January at Arts and Leisure. He also has a solo show in February at Stux Gallery.  To see more of Aaron's work go here http://www.aaronjohnsonart.com/
Posted by Maria Calandra at Wednesday, October 22, 2014