It was a dark and stormy night, but once I stepped into Alicia Gibson's studio everything seemed a little bit brighter. Her space glows pink from the light reflecting off of the intensely colored canvases that slather her walls. Gibson's square shaped studio is locked in the middle of a building in Greenpoint where a few of my other visits have taken place. I was pumped to return here to do a drawing session with Alicia. We met up in the evening, and after taking a minute to open our beer, wine, and take-out food lids, we started a conversation about the paintings. The conversation continued as I worked, with Alicia narrating each piece as I came to it on my paper. The spontaneity and directness of these dense, allover paintings requires time to digest, which is only half of why they are so extraordinary. But, as you can imagine, hearing her tell captivating stories about each as I worked helped me get through drawing them. 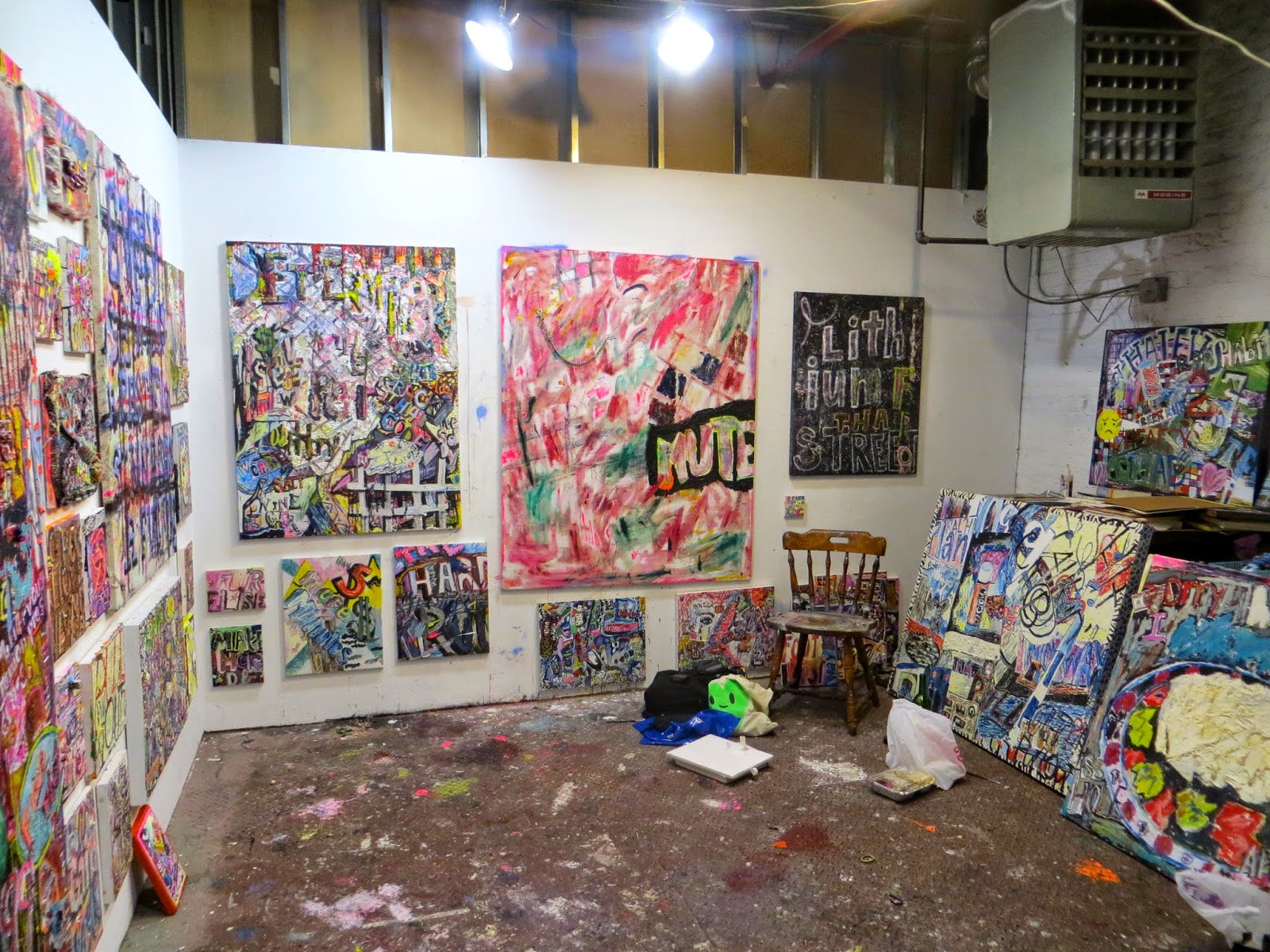 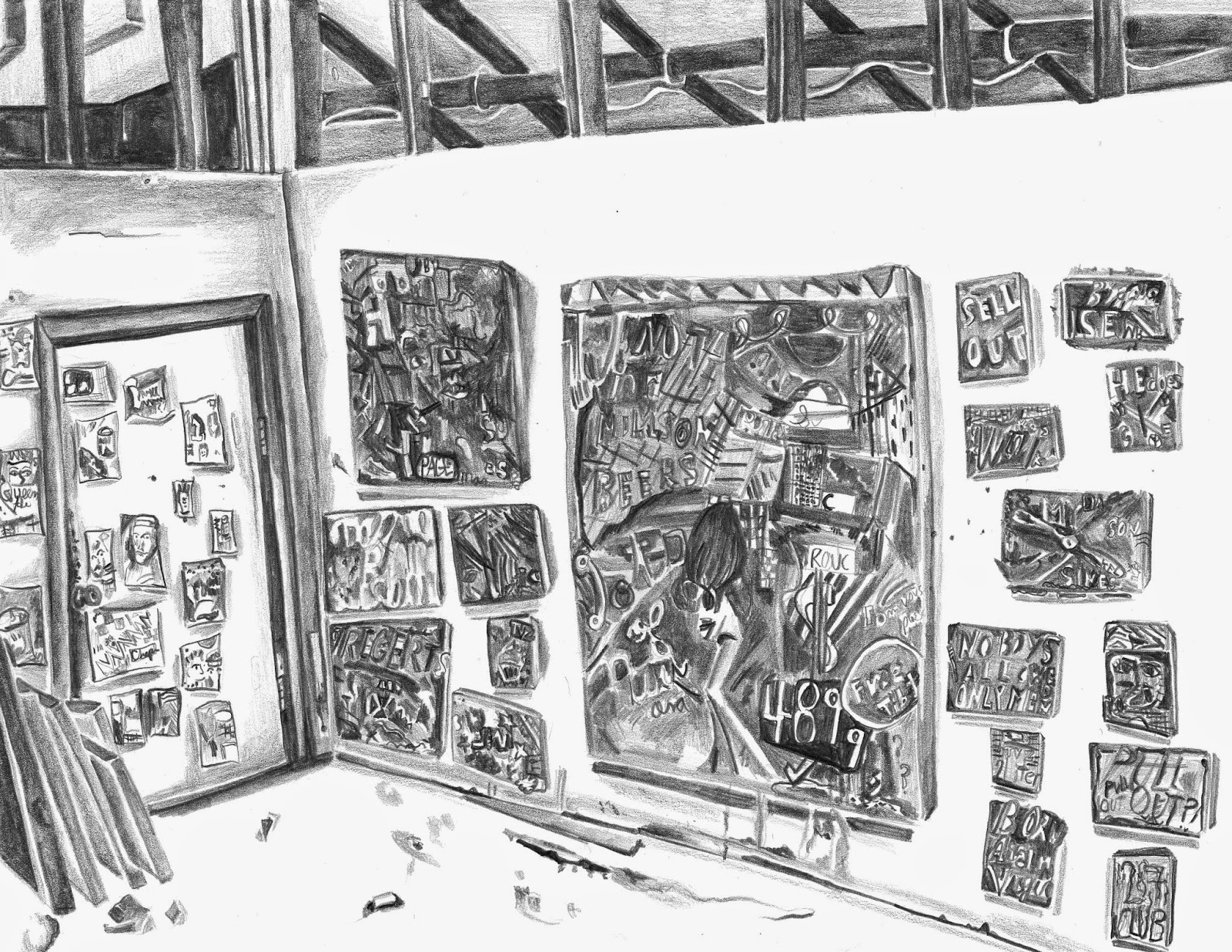 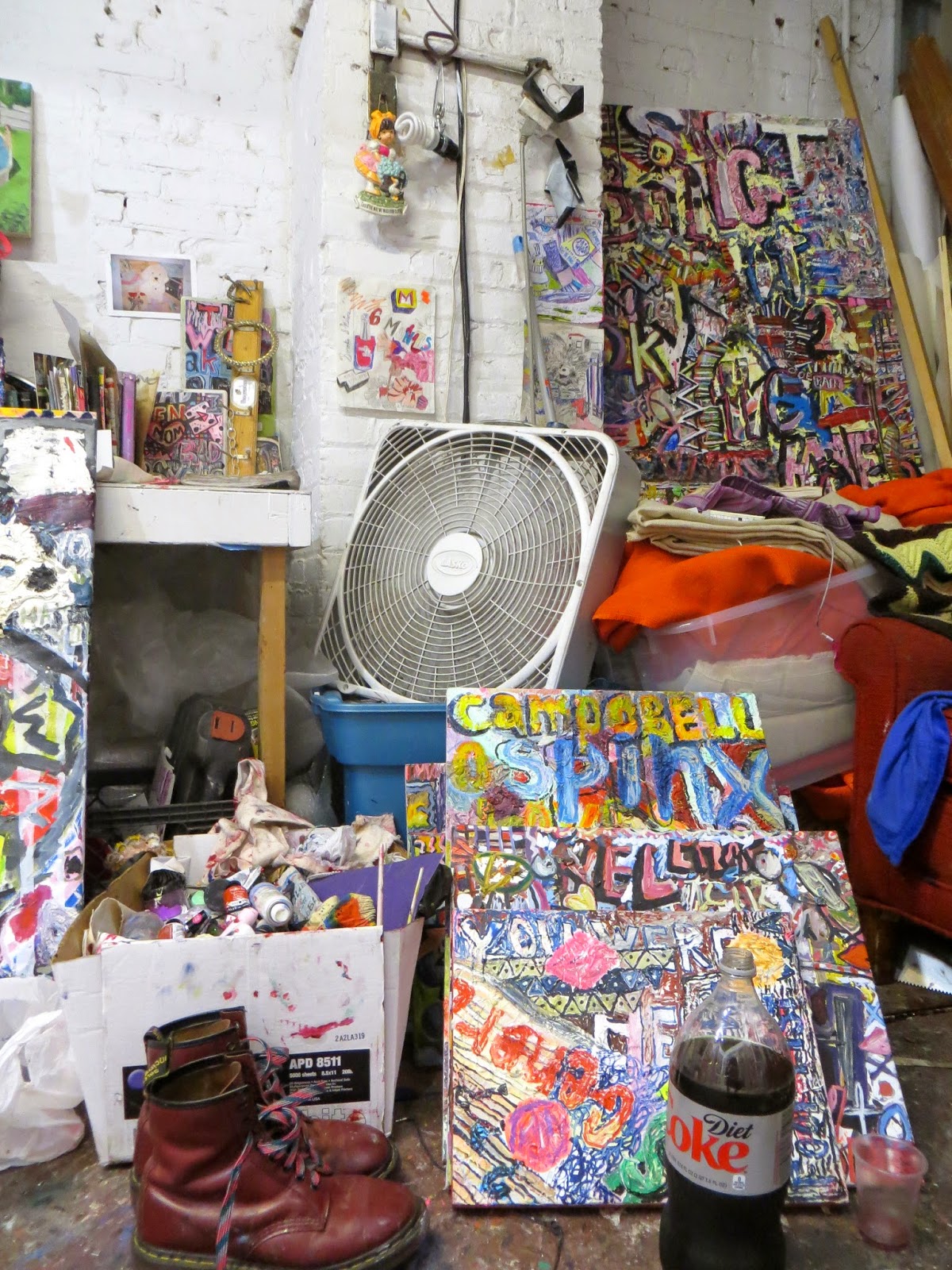 In some ways Alicia is giving Abstract Expressionism a run for its money; adding things such as text, fur, and the occasional dollar store item to her paint soaked canvases and panels. Using a deliciously high contrast color schemes, the paintings' overload of imagery and letters easily coexists as each outlines the others' forms. One moment or thought runs into another like a muddled sense of memory. Visually untangling Gibson's paintings — which take a certain amount of patience — is a pleasurable way to uncover all of her narratives' engrossing details. Her smaller paintings, being a faster read, act more like one liners and spout subversive and witty double entendres, "5 More Minutes" being a good example. It isn't hard to find elements of these that relate to our own autobiography. There is a satisfying sense of freedom in the way that her paintings seem to flow out of her without censorship. Maybe that is why they are able to bring us to a more metaphysical state of mind. 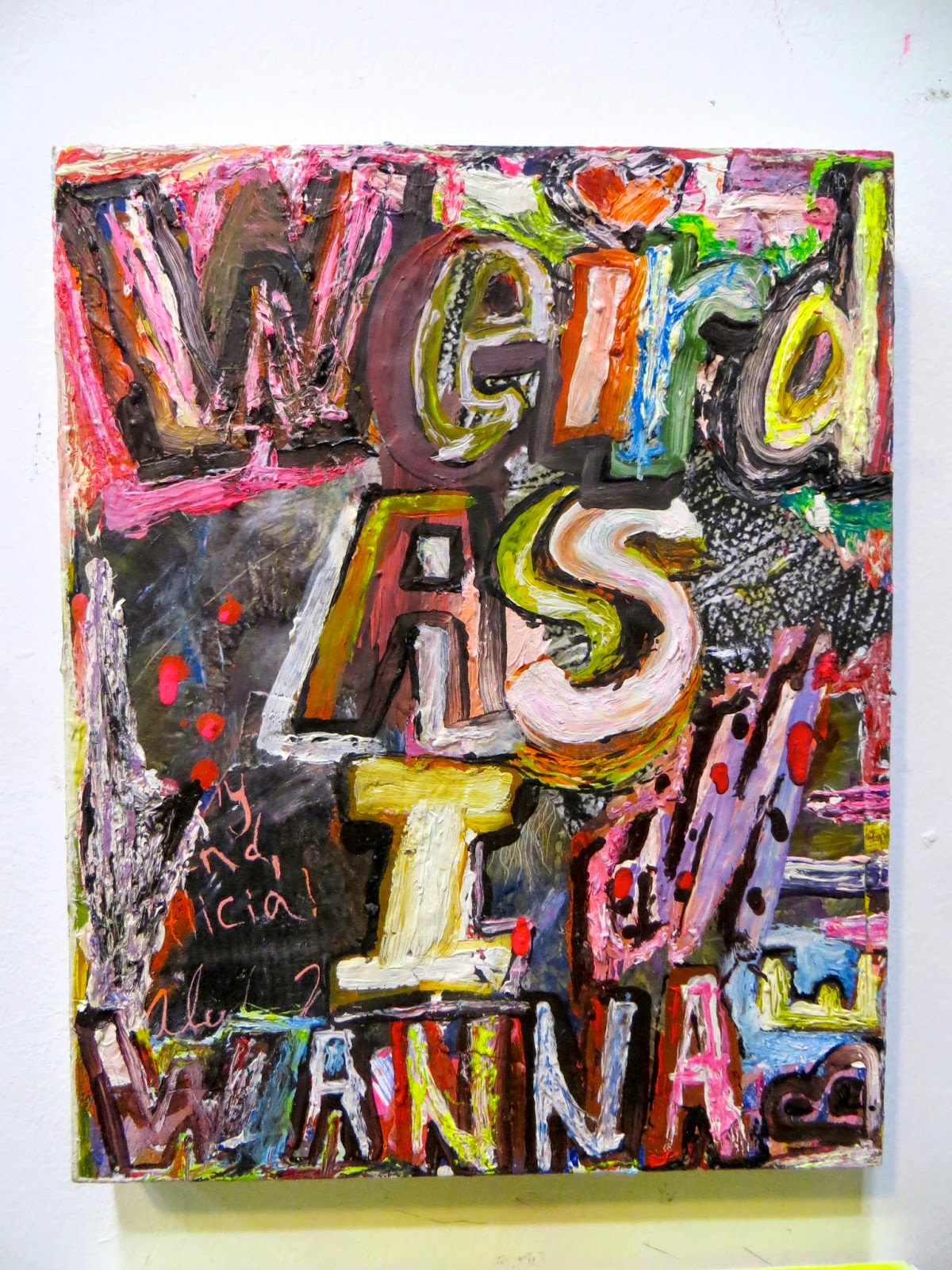 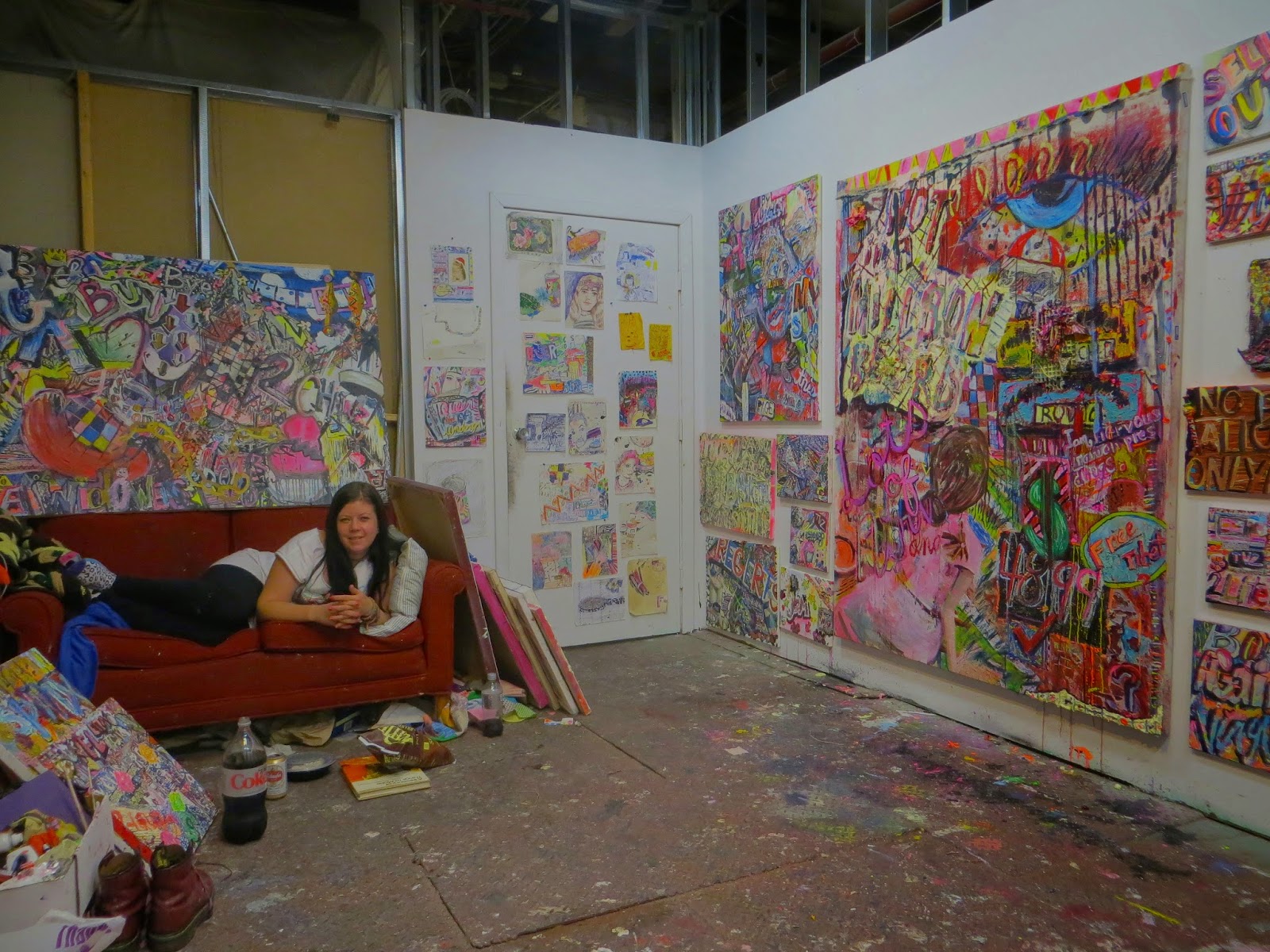 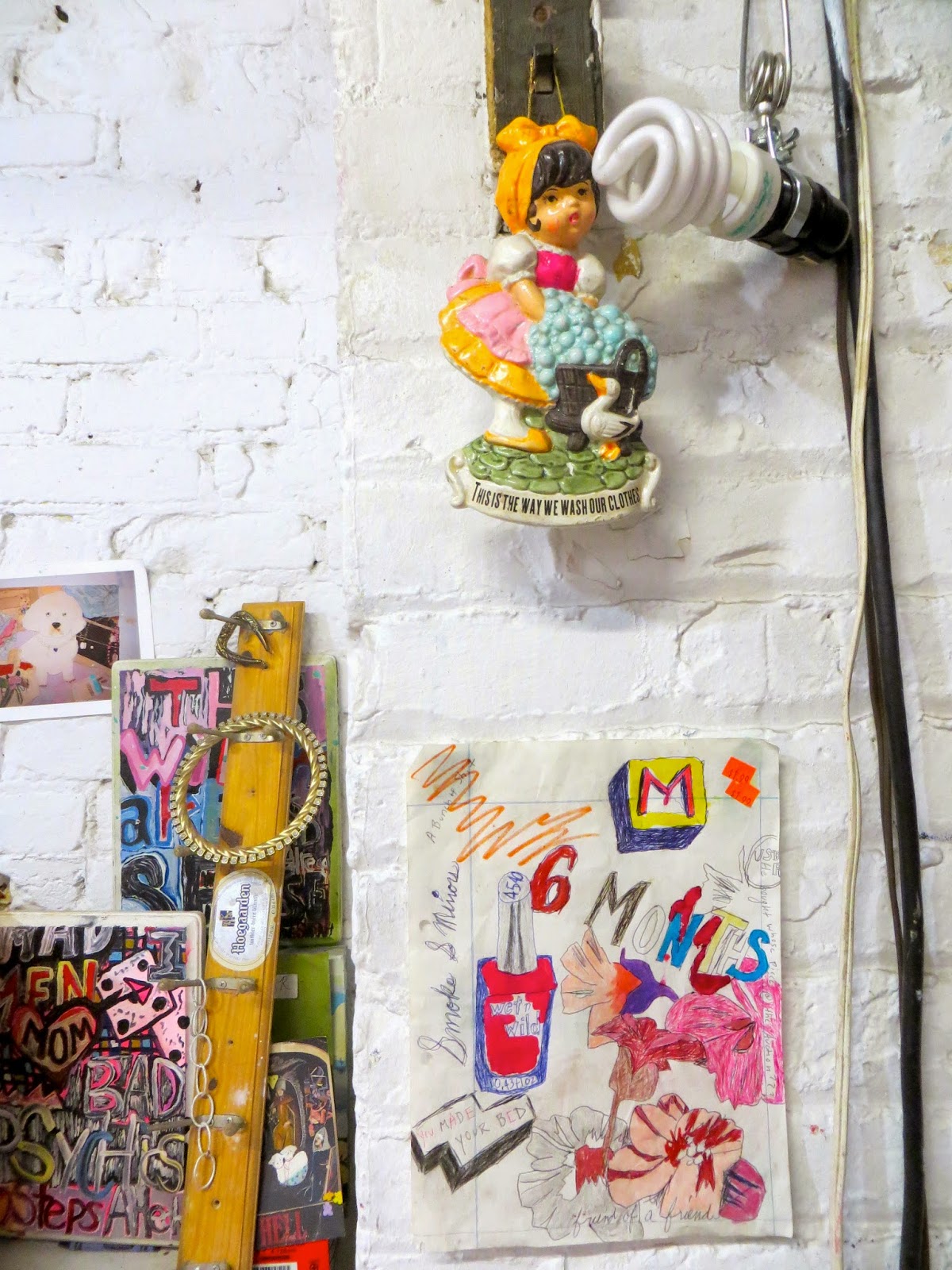 It was inevitable that at one point we talked about how gender plays a role in her work. I don't think you can pigeonhole her paintings one way or the other. I do know they specialize in the very strong voice of Alicia Gibson. Once we decided to call it a night it was very late and still raining outside, maybe we should have stayed for one more beer to talk it over. Gibson has a show coming up at TSA Gallery LA that opens November 8 and runs through December 6th, and will be in a three person show at Novella Gallery opening early 2015. To see more of her work go here: http://aliciagibson.net/home.html